Ancelotti: I am really proud of my team 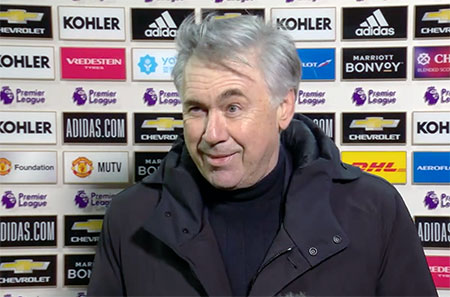 Carlo Ancelotti expressed his pride in his team after their second-half heroics at Old Trafford, saying that he felt Everton were worthy of a point despite not being at their best against Manchester United.

Goals from Abdoulaye Doucouré and James Rodriguez had hauled the Toffees back to parity after United appeared to be running away with the contest at half-time with a 2-0 lead but Scott McTominay profited from a slip by Robin Olsen to loop a header in to make 3-2 with 20 minutes to go.

The match was heading to a successful conclusion for the hosts when Axel Tuanzebe fouled his fellow substitute Josh King near the touchline, Lucas Digne swung in a free-kick that Michael Keane glanced on for Dominic Calvert-Lewin to knock down and then hook past David de Gea to grab a dramatic point with the last kick of the match.

It was only the second time that United had failed to win after leading 2-0 at half-time in the Premier League era and Ancelotti was all smiles afterwards.

“Wow! What a game — unbelievable,” the Italian exclaimed to the cameras. “Fantastic emotion… what can I say? I think we deserved [a draw] in my opinion even if in the first half we were a little bit shy with our play.

“We could have had more opportunities but in the second half we attacked with courage, we had good combinations up front, we pressed forward and at the end we deserved to have a point.

“I said to the players [at half-time] in the first half I think we started well. We were in good control but we lost the opportunity to cause more problems up front because we started to pass the ball backwards.

“And I said to the players, play with more courage, with more intensity, with more belief and that's what they did in the second half.”

Asked if he had almost substituted Rodriguez when Gylfi Sigurdsson appeared ready to come on just before the second goal, Ancelotti said:

“Yes, because he had a problem at the end of the first half. His calf was tight but he said that he wanted to play again, to try but after that he was really tired.

“It was a risk to put him back in but I was confident in him and he said, ‘No I am okay', and after 20 minutes I took him out.

“It's only one point but it's a deserved point and we did well against one of the best teams in the Premier League. I am still convinced we are not at the same level but we can compete with fire, we can fight with our qualities which we showed more in the second half than in the first.

“But it does't matter. I am proud of my team, honestly. I am really proud.”

Showing a bit of fight now, just need a couple more pieces to the jigsaw.

Now where have I heard that before?

He's spot on with this. As much as it pains me to admit it, we're not at the same level as Man Utd or Man City. We can beat anyone on our day, but we don't have the quality to do it consistently. Or at least not yet...

Pete Williams
8 Posted 08/02/2021 at 12:08:36
Fantastic spirit and attitude to come back twice, with Doucouré, Godfrey and even Davies showing up well, but some players still aren't up to the standard they should be. Digne and Holgate struggled, Olsen was less impressive and Richarilson is continuing a poor run of form.

Need to rest a few against Spurs as I think they will rest some too. Give Allan, Coleman and King some playing time, and maybe even Bernard too? We'll really want to have our best players fit and ready for the two games after that!

Lastly, I'm really glad we aren't still desperate to get to the 40 point safety mark any more and we can now get results against the so called big six. Makes games much less stressful, apart from non-performances like against the barcodes! Never dull though is it.

Tony Everan
9 Posted 08/02/2021 at 13:10:51
We are not at the same level, but we are getting there. Especially so as we have some really good young players who are still improving. Then two or three more who will be slowly introduced to the team.

On top of that the recruiting between Carlo and Brands has been an resounding success, especially when look at what went on before. Doucoure and Godfrey are exceptional signings, Allan and James top class footballers who fully expect to compete toe to toe with any Sky6 club. Those two bring a better winning mentality and expectancy to the team.

The next steps are to iron out the glaring inconsistency, great wins followed by a Newcastle type performance.

Carlo needs to work his magic on Richarlison to coax him back to form, to achieve something special we need him playing his best.

The fact that Tom Davies and Gomes are both starting to find good form and Allan coming back means we have got strength in depth now. That will keep us strong until the end of the season whilst other teams may struggle.

It’s a beautiful thing that we are fighting for a top 4 spot and also fighting for the FA cup. It’s great that there is a bit of optimism and everything is up for grabs.

To be honest we are ahead of were I expected us to be given the squad he inherited.
I thought it would be two years before we would be competing for 4th.
Still only just past the halfway mark but the signs are good.

John Keating
11 Posted 08/02/2021 at 14:00:32
Still a work in progress and a way to go.
Close season will be interesting with our recruitment as I am sure Ancelotti is still way short of what he wants to get us up there with the top teams.
Still there are signs that we are improving and after The United game I'm still convinced he is still having trouble getting his game plan across to certain players.
Brian Murray
12 Posted 08/02/2021 at 14:06:42
John. If that’s true about getting his plan or ideas across is true it explains a lot. Hope the the flip side of that is the caution in Carlo that showed when we got it back to two each he has no intention of trying for a winner at all until forced to have a go because of third goal. Either way he’s top notch and I love the fella. No daft excuses about cold feet like that whopper over the park as well 😂
Joe McMahon
13 Posted 08/02/2021 at 14:10:45
Tony @9, I fully agree we certainly are getting there. To think in 13 months the progress that has been made. The league is a lot harder than it was in the days of the 5/6th finishes 10 - 15 years ago, a lot more quality in many teams. With a summer window in 6 months time, Everton will be primed and ready (I think) to take on the top 4. It's probrably just gonna be out of reach this season and possibly too early for us also.

I just love this quote - "But it does't matter. I am proud of my team, honestly. I am really proud.” He's saying we, and he is just not here for the last big pay reward.

If us, West Ham or Leicester as splitting up the Sky 6 again then progress has been made.

Michael Lynch
15 Posted 08/02/2021 at 14:21:43
We've been mostly solid this season, but rarely exciting. Reminds me of many a Moyes team, the difference being that we've got more world class salaries, if not world class players, on the payroll.

I've been pleased with some of the results but also secretly relieved that I haven't had to drag myself up to Goodison this season to witness some of the turgid displays on offer. I'm hopeful that next season, with three or four additions, we'll catch fire and start looking like we can genuinely compete at the top four level.

In a strange season, with so many clubs under-performing, a top 6 finish would be a real achievement considering the way we've performed at times, but I'd be happy to save Europe for another year when we have a stronger squad.

Jamie Crowley
16 Posted 08/02/2021 at 14:43:23
“I said to the players [at half-time] in the first half I think we started well. We were in good control but we lost the opportunity to cause more problems up front because we started to pass the ball backwards.

“And I said to the players, play with more courage, with more intensity, with more belief and that's what they did in the second half.”

So it really was that simple? Huh. I and about 10 people on the Live Forum were saying the exact same thing. We weren't THAT bad, we just needed to play with more bravery and intent going forward.

Carlo's reaction is gold. He knows he's on the precipice of pulling off something monumental.

We're so close now I can taste it. I've never seen an Everton team finish above 5th. I'm beginning to believe this year we can break that glass ceiling.

Nick Strong
17 Posted 08/02/2021 at 19:02:58
We’re picking up points but not playing well. We give united far to much respect and nicked a last minute equaliser.
Why can’t we push on when we score instead of hanging on all the time we’ve been a bit lucky the last two games could have easily lost them both I just hope we take the game to Spurs instead of trying to nick it!!
Minik Hansen
18 Posted 09/02/2021 at 11:29:19
And it was without Allan, looking forward to him playing again. Gbamin must be eager to give it all as well, as the midfield is strong, and he must be focused to come back strong. Is he motivated to step in and help the team where it's needed? Time will tell.
If we reach Europe, some right players might want to stay, so let them have a go at it. COYB.
Jerome Shields
19 Posted 09/02/2021 at 14:18:48
We can all recognise an unEverton fightback. Something that we all have yearned for. Something it seems Ancelotti also yearned for and was equally happy with as us all when it finally manifested itself.

Whilst Everton do need better players in some positions, they also need to have a "fight back and never say die" attitude. The underlying benefit is a team that believes in the ability of Ancelotti and is prepared to listen to him and improve their individual performances according to his coaching, putting in the work to do so.

It is hard to predict Everton's team selection now, such is the depth of fine-tuning options Ancelotti now has in the Everton squad. Something he was prepared to develop by giving players out of position playing time and probably extra coaching support. The next game he may select none of his attacking players, saying they need a rest. Now he also has the benefit of an attitude change and Mina shouting and rushing about for the first time in his life.