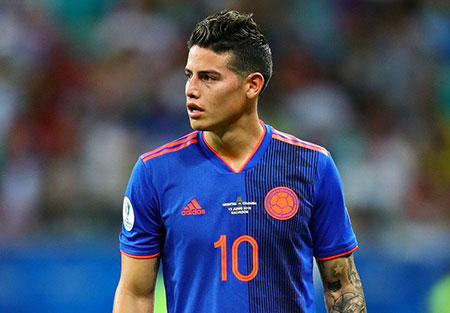 Everton's South American contingent are uncertain over whether or not they will be able to travel to represent their countries next month due to the United Kingdom's current travel restrictions that could be extended into April.

Under current Government mandates in place until the end of March, travellers arriving from “red list” countries that have been designated as high risk for Coronavirus variants must quarantine for 10 days, which would include players flying back from CONMEBOL World Cup qualifiers in Argentina, Brazil and Colombia.

Carlo Ancelotti has reportedly said that he will not release his players to red-listed countries without an exemption in place that would allow them to skirt quarantine requirements on their return.

James Rodriguez, Yerry Mina, Richarlison and Allan are four players who could potentially be affected as Colombia host Brazil on 25th March before the Seleçao face Argentina and Los Cafeteros travel to Paraguay on the 30th. (Portugal is also on the list but André Gomes is unlikely to be called up.)

Assuming any players involved don't arrive back in England until 1st April, it means that they would miss Everton's home game with Crystal Palace on the 3rd and the trip to Brighton on the 10th.

However, the chances that the Government will grant elite sportsmen special dispensation if the “red list” designation is extended appear slim at this stage.

“The rules are there for a reason,” a Whitehall source was quoted as saying by Sportsmail. “They are there because of the gravity of the situation and the risk of spreading strains of the virus.”

Another source in a different department said: “[The] same rules apply to everyone.”

Rodriguez, a Talisman for his country, spoke to AS Colombia on the issue this week and said he would have to wait and see whether he would be allowed to go.

"I don't know, really, because the issue is super complicated. When you leave, you have to do a 10-day quarantine when you return.

“I don't know how they are going to handle the issue, but they know that I always want to go to the national team. But I don't know; let's see what happens.”

To quote a certain RSM in an old sitcom, "Oh dear, how sad, never mind."

Alan J Thompson
2 Posted 24/02/2021 at 03:05:10
Interestingly, Australia and Qatar, who were invited to take part in this competition as guests, have withdrawn but the reason given by both is a clash with their World Cup qualifying games. If this means less games, could the start be changed?
Bobby Mallon
3 Posted 24/02/2021 at 09:54:51
Just play the games in a non-red zone country like the Champions League. Simple
Brian Harrison
4 Posted 24/02/2021 at 10:33:37
I don't see how you can get round the rules of people travelling from the red list countries have to be put into a secure hotel on their return and quarantine for 10 days and must have 2 tests in that time. Should they still be testing positive on their second test they have to spend a further 10 days in quarantine and have 2 negative tests before they can be released.

So quite rightly Everton are saying to our players wanting to go and play for countries in the red zone, sorry guys on this occasion you cant go.

I am really surprised that Japan are still insisting that they will host the Olympics this summer. can you imagine tens of thousands of athletes in the Olympic village, well good luck with that. We only have to look at what happened in Australia with the tennis and groups of players being on the same flight as someone who tested positive.

Kim Vivian
5 Posted 24/02/2021 at 11:56:01
With everything that us, the great unwashed, have had to endure for the last year barring a few weeks in the summer, is it really such a big ask for the players to accept the club digging their heels in over this? Not reading that they're kicking up over it, however, and I trust they will accept the club line.
Jerome Shields
6 Posted 24/02/2021 at 13:56:18
Rules around Covid are going to extend longer than most expect. As for Optimist Johnson and an end to lockdown. . . good luck.
Dennis Stevens
7 Posted 24/02/2021 at 19:28:36
As things stand, would they even be allowed to travel from the UK?
Brian Cleveland
8 Posted 25/02/2021 at 04:14:37
Dennis, entry requirement to Colombia is a negative test within 72 hours before travel, no quarantine required on arrival.
Andy Mead
9 Posted 25/02/2021 at 06:41:23
Surely common sense from the players would have them stay put? The virus doesn't discriminate rich from poor so why would footballers think they are worthy of flouting quarantine rules? Too much of a risk for any players to be traveling abroad atm.
Derek Taylor
10 Posted 28/02/2021 at 16:27:25
Because they are footballers, Andy. And live in a different world to us mere beings !