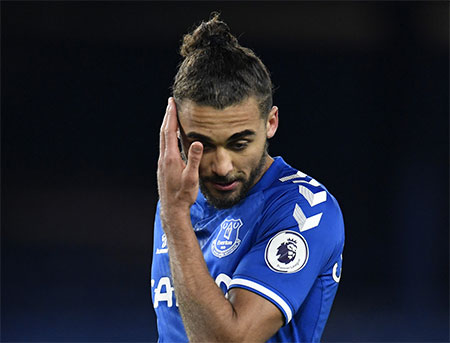 Everton suffered their fifth defeat in seven home games as they were beaten by Burnley to extend their perplexingly poor form at Goodison Park while losing ground in the race for the top four.

Impressive first-half goals by Chris Wood and Dwight McNeil stunned the Blues whose midfield was overrun by the energetic Clarets, and though Dominic Calvert-Lewin pulled the hosts back into the contest with a trademark headed goal, they couldn't find a way through in the second half.

With Abdoulaye Doucouré out of action for as many as 10 weeks, James Rodriguez being withheld until after the international break because of a calf issue and Gylfi Sigurdsson struggling with an ankle problem, Carlo Ancelotti tweaked his side by deploying Alex Iwobi and the tip of a diamond formation. Tom Davies was fit to start on one side, with André Gomes on the other and Allan as the holding presence in front of the back four.

Iwobi wouldn't make it to half an hour in his favoured central role, however, as Ancelotti was forced to retool his tactics once Everton had fallen 2-0 behind. But the Nigerian had been busy in the opening minutes, playing Richarlison in for the game's first chance which the Brazilian belted goal-wards, forcing a parried save by Nick Pope in the Burnley goal.

Iwobi then benefitted from a lucky bounce in midfield and again fed Richarlison but the latter's pass looking for Calvert-Lewin was overhit.

A quarter of an hour had elapsed when Davies was caught trying to shield the ball in front his defence and was dispossessed, McNeil's cross was deflected out to Wood on the edge of the box and the New Zealand striker picked his spot with an accurate curling shot inside Jordan Pickford's left-hand post.

Eight minutes later, Wood was in again as the visitors counter-attacked with a long ball forward but his shot deflected behind off Ben Godfrey before a strong claim for handball against Mason Holgate was turned down by Video Assistant Referee, Martin Atkinson.

That only delayed the arrival of Burnley's second which came via a piece of excellent play by McNeil. The winger ghosted away from his marker to receive a pass towards the Everton area, turned Allan and then whipped an unstoppable shot around Pickford and into the top corner with 25 minutes gone.

The hosts threatened to collapse a couple of minutes later when Johann Gudmundsson raked a shot onto the post but within five minutes Ancelotti's men were back in the contest thanks to a very good move of their own.

Once again, Iwobi was involved, as he laid the ball off to Davies whose pin-point cross picked out Calvert-Lewin in the centre and he powered home a header from a central position.

Straight after the restart, Gomes found Richarlison with a nicely-weighted forward pass and, ignoring Iwobi to his right, the Brazil international fired a shot searching for the far corner but Pope made the save before Calvert-Lewin steered a header from a free-kick disappointingly over the bar.

At the other end, though, Burnley remained a threat and when Iwobi was robbed of the ball, Godfrey had to block McNeil's shot and Gudmundsson shot wide while Josh Brownhill was saved by Joao Virginia who had come on for his Premier League debut a couple of minutes earlier when Pickford was forced off with an injury.

If Calvert-Lewin's goal had provided Everton with the platform they needed from which to complete their recovery and go on and win the game in the second half, the Blues proved incapable of doing either. Perhaps most concerning for Ancelotti was that it wasn't for the want of trying; his charges were largely frustrated by Burnley and were limited by their own attacking failings.

Gomes forced the first save of the second period with a low, left-footed shot that Pope palmed wide in the 47th minute and a minute after that Lucas Digne delivered an excellent cross for Calvert-Lewin but the striker got his header all wrong and it went well wide of the target.

Michael Keane couldn't wrap his leg around a free-kick in the 58th minute and sent it just as far wide off his knee while Digne spurned the first of a handful of corners with poor deliveries that were either under-hit, over-cooked or deposited into the goalkeeper's arms.

Davies was removed in favour of Josh King in the 66th minute and while the forward added some pace and strength to the Toffees' attack, it didn't result in much more penetration up front. Instead, Burnley almost extended their lead but Ben Mee's header bounced off the crossbar and both Matej Vydra and substitute Jay Rodriguez forced further saves from Virginia.

Seamus Coleman came off the bench for Holgate and had a late shot blocked by Mee who had got in the way of another goal-bound effort a few minutes earlier but Everton would remain shut out and were forced to reflect after the final whistle on another damaging home loss.

Even accounting for key injuries, perhaps the most concerning aspect of this match was that for almost all of the second half, this was Everton more or less at full tilt… but they were tilting at windmills rather than making genuine inroads into the Clarets' defence.

There was enough purpose and energy about the Blues but the final product was often woefully inadequate from the likes of Iwobi and Digne, the decision-making or tough too often suspect from Richarlison and Calvert-Lewin, and the first instinct was too often to play the ball backwards rather than gamble on moving it forwards — to the point where the result felt depressingly pre-ordained.

Ancelotti now needs to pick his men up for what seems an impossibly big task against Manchester City in the FA Cup next weekend, one where they will somehow need to be much stronger in midfield and significantly more productive up front if they are to have any hope of progressing to the last four of the competition.