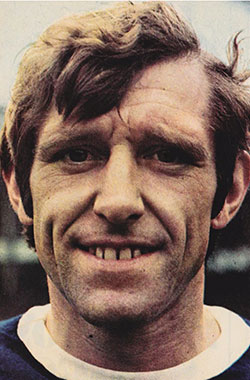 When Keith Newton walked into Everton’s Bellefield training ground, shortly before Christmas 1969, it appeared to be a sporting match made in heaven. For Newton, the classy Blackburn Rovers full-back, it offered a chance to demonstrate his skills with one of the finest footballing sides of the era – and cement his place in Alf Ramsey’s 1970 World Cup plans. For Harry Catterick, the Mancunian – equally adept in either full-back position – fitted the bill as Ray Wilson’s successor and was expected to the aid the club’s push for the Football League title.

Come the spring of 1972, Newton departed Everton without fanfare, after less than 60 appearances, on a free transfer. He’d dropped out of favour and found himself displaced by Henry Newton and, subsequently, John McLaughlin. He was snapped up by Burnley and revitalised a seemingly moribund career. How did it come to pass that this partnership, one that promised so much for both parties, delivered so little?

This is just one of the questions I consider in my newly published book – The Keith Newton Story. This short biography (60 pages, with many rarely seen images) covers the highs (including 27 caps and a League Championship medal) and lows of Keith’s playing career at domestic and international level. It also looks at this easy-going family man off the pitch. It draws on contemporary press reports and interviews with family members, supporters and teammates. 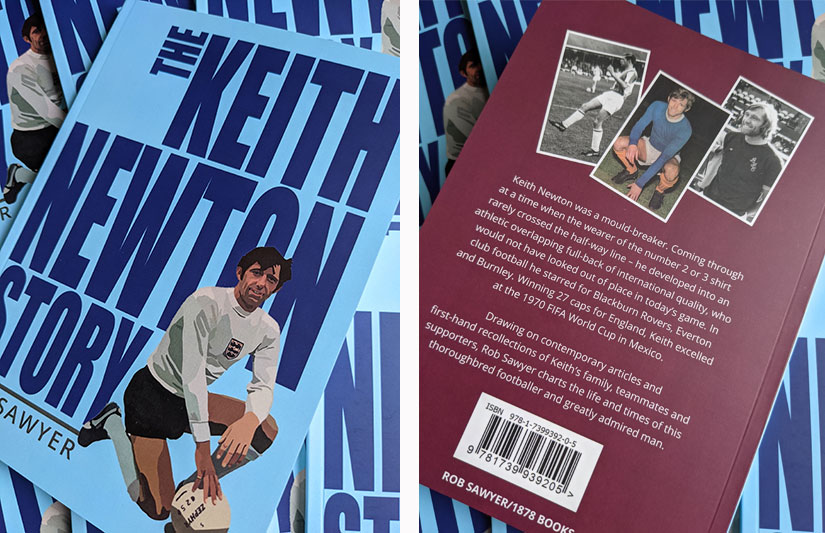 The self-published book, with design work by Thomas Regan of Toffee Art, is priced at £7 (£8 with p&p) and can be ordered by contacting me via Twitter (@robsawyer70) or rsneston@gmail.com. I’ll also be selling copies at the Everton Heritage Society exhibition at St Luke’s church hall on Sunday, prior to the West Ham match, between midday and 1:30pm.


Dave Williams
1 Posted 15/10/2021 at 09:45:21
An intriguing choice of subject, Rob. He always struck me as someone who clearly had the ability to do well with us but was thwarted by Tommy Wright, who was himself a current England international at right-back, but then the unremarkable McClaughlin on the other flank.

After such a short and undistinguished Everton career, what was it that prompted you to focus on him?

Chris Williams
2 Posted 15/10/2021 at 11:02:17
Interesting subject, Ray. Another good footballer who didn't quite do it for Everton for some reason. To be replaced by ‘Tiger' must have been a slap in the face. Not great having an out-of-position Henry Newton playing in place of him either. Who in turn never quite did it for us. Henry's Hammer stayed firmly in the toolbox! Except maybe once.

I remember in the World Cup 1970, England played Romania, and Tommy Wright was hacked down by their left-back I think. Keith came on to replace him and was also hacked down by the same player. Terrible tackles I can still recall today. (I think!)

1970 the high and then that week in spring 1971. The succession of dodgy / unsuccessful players... Newton, Tiger Mc, Peter Scott (not the birdwatcher), Steve Seargeant, Joe Harper. And then... drum roll... Rod Belfitt.

I went to University in 1971 supporting one of the most respected sides in the UK. I left in 1974 supporting a car crash.

Rob Sawyer
4 Posted 15/10/2021 at 13:24:13
Hi Dave (1). I have often pondered why Keith’s Everton career did not pan out as it should have done - and became symptomatic of the malaise enveloping the club, post 1970. I have family links to Blackburn Rovers, also, so this spurred me to research an article which grew into this short biography. By turning it into a 60-page book I could also raise funds for East Lancs Hospice.

Chris (2) It was Keith who was hacked down in the 1970 game against Romania. Tommy Wright came on his place (and got a kicking, too) and also played in the following match. A fit-again Keith then came back into the side.

Ken Kneale
5 Posted 15/10/2021 at 13:35:44
Hi Rob - thanks for another interesting looking book to add to my Christmas list - as you say, somewhat of an enigma at Everton sadly - a talented and ahead of his time footballing defender who ought to have slotted seamlessly into a marvellous football team and for a likely myriad of reasons, it never worked out for him or the club.

Alan (3) flashbacks indeed - I was somewhat behind, entering Secondary School as FA cup losers, then Champions then ending School years as chumps. Little did I realise that other than a spell in the '80s, that was to be the high watermark.

I guess Keith joined at a peak, and a pretty rapid decline set in, almost immediately. Harry lost his health and touch, and the internal supply line wasn’t producing the Harveys, Husbands, Royles, Kenyons, Hursts, Wright’s any more. Add in injuries to key players and Ball falling out with everybody and getting sold and you have a perfect storm.

You have to have a bit of sympathy for Keith Newton, it wasn’t what he signed up for. Me neither!

Teddy Draper
7 Posted 15/10/2021 at 16:17:40
Ah yes, as soon as I saw the name Keith Newton memories came flooding back. 50 odd years is a long time to remember details especially when I was in my thirties then. Keith was a very good full back and I’m my opinion would have held his place in the present Everton set up. What prompted me to post today was a flashback ( no doubt John Mcfarlane Snr can verify this ) of Alan Ball running quite a few yards of the pitch to give him what appeared to me to be a right roasting, almost coming to blows! Those were the days when I never missed a game. All my best to Usual suspects, I’m not going out nowadays but still cheerful and reading all the posts. A special mention to John Hall, Derek, and Stephen. Love you all. Teddy.
John McFarlane Snr
8 Posted 15/10/2021 at 17:15:15
Hi Teddy [7] although I wasn't at the game I recall the incident, it was at Elland Road and I believe that Alan Ball gave Keith Newton a roasting, I'm not sure if Ball was captain at the time but it didn't sound a pleasant experience for Newton.
Peter Mills
9 Posted 15/10/2021 at 21:59:12
Harry Catterick signed Keith Newton in the aftermath of the 0-3 “Sandy Brown derby” in December 1969. Keith's debut was in the next home game, a fortnight later, in the snow.

But Keith was a right-back. He did an adequate job at left-back for a dozen games without being outstanding, before getting injured and Sandy stepping in to perform admirably for the rest of the season.

Keith and Tommy Wright both got done by Mocanu, the Romanian, a dirty bastard, in the World Cup, and neither player was the same again.

I'm a bit behind you. I started school in September 1969. We were Champions in my first year in the Infants. I was at University the next time we chuffing-well won anything.

I remember us signing Keith Newton and getting his autograph just after he arrived. He was bought as a permanent replacement for the great Ray Wilson, even though he was generally a right-back. I was surprised to hear that he received a medal when we won the League, as I thought that at the time you had to have played in 15 matches to receive one.

He always seemed to me, as good a right-back as he undoubtedly was, a square peg in a round hole. He was also unlucky, in that he joined the club at the height of success but also on the cusp of decline, the reasons for which have long been debated. If the team had not declined so rapidly the season after winning the title, then maybe his time at Everton would have been very different.

In hindsight, a natural and younger left-back would have been a better option. A David Nish, perhaps, who captained the Leicester 1969 Cup Final side and won the League with Derby County in 1975. The history of Everton Football Club is unfortunately full of 'what ifs'.