Impressive Blues ease past Brighton on the south coast 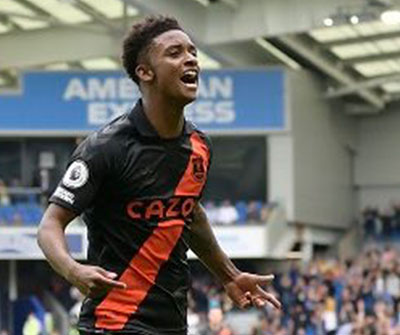 Everton produced an excellent away performance to extend their unbeaten start under Rafael Benitez to four games in all competitions as they comfortably beat Brighton at the Amex Stadium.

Demarai Gray notched his second goal for the Blues and Dominic Calvert-Lewin made it three in three Premier League matches before he was forced off with injury while Allan and Abdoulaye Doucouré turned in powerhouse displays in midfield to dominate the contest.

With neither Yerry Mina nor Ben Godfrey included in the matchday squad, Evertonian concerns were centred on defence and it looked as though Brighton, who came into the game with a 100% record from their first two League games and made the early running today, were going to cause the back line plenty of problems.

Neil Maupay fired a dipping shot just over from distance in the 12th minute and Alexis Mac Allister saw a shot of his own deflected over by Michael Keane but the visitors visibly grew into the game as the first half progressed and Andros Townsend was the first to test Robert Sanchez with a low drive that the keeper did very well to turn behind.

Richarlison smashed a half-volley into the stands as Everton began to assert themselves further but they broke the deadlock five minutes before the break thanks to a fine, direct move instigated by Allan.

The Brazilian picked out Gray's run with an excellent pass and the winger drove past Adam Bennett before drilling the ball across the goalkeeper and into the far corner to make it 1-0.

Calvert-Lewin then collected Allan's smart back-heel as the Toffees looked to double their lead before half-time but his shot flashed across goal and wide of the far post.

Brighton began the second period with purpose and when substitute Joel Veltman crossed low for Leandro Trossard, his shot was stopped by Keane but when Doucouré was adjudged to have committed a foul just outside the box, it have Pascal Gross the chance to repeat the feat he achieved in this fixture two years ago with a direct free-kick.

Jordan Pickford was equal to it this time, however, the England man making a terrific stop as the shot flew through a gap in the defensive wall before Veltman blazed over from 20-odd yards.

A minute later, though, Everton were handed a chance to make it 2-0 when Allan threaded a perfectly-weighted ball inside the full-back for Seamus Coleman and Veltman sent the Irishman sprawling in the box. Referee Jon Moss pointed to the spot and Video Assistant Referee Simon Hooper backed up his decision but Richarlison caused unnecessary stress for Calvert-Lewin by grabbing the ball and insisting on taking the penalty.

Coleman and Townsend eventually pulled rank and insisted that the designated penalty-taker get the ball and Calvert-Lewin stepped up to confidently power the ball under Sanchez's dive to put the Blues into a strong position.

Pickford beat away an effort from Trossard as the hosts tried to get back into the game straight away and the Belgian had a free-kick deflected behind but it was Everton who looked the more likely to add to the scoring in the closing stages, even after Calvert-Lewin had to come off with what looked to be a thigh strain.

Richarlison lashed wide from the angle, Doucouré forced a save from Sanchez on the counter-attack and Alex Iwobi also had a late shot blocked as Benitez's men saw the game out with laudable composure.

The win keeps Everton among the early front-runners in the Premier League and represents a great start to Benitez's tenure.