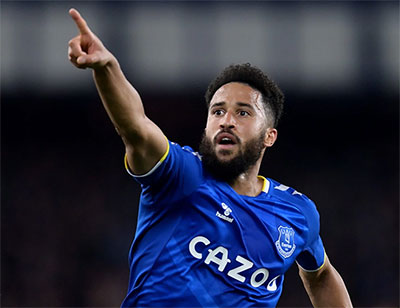 Everton came from behind for a second successive home game to eventually sweep Burnley away at Goodison Park which was bouncing by the end of what had at one stage threatened to be a frustrating evening under the lights.

The Blues had toiled through a disappointing first half, playing with a five man defensive formation under Rafael Benitez for the first time, and fell behind early in the second half to a Ben Mee header, a goal that evoked painful memories of a string of home defeats under Carlo Ancelotti last season.

Rather than wallow in impending defeat, however, Everton responded in almost immediate and irrepressible fashion, scoring three goals in six mesmerising minutes — the pick of them coming like a rocket off the boot of Andros Townsend — and coming close to adding a fourth soon afterwards but Abdoulaye Doucouré's effort was ruled out for offside.

The home side's rapid shift in gears put the game beyond Burnley who had enjoyed much the better of the first half as they sought their first victory of the new season. Though they set their stall out early with an ugly challenge by Josh Brownhill on Richarlison and frequently delayed proceedings by dallying with throw-ins, the Clarets actually dominated possession for long periods and played some useful football.

Sean Dyche will feel as though his men should have been ahead by the halfway stage after Chris Wood passed up the chance to head them into a seventh-minute lead that was served on a platter for him by Dwight McNeil's wicked delivery from their left flank.

Wood had another opportunity when Harvey Barnes dummied a cross from the opposite side but the big striker's shot was deflected behind and Mee put a header wide from a corner as Jordan Pickford struggled to deal with the delivery into his six-yard box.

For their part, what early purpose there had been from Everton, who were without the injured Dominic Calvert-Lewin, quickly fell away and the lack of quality or ability to control midfield meant that they were unable to create may openings in the first period.

Their best chance fell to Doucouré off Townsend's pass which the Frenchman took in stride and then fired across goal towards the far corner, prompting an impressive one-handed stop from Nick Pope in the Burnley goal.

Rather than introduce more ideas off the bench where the likes of Alex Iwobi were awaiting the call, Benitez opted only to switch the positions of Michael Keane and Ben Godfrey in his three-man central defence at the start of the second half, one that began in similarly physical fashion as the first as James Tarkowski scythed through the ball and Richarlison, eliciting anger from the Blues' defence.

Three minutes earlier, Brownhill had dragged Townsend down and been booked, with Lucas Digne firing the resulting free-kick off Wood's head in the defensive wall, while Townsend was harshly booked himself by referee Martin Atkinson for felling Charlie Taylor.

Everton initially repelled the free-kick but the ball came back out to Johann Gudmundsson and when he swung it back towards the six-yard box there were three claret jerseys queuing up to nod it home, with Mee stealing in behind Yerry Mina to grab the goal in the 53rd minute.

The equaliser would arrive within seven minutes and just as Benitez was preparing his first change in order to try and alter the course of the contest. A short-corner between Digne and Demarai Gray ended with the latter firing disappointingly into a defender but the ball was retained by the Blues, worked to Townsend on the opposite flank and he whipped a perfect cross onto the head of Keane who just had to guide it past the stranded Pope to make it 1-1 on the hour mark.

Five minutes later, the game had been turned on its head in the same manner Everton had flipped it on Southampton a month ago on the opening day. A mis-placed ball by James Lowton was seized on by Allan and worked quickly to Doucouré who picked Townsend out midway inside the Burnley half.

The winger shaped to go down the outside, cut back inside with a couple of touches and then unloaded a quite magnificent left-foot shot from 30 yards out that crashed into the top corner leaving Pope with no chance.

Just over a minute later it was 3-1 as Burnley's attack following the restart was broken up in Everton's area, Townsend knocked the loose ball to Doucouré who spotted Gray's run through space in the centre-circle and released him with a perfect pass that allowed him to bear down on keeper and bury it past him in front of the ecstatic Park End.

Less than two minutes later, the ball was in Pope's net again, this time converted by Doucouré from close range but the midfielder was correctly adjudged to have been marginally offside.

Townsend went for a repeat of his earlier brilliance with another belter from distance that was searching out the opposite corner of the goal before Pope parried it away and substitute Andre Gomes fired just wide as the hosts threatened to turn it into a rout.

There was a late cameo for another new signing, Salomon Rondon, but Everton were content otherwise by that stage to see out their second 3-1 home win of the campaign and move joint-top on points in the Premier League table.