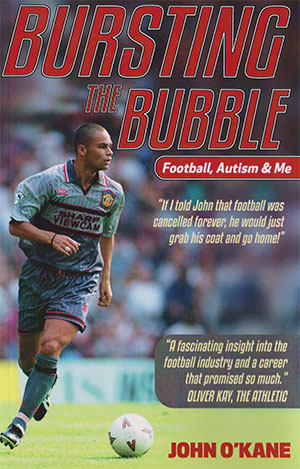 John O'Kane has written a frank account of his life in football, which began in earnest at Manchester United, where he won the FA Youth Cup in 1992, but saw him move to Everton for a career that would span parts of 3 seasons from January 1998.

Before he left Old Trafford, Sir Alex Ferguson would say to him: “You are better than Gary Neville, you just have to sort your head out.”

Not one of the easiest things to do, it turns out, for a player who says: “I was just a bit different.”

This is a man who was fighting a battle inside his own head, who has since found his sense of self-worth by working in the care sector rather than up and down the flank of a football pitch.

“You have to be like a robot, basically. You have to eat, sleep and breathe football. I just was not one of those characters. It was not in my make-up to be that robot.

“It was not that I did not take it seriously. I just had other things on my mind.

“I was more of a free spirit. That came from my mum, really. If people give me shit then I go against that. That is classed as having a bad attitude. You cannot do that in football. You have to be a yes-man.

“I had my own mind but you cannot really have your own mind in football. You have to follow what the manager tells you. They treat you like a baby and I wasn't.

“He did enjoy a good relationship with another legendary coach, Everton boss Howard Kendall.“He was a great man-manager. That was why leaving United was not a devastation. It was more a feeling of excitement. A new challenge. A new manager who wanted me."

But after the thrill of being involved in Everton's last-day survival — "part of me wishes I had stopped then" — Kendall's successor Walter Smith wanted little to do with him and his career began to spiral.

After playing only 12 league games for Everton, a loan move to Bolton Wanderers for John O'Kane was converted into a permanent deal in December 1999.

The book is called Bursting the Bubble: Football, Autism & Me. Quotes are from an Exclusive Interview with Sky Sports.


Christy Ring
1 Posted 01/10/2021 at 16:34:14
He had so much potential and part of the team of '92, sad to see he retired at 28, and it mustn't have been easy as he said himself being in the spectrum. I'm not surprised Walter Smith ignored him, he got rid of our young talented players Jeffers and Ball, and brought in Dad's Army.
Barry Rathbone
2 Posted 01/10/2021 at 16:55:11
My wife reckons I'm on the spectrum for a whole host of reasons but it can't be so. I doubt I'm the only one who dances and sings Elvis prior to taking the dogs out causing them to bark, fight and charge around the hall like lunatics

Kieran Kinsella
3 Posted 01/10/2021 at 17:07:26
I remember when we signed him it was viewed as a good deal but I barely remember seeing him play. It's a bit like with Paul Holmes, Kenny Sansom, Alec Cleland, Tony Thomas, Marc Hottiger. . . . we seemed to go through an awful lot of full backs who made little impression in those days.
Robert Tressell
4 Posted 01/10/2021 at 17:29:19
I expect that an awful lot of more troubled talents have neurodiversity issues, which then lead to things like under achievement and drink. As we learn and understand more about these things, hopefully fewer will fall by the wayside. We could do with fewer robots and more individuals.
Mike Gaynes
5 Posted 01/10/2021 at 18:07:25
Fascinating.

We who criticize professional footballers for having "attitudes", or being "ungrateful" and "spoiled", or even for having allegedly "sulky" facial expressions, really have absolutely no clue what's going on inside the minds of these complex, pressure-shaped young people.

And the "shut-up-and-play" supporters who openly sneer at the mental and emotional health issues of these athletes serve only to display their own. Ignorance and lack of empathy are themselves emotional illnesses.

I applaud John for his willingness to be so open about his challenges, and for recognizing that despite his natural talent, his place was not on a football pitch. It's great to see he has found a happy and fulfilling life.