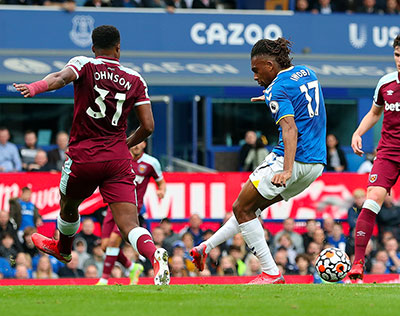 Everton lost at home for the first time under Rafael Benitez as a second-half header by Angelo Ogbonna edged an engaging contest for West Ham.

A match that always promised to be keenly fought and tightly contested proved to be just that and the Blues will rue the absence of two key missing players in the form of Richarlison and Dominic Calvert-Lewin for the fact that they were unable to claim at least a point.

In their stead, Alex Iwobi squandered Everton's best chance in the first half and Salomon Rondon glanced another opportunity just wide in the second before the hosts' vulnerabilities at set-pieces proved decisive 16 minutes from time as David Moyes's Hammers scored off a controversial corner.

West Ham were billed as the toughest side that the Toffees have faced this season so far at Goodison Park where they had a 100% record before today and that was underlined by the visitors' strong start to the game.

The Londoners controlled possession for much of the first half but had little to show for it until Tomas Soucek put the ball in the net following a save by Jordan Pickford 10 minutes before half-time only to have his goal ruled out for offside.

In between, Everton had been trying to make the most of their increasing opportunities and had a couple of half chances before Iwobi was handed a gilt-edged chance to open the scoring in the 28th minute.

Terrific work by Demarai Gray that saw him shimmy past his man down the right flank and centre behind the last line of defenders meant that Iwobi only had to connect with the ball and he would surely have scored. Instead, however, the Nigeria international missed his kick completely and the chance went begging.

Iwobi almost redeemed himself with an assist a few minutes later but Lukas Fabianski got a crucial hand to his cross from the left while Abdoulaye Doucouré's header from Andros Townsend's cross dropped just wide of the far post a minute later.

At the other end, Everton's back line had to block successive efforts from Jarrod Bowen and Said Benrahma following a corner and were fortunate that Pablo Fornals curled wide when left all alone to size up a shot from the edge of the box as the Blues failed to get the ball clear.

With Everton coming out of the half-time interval in much more purposeful mood, the second period was a much more even affair in terms of possession and it was the home team who carved out the better openings.

Gray's hammered ball across the face of Fabianski's goal wasn't sufficiently anticipated by Rondon while Iwobi turned smartly on Lucas Digne's low cross but saw his accurate shot blocked behind.

Two minutes later, Townsend curled a delivery in from the opposite flank but Rondon's flicked header needed just a bit more purchase than he managed in order to steer it inside the far post.

In the 73rd minute, the same combination ended with Fabianski catching Rondon's header as the Venezuelan striker's search for his first goal back in the Premier League continued.

A minute later, after referee Stuart Atwell awarded West Ham a corner despite an apparent foul by Michail Antonio on Pickford and doubts over which player got the last touch, the visitors grabbed the winner.

Half of the goals Everton had conceded already had come from set-pieces while Moyes's Hammers are renowned for their prowess at dead-ball situations so it was, perhaps, not surprising that that was how they won the match.

Bowen whipped his corner in from the West Ham right and Ogbonna rose above Ben Godfrey to bury a header into the net before Pickford had had time to react.

Everton tried to rally with the fans urging them on from the stands but the shape of the game no longer suited their most effective playing style. With the Hammers digging in and denying them space, routes to goal were routinely blocked.

Rondon won a corner but Godfrey couldn't keep his volley down and it flew over in the 81st minute and the young defender would have the last chance, also from a corner from the right, but this time it was his header that was too high to trouble the opposition keeper.

In between, it was a crucial intervention by former Everton defender Kurt Zouma that denied his old club a point. The ball fell to Gray in a central position in front of goal but his goal-bound shot deflected off Zouma and behind.