Happy Birthday to an Unsung Hero

Today, 3 November, sees the 76th birthday of one of the unsung heroes of the Championship winning team of 1970. 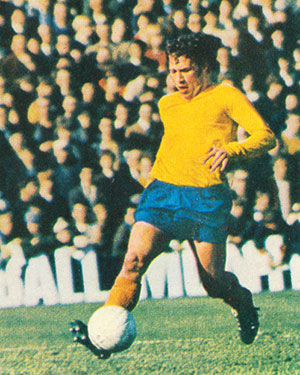 Today, 3 November, sees the 76th birthday of one of the unsung heroes of the Championship-winning team of 1970. When one of the Holy Trinity was not available, the go-to stand-in was Tommy Jackson! Tommy was signed from Glentoran of Northern Ireland, for whom he played in 35 internationals.

He signed for the Blues in February 1968 and over two seasons made some 32 league appearances including 18 in the title-winning season. He was not the quickest or most creative player I have ever seen but he was the perfect stand-in for any of Kendall, Ball or Harvey.

He was energetic, hard working, and had good defensive skills. In the first half of that season, he stood in admirably and only lost his stand-in role when Alan Ball was unjustly banned for six games by the FA. This also coincided with the revelation of Alan Whittle who scored many important goals in the run-in to the title. 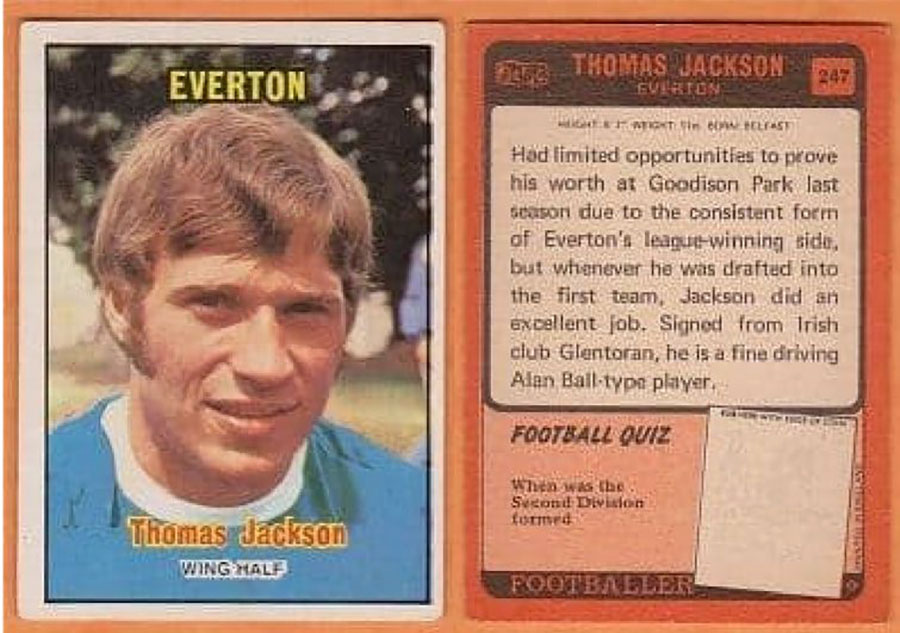 His performances as understudy to the likes of Alan Ball and Howard Kendall attracted the attention of other clubs and, after just 32 league appearances for Everton, Jackson was signed by Nottingham Forest in October 1970. He then went on to Manchester United before returning to Ireland as player-manager of Waterford Town.

He eventually arrived back as manager at Glentoran, where he spent nearly seven very successful seasons. Somehow, he was never called upon to manage Northern Ireland and was unfortunate to be in the shadow of Billy Bingham's long reign in the post.

So, I am going to raise a toast to Tommy Jackson who never let us down on the road to the 1970 title!

I remember Tommy stepping into the team for the 1968 FA Cup semi-final against Leeds at Old Trafford, not a match for the faint-hearted. He performed very well, as he did whenever called upon over the following couple of seasons.

Best wishes to him.

Like you say, Tommy was always a very capable stand-in for the Blues. In fact, looking back there wasn't a lot of difference, performance-wise between him and Henry Newton who came to Everton for £150,000 from Notts Forest with Tommy going on a free to Forest.

Going back to that cup game with Leeds, didn't John Hurst drop out as well with Roger Kenyon slotting in his place?

All the best, Tommy – to stand in for geniuses takes some cojones!

Roger Kenyon stepped in for Colin Harvey at Leicester in the 3-1 quarter-final win then, as you say, for John Hurst in the semi. He was also, of course, sub for the final.

I don't recall a more versatile player, which in some ways was why he was probably a manager's dream. In another sense, maybe that was an issue for him in being able to nail down a regular position. What was his best position?

I don't know that answer, by the way.

As well as the challenge of trying to get into the best team in the land at the time!

I have one question to ask the ToffeeWebbers: During that great season when Tommy stood in for the Holy Trinity, I seem to remember it was Frank Darce who was mostly named on the bench and not Tommy... why?

One... how many times did the Holy Trinity actually play together that season? (Reminds me of Brian Labone's tongue-in-cheek comment that it was the first time three men won the league.)

Two... my recollection is that, in those days, players (Alan Ball) were banned for weeks, not games? And so it depended on how the fixtures fell as to how many games were missed.

I have banged on ad nauseum about how the best football I've witnessed being in 1968-69. The Trinity was inspired.

We added steel in 1969-70 with admirable squad players like Jackson and Sandy Brown... plus beans on toast of course. We battled and scrapped for a lot of single-goal triumphs.

Just my two pennorth but I always thought the purchase of Henry Newton signified the beginning of the end for the great Catterick era. He was poor.

Didn't Henry Newton win a title with Derby County? Same with Rioch. True to form – as soon as they join us, they turn bang average.

I'll never forgive or forget Henry Newton at Anfield, when we was two-nil up, he kept giving the ball away before the usual collapse.

Ray Roche
12 Posted 05/11/2022 at 09:43:30
Alan, I'm fairly sure that I read that the Holy Trinity only played together 50% of the games that season. At least one of them was missing for half of the League games, which emphasises how important the likes of Jackson, Harper, Richardson and Brown were in days of one substitute.

Didn't Harvey miss quite a few games with an eye injury?

As a sub, Frank Darcy was used 5 times; on 3 of those occasions, Tommy was already on the field. Jackson was the replacement when Kendall or Harvey were out; he racked up 14 appearances and only 1 more as the sub.

The book doesn't list who the sub was if unused, and as for Why Darcy? He only appeared as a sub (echoes of Sandy Brown? Maybe Catterick's Way???).

Dave Mackay did either Colin or Jimmy Husband. Who would have been the other villain?

Don't recall the Harvey incident. There were so many villains in those days, it would require a thread of its own!!

By chance, I came across a YouTube video recently of Norman Hunter "tackling" Howard Kendall. Check it out if you can. I am amazed, truly, that Howard ever played again.

I think the big dirty Yorkshire gobshite received a ticking off.

Yes seen it on Kendall. No wonder we could never win there. I'm sure Morrissey went looking for Hunter after that. Classy but fearsome winger.

Alan J Thompson
20 Posted 05/11/2022 at 17:19:15
Jack Charlton famously said he had three names in his black book that he wanted to meet again and while they were never disclosed it was said that one of them was an Evertonian.

And Dixie Dean was once asked if he ever held a grudge off the pitch to which he answered that he lost a testicle playing football and he ran into the player responsible outside a night club and gave him what for.

Tommy Jackson, has anybody ever been understudy to a better midfield and wasn't Alan Whittle in the same role when Tommy moved on?

Alan J Thompson
21 Posted 05/11/2022 at 17:19:31
Jack Charlton famously said he had three names in his black book that he wanted to meet again and, while they were never disclosed, it was said that one of them was an Evertonian.

And Dixie Dean was once asked if he ever held a grudge off the pitch to which he answered that he lost a testicle playing football and he ran into the player responsible outside a night club and gave him what for.

Tommy Jackson, has anybody ever been understudy to a better midfield and wasn't Alan Whittle in the same role when Tommy moved on?

Keith Newton was injured at Tottenham in March 1970, and Sandy took over at left-back for the rest of the season. I can't recall how many times Frank Darcy was a sub after that, but I suspect often as he was a left back, so if a player was injured Sandy would take up that player's role and Frank would come on to fill in at No 3.

Frank was certainly the sub the night we clinched the title against West Brom.

Just saying what my Dad told me through his contacts with a former RS chairman in the sixties!