Light at the end of the tunnel for Townsend 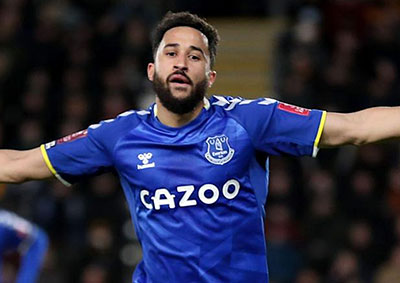 Andros Townsend has spoken of how pleased he is with the pace of his recovery from a torn anterior cruciate ligament in his knee and he feels like he could emerge from his rehabilitation in the best physical shape of his career.

Months of rehab work in consultation with a specialist in Qatar has helped him along the road to recovery and while there is still no timetable on his return, he is looking forward to the day he can get back out on the pitch for the Blues.

“'[The only thing] that’s been on my mind is how can I get back bigger, better and stronger? he said on evertontv. “I’ve been working on strengthening my hamstrings and my calves. I’m in the best shape I’ve ever been body-fat wise and weight-wise. Hopefully that stands me in good stead when I do return.


“The next step is to try to reintegrate [into the squad]. With an injury like this, it’s all about hitting markers. Your jumps need to be at a certain height, your quads at a certain strength.

“After hitting those marks, it’s about reintegrating, looking at when I can join in during a warm-up, do a passing drill, then, of course, getting back to full training.

“I’m just over five months in now [to my rehabilitation plan] and there is still time to hit those markers and progress how I want, so I believe there is light at the end of the tunnel.”

If he's back on the pitch in February, that'll be a triumph.

And we still have a place for a guy who can crack a shot like he can.

He's industrious, great for the team morale and has a hell of a shot on him... not a bad crosser of the ball as well.

Denis Richardson
4 Posted 16/09/2022 at 18:24:29
Injury was a big shame as I think he's been a really good signing. However, although things are going well on the recovery, it'll likely be near Easter before he's fully fit and match fit.

He's not going to be a big part of our season, at least I hope he won't be as it means we'll be up Shit Creek come March!

Unless of course he comes on to score the winner in the semi to take us back to Wembley.... got to keep on dreaming.

I could be wrong but if his contract is up at the end of the season we may have already seen the last of him in a blue shirt.

When fit he will provide competition to the wide spots in the team on either flank. Maybe another contract would make sense rather than let him walk away on a free.

On the other hand, as Rob says, he's out of contract at the end of the season, and I'm sure in his mind he's got a much better chance of coming back if he's out on the pitch, contributing. I would like to see it work out, because he's an honest, hard-working pro with a good attitude, and there's always a place in the squad for someone like that.

To my mind, Andros always seemed to be a model professional and he has been a big miss from the squad. He was really unlucky to get such a serious injury at this time in his career, let's hope he will make a full recovery.

Maybe someone will draw his attention to these posts and this will give him further encouragement.

Danny O’Neill
12 Posted 17/09/2022 at 08:44:40
I admit to forgetting to mention Townsend when I talk about leadership and experience. He brings that to this squad and it shouldn't be underestimated.

And commitment with desire. I didn't see it at the time as I was in the Lower Bullens, but those scenes of him limping and hopping down the touchline after Dominic's winner against Palace, to join in with the team, spoke volumes. He probably put weeks on his recovery from a serious injury. But it didn't matter, he wanted to be there.

Great goal against Burnley. He has a hell of a strike on him if we can create space for him to get an eye on goal.

Tony Abrahams
13 Posted 17/09/2022 at 09:29:06
Agree with most of the above posts, because there is nothing to dislike about Townsend, so I hope he makes a complete recovery, and still has something left to offer.
Colin Glassar
14 Posted 17/09/2022 at 09:51:18
Even though he doesn't have much of a future at Everton, I recognise his contribution to the cause. He's an honest pro who tries his best.
Sam Mellor
15 Posted 17/09/2022 at 09:57:55
Got to echo all the above, he seems like a great pro in terms of his attitude and always comes across well when I hear him speak. With quite a few young players in the squad now, definitely one to keep around for them to learn from.

Plus he's good for a couple of long-range strikes a season.

But he did overdo it on the field, getting himself that injury. Sure he worked hard on his recovery.

With funds still a challenge, we could save the money on a winger and use Townsend and invest in a goalscorer.

For all the industry of our centre-midfield, none of them will hit more than 5 goals in a season so we need more goals.

There really is no need to rush him back because we don't need him at present, but he would be a great addition to the bench when things get really hectic later in the season.

Andros, hoping your recovery continues to go well and you hit those key marks.