Gordon: I was never desperate to leave Everton 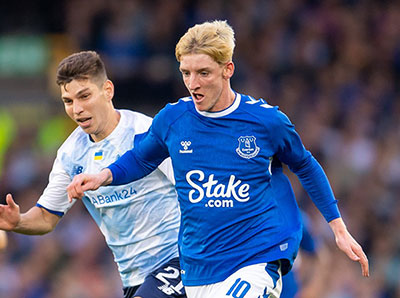 Anthony Gordon has opened up about the 'crazy money' involved in football after massive bids for him were rejected by Everton in the summer and insists that despite the speculation he isn't devastated that a move to Chelsea didn't ever materialise.

The 21-year-old was the subject of keen interest from Tottenham Hotspur and two separate offers from Chelsea of more than £40m but the Blues stuck to their valuation of their homegrown talent which was reported to be at least £50m.

Nothing came of reports that the London club would return with a £60m bid before the 1st September transfer deadline and Gordon remained an Everton player, part of a squad that his now looking up the table rather than nervously over their shoulder for the time being.

“That’s part and parcel of football,” Gordon said of the intense transfer talk that surrounding him in the final couple of weeks of the summer transfer window. “When you’re doing well there’s always going to be speculation but the place is so good that it’s never been a case of being desperate to leave Everton.


“We’re in a completely different place to last year. It’s class, the morale is unbelievable and I couldn’t speak highly enough of it. We’ve made really good signings, people and players. There’s just a feel-good around the place.

“I like playing with pressure. I feel I thrive on it. If I want to be a top player, I have to do that regardless. I feel I’ve handled it well but I can still score more goals and stuff.”

Gordon is also hopeful that his fine form for England U21s will get him noticed by the manager of the senior squad, Gareth Southgate. The winger created two goals for Lee Carsley's side over the international break.

"To get there, I’ll need to score a lot of goals in the next couple of games. I’m ready for that challenge. I’m hopeful.”

Quotes sourced from The Athletic


Brian Murray
1 Posted 29/09/2022 at 23:41:43
Make a name for yourself this weekend never mind England. Coyb
Graeme Beresford
2 Posted 30/09/2022 at 08:34:58
Yeah I’m all for this, someone having a goal. If he wants to make the World Cup squad though it’s not just about goals, players like Saka have shown that, but he needs to be more involved in the game, he was none existent against West Ham. He needs to get busy.
Ben King
3 Posted 30/09/2022 at 08:40:21
He could easily be an effective wild card at the World Cup
Brian Murray
4 Posted 30/09/2022 at 09:17:06
Ben. How about him being a surprise wild card at goodison first and pull some trees up here. He seems to like away games more on the break etc so here’s hoping. As for England who really gives a flying although I’m sure it’s part of his ambition.
Will Mabon
5 Posted 30/09/2022 at 13:39:59
Don't know if it's a function of the interview and article process, but he's quoted as "Not desperate" to leave. Doesn't flatly say he didn't want to leave.
Stu Darlington
6 Posted 01/10/2022 at 09:17:55
I don’t believe Gordon wanted to leave at any time.
Surely a young footballers aim is to establish himself in his home clubs first team squad and then look to progress from there?
Gordon had only just got his foot in the door in this process at Everton, so why look to leave especially with his local roots and love for the club?
I think the driving force was greedy agents and the usual media suspects,something I’m afraid he is going to have to learn to deal with as his career progresses.
To me he has great potential but is still work in progress,
His finishing,work rate ( fitness? ) and as recently displayed,temperament, should all have been identified and being worked on by coaching staff at Finch Farm and maybe then he could begin to think of England selection and big money moves.

Nick Strong
7 Posted 06/10/2022 at 20:59:42
He's saying how happy he is playing for Everton this season, but why hasn't he signed the contract that's supposedly been offered.