Diamonds Are For Everton - The Story of Umbro and Everton

The Story of Umbro and Everton

Nestled in the heart of Cheshire’s “Golden Triangle” of Wilmslow, Knutsford and Prestbury – residence of many North West footballers – lies the village of Mobberley. Within the Bulls Head, recently reborn as a gastro-pub, can be found a display commemorating the birth of one of football’s enduring brands. It was here, in his parent’s pub, that Harold Charles Humphreys founded the business that would come to be known as Umbro.

With its links to the textiles trade, the Manchester region already dominated the fledgling sportswear industry through Stockport’s Messrs Bucks. It was whilst working as a travelling salesman for the company, eventually better known as Bukta, that Harold had an insight into the clothing and sports supplies business. In 1922 he started his own cottage industry out of a cupboard at the Bulls Head – importing clothing items from Manchester for resale to neighbours – this trade soon focussed on sports supplies for the moneyed Cheshire-set.

By 1924, 22 year-old Harold took the plunge and, with brother Wallace, formed Humphreys Brothers Ltd. (abbreviated to Umbro) on Green Lane in Wilmslow. The company soon outgrew this facility and relocated to large premises a short distance away on Water Lane – this would become the company’s administrative and manufacturing base for nearly the next 80 years. A logo was chosen consisting of Umbro lettering within a diamond – this has evolved into the double-diamond we are familiar with now. 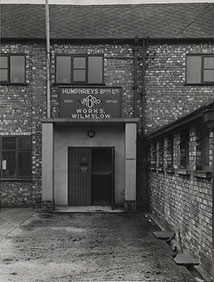 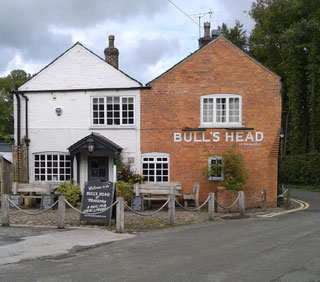 I have fond memories of, as I child in the 1970s, visiting the independent sports shop, run by former Stockport County player Billy McGann, just across the road from Umbro’s factory. Umbro passed on their “seconds” to McGann for resale from his bargain box – it was from here that my first Everton shirt was purchased. 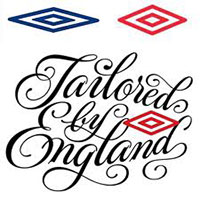 Umbro’s breakthrough on the national stage came through supplying the kits for Manchester City and Portsmouth in the 1934 FA Cup Final. Soon Umbro was rivalling Bukta for dominance in the British kit market. Perhaps its finest hour was the 1966 World Cup Finals when a spate of visits by Harold to football federations resulted in every team, bar Russia, donning Umbro kit. Umbro could rightfully claim to be “The Choice of Champions”.

Everton had tended get their kit, sometimes Bukta-made, supplied via Jack Sharp Sports until Umbro came on the scene just in time for the championship success of 1962/63. The average supporter would have been oblivious to the fact that the shirts worn by Young, Kendall Harvey, Ball and Royle were Umbro-made as no exterior branding appeared until 1974/75 (incidentally, in the 1972/73 and 1974/74 seasons, in which a collar and in-filled white v-neck were featured for the first time, Everton were supplied by Bukta).

Up until the 1970s Umbro and Bukta were virtually unchallenged in the UK. Puma focussed on the boot supply market whilst Adidas, through a distribution agreement with Umbro, focussed on the boot market. Adidas started to lobby for some kit supply deals. Umbro offered them some scraps whilst trying to retain the plum contracts such as Liverpool, Everton and Arsenal. This approach sometimes backfired on Umbro as Nottingham Forest and Ipswich enjoyed considerable success wearing the three stripes. The greatest threat to the status quo in this era was Admiral who snatched the England contract in 1974 as well as supply deals with Manchester United, Spurs, Leicester, Coventry and Leeds.

Spurred into action by Admiral’s overt branding style, Umbro unveiled their classic design template in 1976 featuring a prominent logo on the chest and the diamond pattern down each sleeve. With some tweaks to the diamonds, badge and shirt material this remained the Everton shirt design for six years. Only in the 1982/83 season was there a radical overall when a silky shirt with v-neck was adopted. In this period replica kit sales, primarily aimed at children, took off, with Umbro offering boxed sets of shirts, shorts and socks. 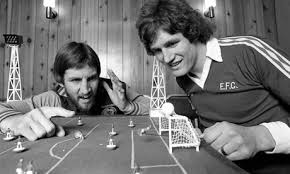 Perhaps there was an element of complacency in Wilmslow, as the 1970s ended, that the more conservative clubs, like Everton, would remain loyal to Umbro. It came as a shock when Le Coq Sportif exploded onto the English scene at the turn of the 1980s – Aston Villa and Spurs were amongst those to grab almost instant glory wearing the cockerel logo. Cheshire-based Le Coq Sportif UK, actually an off-shoot of the Adidas empire, was able to persuade Everton into coming on board for the 1983-84 season.

Umbro came under further threat in spite of the bankruptcy of Admiral in 1982. The break-up of the supply deal with Adidas in 1985 resulting in the German company securing kit supply deals with Liverpool and Arsenal to add to the one already held with Manchester United. By now Umbro itself had seen many changes – Harold Humprhies had passed away in 1975 and his son, John, who had had taken on management of the business, died only five years later. This left the company shell-shocked and rudderless. It was purchased by its US distributor and moved its premises from Wilmslow to Wythenshawe – by the mid-1990s production had switched to the Far East.

Everton’s flirtation with le Coq was curtailed after three highly successful years as the supplier was absorbed into the core Adidas operation and effectively withdrew from the UK football scene. Umbro seized the opportunity to return to Goodison with a classy, but contemporary, V- necked shirt with a diamond shadow effect on the fabric. It was accompanied by characteristically tight white shorts with a blue sash and blue socks.

Inconceivable as it might seem today, this kit was worn for three consecutive seasons – starting to look decidedly faded by the 1988/89 season. For the Merseyside cup final in May 1989 a new kit was unveiled which featured more intricate shirt patterning and a button-up white collar. 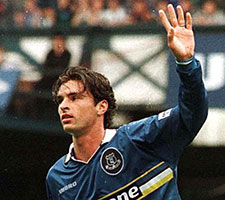 The following two kits were uninspired derivatives of the 1989 vintage, retaining the white collar but offering little in the way of inspiration – reflective, perhaps, on on-field performance as the team flirted with relegation. A much classier effort was released for the 1995 Cup Final – harking back to the 1930s with its black collar and sock trim. Away kits tended to go more “off-piste” with the tractor tread pattern and salmon pink/blue away shirt gaining notoriety.

By the mid-90s a new threat loomed on the horizon – after a decade focussing boot supply, American giant Nike entered the fray in the kit market with Arsenal being the launch partner. Umbro failed to raise the bar and what followed at Goodison in 1997 was a design travesty. With Everton in turmoil as Peter Johnson scrabbled around for a new manager to replace Joe Royle, Umbro delivered a shirt that echoed the sense of desperation engulfing the club. Poorly tailored with cheap-feeling, faded blue, material , the shirt had an in-filled V- neck that several players ripped out to improve comfort. Further embarrassment came when it was discovered that the yellow/white bands on the chest (by the One to One sponsors logo) had been placed upside-down on the replica production models. 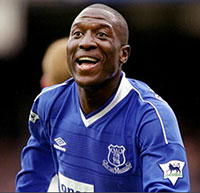 Perhaps stung by the criticism, Umbro went back to the drawing board and responded two years later with a much improved home offering worn by the likes of Kevin Campbell and John Collins. Back was the traditional royal blue and gone were the cluttered features. Perhaps the only talking point was the unusual “Star Trek” collar. After only a season in this kit, Everton moved to Puma, who were now trying to get a footing in the UK market.

With Everton at a nadir, narrowly avoiding relegation in 2004, missing out on Kings dock, struggling with debt and selling Wayne Rooney, Umbro returned once again. The simple outfit heralded Everton’s best season in nearly a decade as a Cahill-inspired team grabbed fourth place. Kits in the subsequent seasons (now changed on an annual basis) became more formulaic - following the Umbro template worn by other teams. After the FA Cup final defeat of 2009, the Blues once more waved farewell to Umbro and “bienvenue” to Le Coq Sportif (Le Coq now operated through a UK licensee linked to the Pentland Group – owners of JD Sports and Mitre). Ironically just as Everton left Umbro the manufacturer got its act together . Now owned by its rival Nike, the Manchester-based company looked to the past for inspiration and launched the Tailored By Umbro range – with clean lines, innovation and a sense of heritage.

Despite the positive reaction to the range, Nike decided to cut its losses on Umbro in 2012, selling the brand to the US-based Iconix group – transferring the plum contracts such as England and Manchester City before the deal was completed. The future seemed bleak when, for the first time in memory, no British league teams wore the double-diamond logo in the 2013/14 season – only Stockport County, wallowing in the Conference North flew the Umbro flag. However in other parts of the world, particularly South America, Umbro was continuing to “tailor” impressive kits. Closer to home, the Irish national team remained loyal to Umbro.

In the Autumn of 2013, into the second season of a three-year deal with Nike, via Kitbag, Everton were considering their kit supply options. Whilst Everton were a small fish in a large pond for Nike, Umbro, desperate for a top-flight relaunch partner, could promise close collaboration. The 5-year tie-up was announced in inspired fashion with a mystery tour to Umbro’s Manchester HQ for some hand-picked Everton supporters. Hull and Derby County were also signed up in the subsequent months. 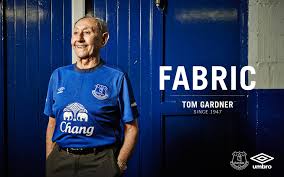 The 2014/15 kit was unveiled in June 2015 with the tagline “Fabric of Everton” – emphasising the longevity of the relationship – albeit with some breaks – between Humphrey Bros. and Everton. Despite reservations in some quarters about the use of navy trim the home kit is sleek, uncluttered and respectful of the club’s heritage.