Around 1977, I realized that Evertonians had become my family – not just my match-going pals but the nameless folk with whom I shared a collective intake of breath during the opening bars of ‘Z Cars’. Like most of them, my hero was Bob Latchford.

I had admired him on hundreds of occasions. But most vividly, I can recall the last time I saw Big Bob in action. The venue was the Baseball Ground. The timing was three days after we had conceded the League Cup final second replay to Aston Villa at Old Trafford. David and I thought that the game at Derby would provide an opportunity to display our steadfast loyalty before we started our new lives in the USA later that summer.

While I joined the rain-soaked queue at the turnstiles, my husband disappeared. He returned with tickets for the seated accommodation – a rare treat back then. I was thrilled that we would bid farewell to Big Bob and his team-mates in comfort. Or so I thought. I recall that there was a massive turn out of Blues; however, none were in Derby’s grandstand. The locals around us appeared irritated by our presence. Given their belligerent mood, we stifled our enthusiasm as the Rams dominated the early proceedings. Then it happened – Bob Latchford scored. In a flash David was out his seat screaming his head off. A split-second or so later, I mirrored his behaviour. This incident sticks in my mind because the goal was disallowed and my husband was back in the anonymity of his seat while I continued to jump up and down amid a torrent of intimidation from all directions. Like a naive soul, it took me another second to comprehend that the abuse was aimed directly at me.

Some advised: ‘Sit down me old duck!’ Others yelled: ‘Shut your ugly gob!’ before adding references to parts of the female anatomy. Embarrassed, I smiled at my neighbours and was in the process of retaking my seat when someone screamed: ‘That Latchford is a lazy lummox!’ I believe that there are times in life when you must defend the honour of your family. And this was mine. Still standing, I responded: ‘Excuse me; I think you’ll soon discover that Bob Latchford is no lummox.’ Then I responded to a menacing individual several rows behind him: ‘Sir, Bob is deceptively mobile. Surely, you’re aware of his magnificent muscular legs!’ As my words reverberated around the grandstand, the Derby fans around us moved to safer seats.

As you may recall, following Everton during the Seventies was an incredible adventure of disappointment and elation, often in the space of 90 minutes. Trailing 2-0 at half-time, we refocused and led 3-2 thanks to goals from Big Bob, Mike Pejic and Little Dunc before my hero was injured. I remained seated while Big Bob was carried off but remember celebrating McKenzie’s winner with the wild enthusiasm of someone who would never ever visit Derby again. 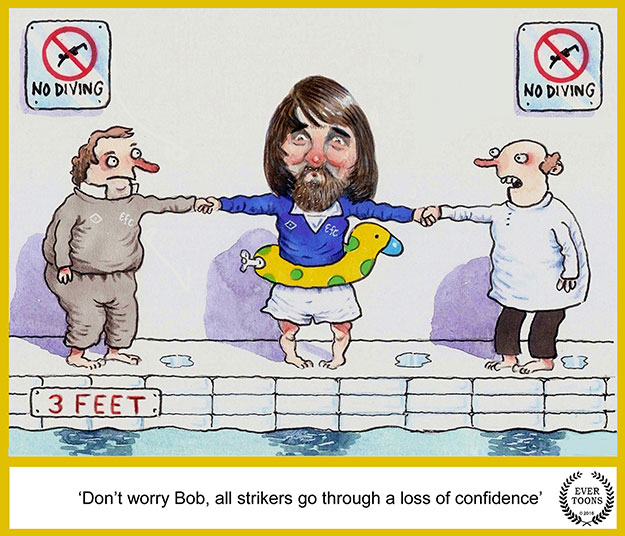 So how good was my hero? Blues who profess to know more about these things claim that he could head the ball like Dixie Dean, shoot like Tommy Lawton and walk on water like Alex Young (although they concede that Bob created some ripples). Most of his goals were scored from inside the box with little fuss. Many with his head and his feet, others via his knees, back, bum and, I seem to recall, his beard. Given that he wasn’t a flashy footballer with a signature goal celebration nor did he wear florescent boots and matching gloves, collapse to the turf at a mere whiff of a defender’s bad breath and struggle to comply with the basics of the Offside Law, what made him so extra-special? In simple terms, Bob had ‘The Knack’. Intuitively, he knew when to be at the right place at the right time in the penalty box to receive crosses from the likes of Dave Thomas, John Connolly, Gary Jones as well as youngsters like Ronny Goodlass and George Telfer. Yes, Big Bob was a proper No 9. 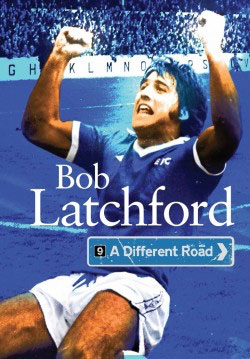 Bob's autobiography is officially launched this week by deCoubertin Books.

Even though he won zilch, my hero deserves his place among the pantheon of true Everton stars alongside title-winners – Joe Royle, Graeme Sharp and Tommy Lawton – but some way below the exalted Goodison Gods of Dean and Young. Old timers claim that his goal-scoring skills resembled those of young Tommy Lawton. Rich praise indeed. Certainly like the pre-war star, Bob Latchford left Goodison too early with too many goals still in his boots.

Of course, Big Bob and his team-mates were unlucky not to capture a trophy or two or perhaps even three. Ill-fated in the League – how else can you explain the 1975 run-in when we collected only 3 points in the final 10 games? A stretch that included losses at home to Carlisle (who finished bottom), Luton (next to bottom) and a draw at Chelsea (also relegated). Unfortunate in the cups – how else can you explain Villa stopper Chris Nicholl’s fluke from 40 yards out? Or the cruel assault on the outrageously gifted John Connolly by non-League cloggers from Altrincham? Or indeed, the timing of Big Bob’s own injury at Derby which resulted in his absence from the semi-final clashes with Liverpool and that arrogant little man from Treorchy?

Despite his lack of gold medals, Bob was my hero – a proper hero with magnificent muscular legs that could walk on water.