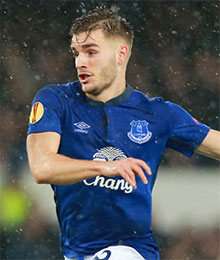 Luke Garbutt has been given another loan assignment, this time a four-and-a-half month spell at Wigan Athletic.

The 23-year-old has joined the Latics until 2nd January.

Garbutt broke into Everton's first team during the 2014-15 season where he deputised well for the injured Leighton Baines and Bryan Oviedo but found it difficult to negotiate his way back into the side once the former was fit again.

He spent most of last season on loan at Fulham, making 26 appearances but generally struggling for form by most accounts from observers of the London side in a season disrupted by injuries.

"We've been hit with injuries to Reece James and Andy Kellett and it was clear we needed someone in," Wigan manager boss Gary Caldwell said on Wigan's official website.

"Luke is a tremendous young player with a big future in the game and we are delighted to have reached an agreement to bring him here."

The loan is till January 2nd.
I think he will be sold in that transfer window.

Take our most recent signing, he was at Bristol City 4 years ago. Jamie Vardy, Wes Morgan a few others.

Baines has just had new contract, so I think that spells the end for Garbutt at Everton – I think he'll play in the Premier League, though.

How long should a club wait before deciding a player is never going to get into the 1st team?

This is the problem with academies. Everton's has produced two real top players in Rooney and Barkley. The only problem is they are 12 years apart. So we should expect our next young superstar around about 2025. How do we produce good young players regularly? Instead of just keeping them hanging around in the various youth teams hoping that they will miraculously get better until we finally realise they won't and start loaning them out.

Anthony Jones
10 Posted 16/08/2016 at 20:03:51
Seen him play well for us. More promise than Oviedo, and he is getting a bit old to be loaned out.
Tony Steele
11 Posted 16/08/2016 at 20:14:06
Either he's been given assurances he's Baines's successor or he's keeping himself ready for a transfer. I'd be wanting to assert myself in a first team now if I were Garbutt. I hope we don't live to regret letting him go if he does decide to leave for good.
Peter McCann
12 Posted 16/08/2016 at 20:17:03
Good player but then controversy over his contract distracted him and he needs a god season under his belt. There is still time but it's down to his attitude and application as there will be an opening for him.
Jim Hardin
13 Posted 16/08/2016 at 20:22:53
I don't think it is the end for him at Everton just by virtue of being loaned out. I think it is his last chance though since the loan ends at the beginning of the January window. If he doesn't impress enough at Wigan to merit making the senior squad, then he can be sold. This is a chance for him to get fit and get game experience while proving he is not injury prone. He wouldn't get that at Everton as he is at least third on the depth chart.

As for being better than Oviedo, nope, nope, and nope. He is not even as good as, much less, better than, our Tico. However, if Oviedo cannot stay healthy, then the short-term loan gives Everton a hopefully match-fit player to step right in to that #2 spot for the second half of the season.

Bobby preferred an untried Galloway to him at the end of 2014-15 (when Garbutt's contract was about to finish) and Koeman doesn't seem inclined to play him any time soon so neither Fulham nor Everton are seeing what they want from him. I think he has had his chance and he needs to move on.

Being first in and last out of training at Wigan and setting the standard would be a good start.

Jeff Armstrong
18 Posted 16/08/2016 at 21:21:32
Hope we insert a future percentage clause if we do sell him to a Championship club for example. If he does come good and ends up back in the Premier League, then it's first refusal AND a percentage deal for us.
Ian Burns
19 Posted 16/08/2016 at 21:21:41
Frank and Colin - I hesitate to disagree with two whose posts I have a great deal of respect for but I do pray you have misread the situation because I would like to think Luke has a future with us as he is a natural left back with a tremendous left peg.

Frank given we have Davies; Dowell; Kenny et al I would be hugely disappointed if it was 2025 before we saw the next Rooney/Barkley!

Lev Vellene
20 Posted 16/08/2016 at 21:26:15
I hope the message RK is sending here is that he has potential, but he needs playing experience to bring it up to GP levels. If there is no vacancy for him to fill right now, and RK saw it early (so no squad number given), then I can only hope he'll bully his way back home by doing great on loan.

Question is how do we develop amazing skill and confidence at junior and youth level ,

Check out my Sport4kids.biz model it hs some promise ... but not for Everton

We at EFC needs skill based training from 15 to 18 - what we do is put them into teams and hope they develop . as Frank said ... it is crucial that we chang ethe way we train the teenagers ...

Those talking about players making it in their late 20s... I think that rarely applies to full backs. Centre halves and strikers yes. At 23, he should be knocking on the door or in the berth. Sadly he's not been.

No way, people. Jim, John, Frank and Colin have it right. He may have a "tremendous left peg" but he can't play at this level. What I saw of him for us did not impress me at all, and he was a complete bust in his 25 appearances at Fulham. In February he had to be subbed out at 34 minutes against Blackburn. He tweeted an apology to the fans for his performance.

Seems like a class young man, and I wish him the very best at Wigan and wherever he winds up playing permanently. It won't be for us.

Last season he made us wait on a contract, then demanded a loan deal, maybe he made demands to RK and he did not like it.

Hopefully this is a lesson he needs, then he kicks on.

Lev Vellene
29 Posted 16/08/2016 at 23:10:56
Let's give him a year on loan, let him prove us all wrong! What better hope is there? I hope he ends up blasting my in-bred EFC complacency to smithereens! :P
Richard Dodd
30 Posted 16/08/2016 at 00:01:42
Posted this news last week when Luke wasn't given a squad number in spite of having four years to run on his contract. I imagine the same fate awaits nearly all the other 'graduates' of the Club's system. The odd first team appearance in an emergency then obscurity.

I guess we'd all rather have Everton spend Mosh's millions than rely on kids. Academies serve only to give old players employment!

The lack of a squad number doesn't exactly scream confidence. Koeman, for whatever reason, clearly doesn't fancy him. All we can hope for is a very good 4 or 5 months that entices teams to pay a few million.

I like Baines, don't get me wrong, but don't think he has ever been the same player since the links with Man Utd, when he eventually committed to us. He never seems to want to get to the by-line anymore, or even get near it. His defending is good, but as an attacking LB he has definitely lost something.

Remembering also, that he is into his thirties now, and won't be able to go on forever. So maybe, just maybe, Luke Garbutt could be the answer for the future!

You've just decided that none of our kids will make it through under RK, with your logic being based on the fact some of our better kids are getting a chance at genuine first team football at Championship level.

Galloway playing regular at Newcastle, Garbut getting another chance to impress after a poor loan spell out at Fulham, Griffiths being allowed to develop elsewhere, Connor Grant at Ipswich, all of this is valuable experience and essential for players development, do you remember what happened with Shamus Coleman.

Mike Allen
36 Posted 17/08/2016 at 10:53:07
Another player allowed to go to seed under the last manager; never given a chance, along with a few others he fell out with. Mind, I believe Jones was the one who ratted on the players.
Richard Dodd
37 Posted 17/08/2016 at 10:55:06
Well, Anthony, we got money for Rodwell and Anichebe and Barkley is world class to some, so, perhaps, three successes since Rooney is a healthy return?

On the other hand, the money we made on Lescott and Stones, who we picked up for buttons, makes a case for using the Championship as our nursery.

Dave Abrahams
38 Posted 17/08/2016 at 11:56:33
Frank (9) you make a good point; however, quite a lot of money was made on Jeffers, Ball, Dunne and Rodwell, plus money was made on Duffy, Long and other players who didn't make it at Everton. These players make the cost of running The Academy worthwhile.

There are two or three young players coming through now who have a good chance of being more than useful playing for the first team – would you bet against Tom Davies, for instance?

Get his head down and get noticed in the Wigan side.

That's the only way he'll get back into the fold.

Baines is still good but I think his days of potency down the left are gone and he now reminds me of Mike Pejic who took up some very interesting positions almost in centre midfield rather than charge down the wing.

If Luke does well then RK will likely give him a chance- if he doesn't then he will be gone- this must be his last chance.

I think Oviedo has looked much sharper this pre season and it would be great to get him back to his best. Galloway will hopefully progress if he goes on loan. Left back is well catered for whilst right back has no quality cover at all although a few can fill in which is not good enough when we have aspirations for top 4.