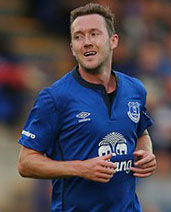 Everton look to have agreed a deal with Sunderland for the sale of Aiden McGeady, ending the player's 3½-year association with the club.

The Irish international spent the bulk of 2016-17 on loan at Preston North End and was named the Lilywhites' player of the season under manager Simon Grayson.

Grayson's move to Sunderland from Deepdale last month raised the prospect of McGeady following him to the Stadium of Light rather than staying with Preston and that appears to be the situation if a BBC Merseyside report is correct.

Reports over the weekend suggested that the Blues had agreed a £4.5m deal with the Black Cats but this has yet to be confirmed.

Good business for Everton if the price is accurate.

Was excited when he signed just not fit enough for the PL.

I wish him the best. But ultimately he was a dreadful signing.

I think he is better suited to Championship level. Good luck to him. He's a nice guy who had it tough in Scotland after signing up with country of his father's birth. Just didn't have what it takes to play at PL level.

Not until I've seen him wearing the Sunderland kit officially!

Then, I will, because I will know there's no chance of him coming back!

Des Farren
19 Posted 04/07/2017 at 19:35:51
Good luck Aiden. If you happen upon this thread, no doubt you can ignore the miserable comments that seem to be part and parcel of every player's departure from this club. Enjoy the rest of your life.
James Morgan
20 Posted 04/07/2017 at 19:56:56
A waste of money but wish the lad well. I'd be interested to see a full list of all players sold and released and their transfer fees and wages in the Moshiri era. I cant be bothered looking it all up so if someone could please oblige. Thanks.
Chris James
21 Posted 04/07/2017 at 19:58:29
How many ex-Toffees does that make at Sunderland now then?
McGeady
Rodwell
Pienaar
Anichebe
Gibson
Oviedo
Plus: Galloway and Browning apparently lined up for season long loans!
Just 3 more for a full side!
Brian Wilkinson
22 Posted 04/07/2017 at 20:06:50
They may snap up Niasse as well Chris.

This sale is part of the excellent business that has been carried out so far. Long may it continue.

Teddy Bertin
24 Posted 04/07/2017 at 20:07:34
Talented as a youngster but never cut it at this level. Should never have gone to Russia, probably a decision that stopped him fulfilling his potential.
Glimpses of a great footballer so I hope he does well at Sunderland. My PNE mate's absolutely love him.

Can't believe we've got that sort of money for him. Just shows that if there is talent there then it's well worth sending a player out on loan to get their fee up. Many Evertonians demanding that he be struck off the books to save the wages but another good decision from the club.

Can't believe my eyes and ears at the moment. Everton FC seems to have money, be attracting top players and most astonishingly are being run really well.

Andrew Ellams
25 Posted 04/07/2017 at 20:08:01
Chris, Anichebe has just moved to a club in China but Sunderland are starting to look like Oldham did in the 90s.
Martin Reppion
26 Posted 04/07/2017 at 20:11:59
Sadly he never looked good enough for us or even a lesser top flight team. I hope he does well for our cast off XI in the north east. I like to see Sunderland do well, if only because it annoys the noisy lot north of the Tyne who are having one of their bounce up years.
Michael Sopt
27 Posted 04/07/2017 at 21:01:31
I wish him well. I don't recall him complaining about a lack of playing time and his last loan club loved him. And I still remember his cracking goal against Leicester that was perfect. Good luck Aiden
Andrew James
28 Posted 04/07/2017 at 21:58:22
For me, this was the first time alarm bells started ringing about Martinez when we brought McGeady in his first season.

There had been a lot of Wigan signings up until then but the overall form and style of football had made me think he knew what he was doing. Then McGeady came - a stubborn and self indulgent Martinez signing - and within months it became clear there were some problems with what Martinez was trying to do as we had the surrender in the FA Cup, the fiasco at Southampton and the usual humiliation over the road.

That was over 3 years ago and we're still clearing up the mess! I'm just trying to count how many Martinez signings are still left...

Graham Coldron
29 Posted 04/07/2017 at 21:59:38
I'm a season ticket holder who lives in the north east ( Blyth home of Blyth Spartans) and the animosity between the barcodes and sunderland goes well beyond footie and is akin to manchester and liverpool in many ways.I'm rambling a bit as I'm in Spain on holiday but all this transfer stuff has made a great holiday even better night all club!😀
Matthew Salem
30 Posted 04/07/2017 at 22:03:45
I suppose you could add Lescott to that list , although I believe they relieased him again
David Currie
31 Posted 04/07/2017 at 22:06:36
Good move and we get 4.5 million, he was utter shite and along with Alcatraz the two worst signings of the Martinez era.
Dave Abrahams
32 Posted 04/07/2017 at 22:12:31
I can't believe what is happening to Sunderland, a once great club with fabulous supporters, 'The Roker Roar', louder than the Kop and that is with no roof on, those supporters are much more discerning than Newcastle fans who would chear on eleven monkeys with black and white stripes on.

I hope the club rises from the mess they find themselves in now, it will be a long haul but those fans deserve much better than the way the club as been run the last few years and I hope that they get someone cares enough to sort the whole place out, how did the club disintegrate like this. I sincerley wish them well in the future.

Loko Sanchez
44 Posted 05/07/2017 at 04:50:27
It is just unfortunate that it didn't work out for him at Everton. As a proud fan of the classiest club in England, I wish him all the best at Sunderland.
Mark Andersson
45 Posted 05/07/2017 at 05:55:39
Post of the day Dave Abrahams.. Good luck to the lad I say. Every player that comes to Everton I sincerely hope they do well. When they leave I wish them well. That should be the Everton way, not the snide remarks and good riddance attitude.
Darryl Ritchie
46 Posted 05/07/2017 at 06:54:52
Not good enough for the Premier League, however, he seems to have found his level in the Championship. He should do well at Sunderland, because, unfortunately, I think they're going to be down for a while.
Thomas Surgenor
47 Posted 05/07/2017 at 07:26:38
So who's left from Martinez?
Robles, lukaku, besic and Barry?

Yet we still have Mirallas, Coleman, Baines and Jags from the Moyes years.

Jer Kiernan
49 Posted 05/07/2017 at 09:05:35
Best of luck to him. One of the most frustrating players I ever watched in both the Blue of Everton and Green of Ireland. He no doubt has a talent but just could not apply it to his chosen trade.

A bit like a sprinter who can do the 100 meters in 6 seconds but can only do it running sideways!!

Farewell to McGeady, in the final analysis he played for Everton and I can't recall any nonsense off the pitch so why not just wish him the best. Like other players not really good enough like Mark Pembridge, Tony Thomas and Mitch Ward (best crosser of the ball btw) he won't exactly be missed but there is hardly need for animosity, afterall we the club chose to employ them.

I reserve my meanness for those who leave in disrespectful circumstances, like Barmby and soon to be Lukaku, despite their better contributions to the club.

Sunderland are complete mugs. Hiw much crap have they bought of us now? 🤣

A Scottish Irishman
Or
Irish Scot.
Some think it
Important but
I do not.

You played for us and
In Scotland then
Moscow.
You're going to
A new club
Now
But like some others
I am not
Sure how

Football is full of con men who are at a club for the contract, without giving anything back to fans or employers or having any respect for the club at all. McGeady is one of those players who not only don't put the effort in, but actually have the appearance of not giving a toss.

For your information, I wish Ill to no man, whatever they have or don't have.

"If you can give a decent performance 7 times in the next 10 years, it will give you 15-year career at say £1 million a year, what do you think, Aiden?"