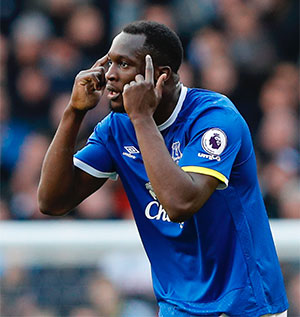 Updated Manchester United have stepped in front of Chelsea in the quest to sign Romelu Lukaku amid reports they have had a bid accepted by Everton for the Belgian.

The BBC led with claims this afternoon that the Red Devils' have agreed a fee of £75m for Lukaku who has made no secret of his desire for Champions League football, something which United can now deliver despite the fact they only finished one place above the Blues last season.

Triumph in the Europa League in May handed Jose Mourinho's side a route into the Continent's elite competition and it could be enough to give Lukaku what he wants provided the striker is agreeable and Chelsea do not step in with a higher offer.

While there were reports that the Everton hierarchy had denied that a deal had been struck with United, multiple media sources are claiming tonight that Lukaku is set to undergo a medical in Los Angeles in anticipation of completing a transfer to Old Trafford where he will earn £200,000 a week.

Chelsea sources maintain that the London club are in the mix but could be hamstrung by the fact that Diego Costa's proposed move back to Atletico Madrid has yet to come to fruition.

The £75m fee United are said to be offering would be significantly lower than the £100m that Everton were reportedly holding out for for Lukaku but the deal is said to involve £15m in appearance-related add-ons and an agreement to waive Wayne Rooney's £10m market valuation.

Rooney is believed to be very close to securing a return to his boyhood club in a move that will see his reported £250,000-a-week salary cut in half.