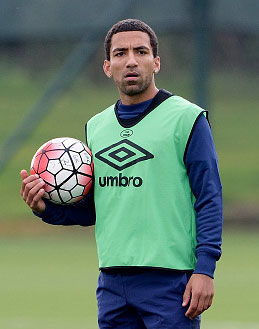 Aaron Lennon has expressed his gratitude for the support he has received from his family, Everton and the football world as a whole during what was a difficult period for him earlier this year.

The winger was detained under section 36 of the Mental Health Act in May and underwent treatment at The Priory in Darlington and Altrincham and also the Salford Royal Hospital but is back among his team-mates and looking ahead to the new season.

Lennon will be hoping to force his way back into the first-team reckoning at Goodison Park this coming season after making just eight starts in all competitions under Ronald Koeman last term.

Yannick Bolasie's injury and Gerard Deulofeu's departure for Barcelona have removed two obstacles standing in his way and he says he is "ready to kick on."

“It's great to be back after a difficult period," the 30-year-old said of his return to training for pre-season. "I've had a good first week of training and I can't wait to kick on now.

“The support I've had from Everton, Spurs, their fans, football fans and concerned members of the general public has been incredible.

“It's important to emphasise that there is amazing help out there and anyone feeling anything out of the ordinary should seek support because it is great and good to talk.

“Lastly, a special thanks to the staff at Everton, my team-mates, and especially my family and the people around me.”


Tracy Shearer
1 Posted 11/07/2017 at 06:37:18
Welcome back Aaron! I really enjoy watching you play. Your pace, enthusiasm and hard work are inspiring. Nothing wrong with getting some help. Thanks for reaching out and encouraging others to do the same.

Looking forward to seeing you on the pitch very soon.
Best of luck!

Peter Lee
2 Posted 11/07/2017 at 06:50:30
He's never given less than his best and always played to orders. In a squad that generally lacked pace I could never understand why he was so little used.

His willingness to chase back gave Coleman more licence to go forward. Maybe his illness was part of the problem.

Whoever we sign he remains an option on the right from the bench and in cup games. Could be particularly useful in away legs in Europa League.

All the best, Aaron.

When you complete your comeback, there will be a welcome waiting for you at Goodison the likes of which you cannot imagine.

Darryl Ritchie
4 Posted 11/07/2017 at 07:16:29
I've always liked Lennon. Even at 30, he's one of the quickest players in the squad. With his illness behind him, maybe he can recapture a bit of his previous form, and become the two way, pressing right wing, with the devastating cross and occasional goal that Koeman has been searching for.

With the squad being so short of wingers, the opportunity for him to cement his spot is about as good as it will ever be.

I'm pulling for you, big guy.

In a sport of self-obsessed players, his plight makes us realise some of them are only human.

Good to see him back.

Said it before, but for me, he's a better bet against lesser sides where we have more of the ball than Holgate, as a right wing back.

Brian Porter
16 Posted 11/07/2017 at 09:53:34
Welcome back, Aaron Lennon. Hopefully, the publicity given to his illness will go some way towards changing some people's minds about the many and varied forms of mental illness.

When I was struck down by clinical depression some years ago, I could have slapped no end of people who said "What have you got to be unhappy about?" It seemed impossible to explain to them that depression isn't about being happy or unhappy, but is an illness that can strike anyone at any time.

I'm sure it was a situation Aaron found himself in more than once, especially when you consider his position as a highly paid professional footballer, doing something most people can only dream about.

Hopefully he is now free of whatever demons possessed his mind at the time and can go on to rebuild his life and career and enjoy some success and fulfilment now he's back in the fold with his friends and teammates. I have a suspicion that Koeman has been a strong support for Lennon during his absence. He has certainly always spoken in very positive and supportive terms about him since his illness was made public. I'd like to think so.

It would certainly be great to see him make his first appearance since his illness. Whether it's from the start or as a late sub, I'm sure he will be amazed at the warmth of the welcome he's likely to receive.

Maybe he can recover some of the earlier form seen when he was on loan here. He was a very good player at Spurs a time back. There can be a real role for him in this squad this season.

Alexander Murphy
22 Posted 11/07/2017 at 15:33:21
Glad that you are fit and well again, Aaron.
Kevin O'Regan
23 Posted 11/07/2017 at 17:45:10
Support through thick and thin is what fans and family are all about. Let's remember that, whatever crazy amounts of money is being thrown around in football these days, it doesn't mean these guys are immune to the kind of pain or suffering which can hit anyone. You can see with this and young Bradley and EitC that EFC is a special family. Well done.
Paul A Smith
24 Posted 11/07/2017 at 17:53:51
It's great to see near any man find his way back after hard times. Credit to Aaron Lennon and all those involved in his recuperation, including a large number of concerned and supportive Evertonians.
Brent Stephens
25 Posted 11/07/2017 at 18:03:30
It couldn't have been easy for him to step back into Finch Farm. The male culture, and maybe football more so (?), hasn't always been a particularly understanding environment.

Well done, lad. Would love to see a few cameo appearances from him in the League Cup and in Europe.

Dermot Byrne
26 Posted 11/07/2017 at 18:10:36
Agree Brent. Overall this, the abuse cases where people spoke and others with alcohol, drug and gambling problems getting help, these may be steps whereby the culture changes. And if the "stars" tell the truth and get help and are supported, it may trickle down to grassroots too and kids looking at their heroes.

Give it a week and Theresa May will ban all this!

Many a true word... ,"Give it a week and Theresa May will ban all this!"

Anyway, Niasse has a number. It appears to be the maximum number of goals he is likely to score if he stays with us and plays every game until 2023...

Come on, he is a nice guy. But he is not a 'guy'. But if he he proved to be 'one of those guys' well I will eat my cheesecake. But only if I have frozen it and defrosted it over a 24-hour period within its given shelf-life. And I don't think that is going to happen.

True grit and belief and fighting spirit. Made up and here's to future hopes and success at EFC, this season.

As a Clinical Psychologist, I particularly liked this bit:

"It's important to emphasise that there is amazing help out there and anyone feeling anything out of the ordinary should seek support because it is great and good to talk."

As Freud said 'when someone speaks, it gets lighter.'

Peter Mills
35 Posted 11/07/2017 at 23:06:36
It's excellent to see Aaron back. I'm sure he has had the best of therapy, assistance and support, but the great effort can only have come from within himself.

I would love to see him play again, partly out of compassion and respect for him, but also because I think he is a decent footballer who could be very useful for us. The players we have signed this summer all have fight, leadership and the desire to win battles – in getting back to Finch Farm Aaron is demonstrating these qualities in his own way.

Brian Porter, in this and previous threads you have shared your own experience to shed light on mental health issues. Thank you for doing so.

You explained about depression so well I felt no need to add much really but the bit about peoples attitudes rang a bell. I had the same reactions, people telling me to cheer up or thinking just because my life was fine on the surface, I should be thankful cos lots of people are worse off...

Anyway I imagined a lot more people thought because hes a highly paid footballer, Aaron didn't deserve much sympathy... however it seems I was wrong & so many fans have empathy & understanding about his illness. I'm so glad he seems back on track.