Everton pick up Martina on a free 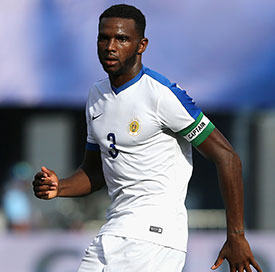 Everton have confirmed the signing of defender Cuco Martina whose Southampton contract expired this summer.

The 27-year-old, who was brought by Ronald Koeman to St Mary's Stadium, has signed a three-year deal with the Blues.

Able to play at right full back or centre-half, the Curaçao international will add depth and versatility to the back line as Everton look ahead to what they hope will be an extended European campaign alongside their domestic commitments.

“Cuco Martina is an experienced player who can perform in different positions at the back, which is important,” Koeman told evertonfc.com.

“It's also important, with the number of games we will face in the coming campaign, that we have strength and competition in the squad.

“I brought the player to Southampton, so I know what he can do for us here and this is why I've now brought him to Everton. He is a player who will strengthen our squad and be able to play in different positions when that's needed, too.”

Martina, who joined the first-team squad that flew to the Netherlands this week, started his career at Feyenoord and played in Holland under assistant manager Erwin Koeman at RKC Waalwijk before moving on the FC Twente.

He told the official site about how he excited he is to join a big club and how he hopes to help the Blues this season.

“Everton is a big club with big ambitions and I'm really looking forward to joining this group of players and the manager as we try to step forward next season,” Martina said.

“Obviously, I know the manager from my time at Southampton, so I know what he wants and he knows what I can do.

“Everton supporters are really passionate about their Club and everyone's excited about where the Club is aiming. You can see this is a club that wants to achieve something and the players we are bringing certainly show this.