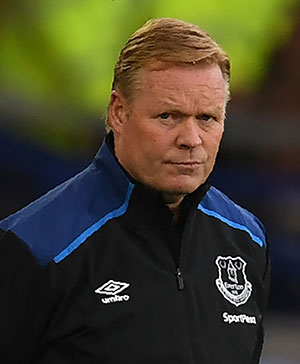 Ronald Koeman said he was happy with Everton's victory over Ružomberok in the Europa League qualifiers this evening, particularly given that his players are still some way short of being completely ready for the new season.

The Blues' entry into the Third Qualifying Round necessitated the earliest start to a competitive season in the club's history and it showed in a display that was pedestrian and lacking energy, at least until new signing Sandro Ramirez came off the bench to offer some pace and directness to the attack.

With Wayne Rooney making his first appearance since returning to Goodison Park, first in a central striking role and then as a more withdrawn right attacking midfielder, Everton eventually edged the Slovakian side 1-0 thanks to Leighton Baines's deflected 65th-minute strike.

“We know we are not at 100%. It's still the fourth week of the pre-season,” Koeman said when asked for his thoughts on the game. “We took it very seriously and we did everything to get a better result.

“1-0 is not a big result but it's a good result. Every clean sheet in the first game is a positive result.

“I think we had good pressing and a lot of ball possession. Maybe we [should have] created more open chances but I think we scored a good goal, we kept a clean sheet so there are a lot of positives tonight.

“I think it was a physical test for the players. Normally you don't play 90 minutes after only four weeks [of pre-season]. It was an important game, the boys did well, they tried for a better result and, finally, I'm happy with the result.”

While he probably wasn't signed with the intention of replacing Romelu Lukaku like for like, Sandro offered plenty of evidence that he could be one of the better close-season introductions to the Premier League and he helped spark the Blues into life when he was introduced with an hour gone.

“Sandro brought pace to the team and he had good movement that gave Wayne a little more freedom on the right side and that was good to see,” Koeman said. “After only 10 days of training, that's what he needs to [get] stronger and next week he's one more week [further] into training and it makes it easier.

Asked if he was still confident of progressing to the next phase, Koeman replied: “Yes, of course. It's normal. I don't expect much this far in pre-season; normally you need five, six weeks to be at your best.

“We have a lot of new faces and maybe that's also the reason why we need some time.

“But I'm happy with what I saw tonight. I'm happy with the commitment, the aggression, I think we had a lot of the ball, we tried to get it back really soon when we lost it so I'm happy.

When quizzed on new signings, the manager reiterated that the Gylfi Sigurdsson situation was in the board's hands while also saying that “we'd like to sign another striker up front. Normally we will have two number nines.”