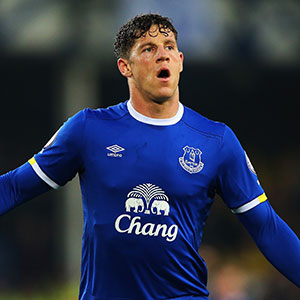 Ronald Koeman says that Ross Barkley will remain an Everton player, at least for now, as the midfielder makes his return from injury.

The 23-year-old missed pre-season after he required surgery to repair a groin injury but is back in training, along with James McCarthy, as the Blues prepare for the kick-off of the new Premier League season this weekend.

Barkley won't be involved but his manager admits that the player could now stay at Goodison Park despite Koeman's preference that he be sold this summer if he won't sign a new contract.

Barkley has been linked with Tottenham and Chelsea but there have been no formal offers for him thus far.

"Ross Barkley is back in training" Koeman said at his pre-match press conference this morning. "That is good news for him and good news for us.

"He has participated the last two training sessions but he lost a long period of pre-season. But I don't have any update.

"There is no offer on the table for Ross," continued the Dutchman who hasn't closed the door on Barkley leaving before the transfer window deadline if the right offer does come in. "That means he will stay at Everton now. What happens in the coming weeks, I don't know.

"If there is an offer, maybe the club will not accept. He is a really good player — a young player, an English player.

"'With all the valuations we have seen the last few weeks about players, then if you want to buy Ross, it is a big deal. I expected us to have offers on the table for Ross because he made the decision not to sign. At the moment, there is no interest.

"Ok, he will stay and be part of the team. And the best XI will start the game. I respect every personal ambition of every player but still he is ... training with Everton."