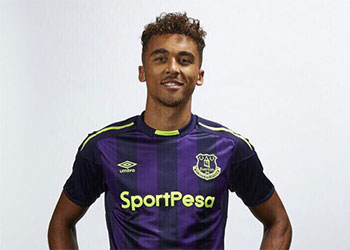 The club have unveiled the new third kit in a series of tweets by players today.

Squad members like Morgan Schneiderlin, Mason Holgate, Jonjoe Kenny and Dominic Calvert-Lewin all shared images of the strip on the social media platform.

The second change kit features dark navy and purple stripes, navy shorts and socks with the logos and trim in luminous yellow.

I really like this shirt – ooks smart and modern.

Third: No need for a third with an amber away kit.

Home shirt looks like a training shirt and, although white socks are thankfully present, this is the worst home kit for some time, probably only the monstrosity of 2000-2002 by Puma is worse.

Away kit is just crap, grey never works as a football kit colour. It might be the latest look in Kitchen unit doors and aluminium windows, but as a clothing item definitely not.

This is much better.

I used to quite like Umbro, but now I'm not sure. We've tried most kit manufacturers now and none has done a great job.

Like many others, the very simple commemorative kit appealed to me. Maybe I'm just getting old? Hahaha!

Under Armour make decent kits; I wonder if they would be better than Umbro?

Not a patch on my favourite though. Salmon pink and navy NEC!

As for this, yet another festering pile of steaming offal from the world's most pathetic kit designer.

Could we not just go back to the Alan Ball era style of minimalist, clean and simple design? That kit we wore against Sevilla looked more like what we should be wearing. Nicer badge too than what we normally use.

However, for Everton – James Barkley @ 8 says it all.

Surely enough designs and variation can be conceived to keep fleecing the kids for kits each year, whilst sticking within our core heritage.

Will Jones
19 Posted 11/08/2017 at 21:09:53
This is a really good design. The idea of a 3rd kit is to be different to the others, and this does, and still looks pretty trendy. I would be happy to buy one.
Kristian Boyce
21 Posted 11/08/2017 at 21:28:37
I was under the impression we were meant to be Umbro's flagship club, and that they used us to announce they were back in the kit making business. Hopefully someone at the club is looking closely at the contract as the 3 kits they've put out this year are of poor design and look pretty cheap.

Most of the papers and websites have our home and away listed as some of the worst shirts for this season. I'm no Gok Wan, but I would have thought that a club which is trying to make a statement and create an image of one of the big boys, these kits don't help one bit!

I don't know which gobshite "designs" the kits these days but he should be taken out and shot. (Is that a bit harsh ?)

Being an Evertonian does not require buying into this merchandising horseshit year after year.

I don't think that's such a harsh statement to make, given our new keeper's strip is pink. All pink. Nothing but the pink...shit, hand me a Mauser!

Seriously, why can't we have a decent keeper's kit these days? Nobody really seems to discuss the utter crapness of them nowadays, either. It's like we've accepted the fact that our last line of defence looks like an utter wally.

I didn't like them at the time, but I long for the Puma era now. The light blue and black one Paul Gerrard had in the early 2000s was different class by today's standards:

It can't be that hard to see who we play in the league and choose a 2nd shirt that won't clash. Three kits a year (I bet the grey one wont get worn) is just ripping off the fans again.

Andy Kay
40 Posted 12/08/2017 at 05:33:15
And if we really want to break the glass ceiling with our marketing, it's time to look at how many Champions league big boys still wear a Nike or Adidas kit . it makes a huge difference with a world brand. Even the likes of Juventus, Man Utd Chelsea etc have switched recently, they still use Nike or Adidas. Spurs have just gone to Nike now too.

We'll always be "little Everton" with our diamonds down the sleeves going all Retro while we are still with Umbro. Time to wake up!

The current kits are all shite.

The best kit was the one we played in against Sevilla.

So what is the point of having an away kit that is predominantly blue? OK, bluish..

I'd like to see what Addidas or Nike would design for us. Chelsea's home kit looks good being plain and simple.

Your choice but I seem to remember the FA getting the clubs to agree that the annual relaunch of the team shirt should stop – we now get three!

Which one will you be wearing to the final in May?

Instead I suggest that you all just wear some blue in your attire and cease having these ill-informed opinions upon the wank that is sports shirt design. ;)

The kit sales are a joke along with the design teams.

The stripes are okay, but the colour is all wrong. Anniversary kit for me, the rest are rubbish.

This one is better than most of the VPP designs we've had from Umbro the last few tears, but they aren't vfm.

The materials used by Adidas, Puma and to a degree Nike are superior, but each to their own and live and let live.

If kids play in these games in any level, they fall apart. Even the girls in the club shop, agree.

Mark, I claim my balloon; it has to be blue with no stripes.

James Barkley
59 Posted 12/08/2017 at 15:47:58
I agree with Andy Kay – I do like some of Umbro's offerings but lately they're too busy making us look a bit strange. Colours are extremely important in football, I don't care what anyone says.

And three kits a season should be a case for Watchdog. Maybe what with us having a bit of buncy we won't be so keen to rip off our fans anymore? Doubt it.

I too think it's high time we gave Adidas a shot. The three stripes are iconic and an Adidas shirt would be the first one I'd buy since the Moyes-era Puma. Nike was a complete flop IMO. Totally cheap looking tat, they were.

I'd be very happy for the club to churn out the old kits on a regular basis. That would engender fans to look to the past, hope for the future and there is nothing wrong with being nostalgic.

Laura, if I gave you a project to design the next Everton shirt you would do better than this design and it wouldn't be purple, home or away. However you are right it's no big deal but Mike gets his XL Royal Blue balloon with Dixie's face on it and it will play Johnny Todd when the air comes out of it.

In fact the third kit is usually the most wearable in an every day context – it's not really designed to be played in, its designed to be sold. My son likes it so Santa will be popping down the chimney with one of these purple thingies

Move along, nothing to see here.

But I think it may exclude the legions of TW fashionistas.

Speaking for myself (and I never buy a shirt), I think the colour and design would never offset the tum of a 56-year-old. I suspect I am not alone on this site!

As for me deciding the fashion sense of any youngster. Ha, that would be funny and so so so wrong.