Barry on the verge of Baggies switch 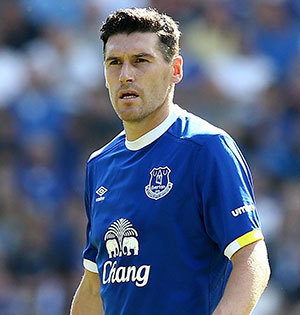 Updated Gareth Barry could wrap up a move to West Bromwich Albion this week after undergoing a medical today.

The veteran midfielder was expected to recover from a minor ankle injury in time for next Monday's trip to Manchester City after missing the first leg against Hajduk Split but stepped up interest from Tony Pulis means he is set to leave Everton after four years at Goodison Park.

Barry, who missed the season opener against Stoke City at the weekend with the injury, is in line to pass Ryan Giggs as the player to have made the most Premier League appearances of all time this season and Blues boss Ronald Koeman admitted over the weekend that he would not stand in the 36-year-old's way if he needed to move to accomplish the feat.

With two new signings in his area of the park already through the door this year in the form of Davy Klaassen and Morgan Schneiderlin, plus the emergence of Tom Davies, Barry faces significant competition to get into the Everton team this season.

“It depends," the Dutchman told the Liverpool Echo when asked if he would consider selling or releasing Barry before the transfer deadline.

“If players are unhappy...

"Gareth is a great professional and I'm happy if he will stay but if he will like to move, OK, we will see what happens. I don't know.

“At the moment we don't have to make that decision.”

There were reports late last night that Barry could undergo a medical with the Baggies as soon as today ahead of a proposed switch to The Hawthorns and that appears from sources to have been the case.