Sandro a doubt for Hajduk visit 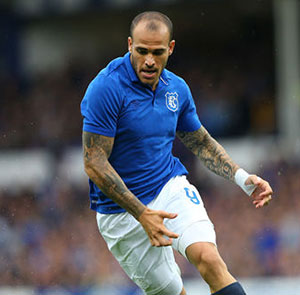 Sandro Ramirez could miss the first leg of Everton's Europa League playoff against Hajduk Split with an injury picked up against Stoke.

The Spaniard took a knock early in the match but was able to continue until he was substituted with 13 minutes to go in the Blues' opening-day victory.

Sandro grimaced as he left the field and Ronald Koeman told the media at his pre-match press conference today that the striker is a doubt for the first leg against Croatians.

It leaves the Dutchman, who said he still expects to sign more players once Gylfi Sigurdsson's acquisition from Swansea City is confirmed, short on options up front while he openly seeks reinforcements in that department following the sale of Romelu Lukaku to Manchester United last month.

Dominic Calvert-Lewin, Wayne Rooney and Kevin Mirallas are his three fit striking options, all three of whom were involved against the Potters on Saturday.

Additionally, James McCarthy is ruled out once more as he continues to battle a knee injury. The Irish midfielder has been sidelined for the past few weeks but has been included in his country's provisional squad for the next round of international fixtures at the start of next month.

"We have some problems," Koeman admitted. "James McCarthy is out with a knock on his knee. Sandro Ramirez is doubtful for tomorrow.

"We have 17 [out]field players but it's enough for tomorrow. Of course, we need more because everybody knows we have really a tough 11 days coming up."