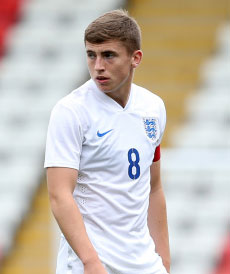 Jonjoe Kenny made a much-anticipated start for the first team

Everton made comfortable work of a poor Sunderland side to ease into the fourth round of the League Cup under at Goodison Park tonight.

Jonjoe Kenny started his first senior game of the season at right back while Mason Holgate was deployed at left back and Oumar Niasse was named on the bench.

A quiet opening quarter of an hour finally yielded an effort towards goal after Dominic Calvert-Lewin had got free and Nikola Vlasic lashed a volley into the side netting.

Later in the first half, Sandro Ramirez whipped a free kick on target but his effort was caught well by the Sunderland 'keeper.

Emerging as the standout performer of the first half, Vlasic went close again with an excellent effort that just missed.

The Croatian helped create the opening goal, though, playing in Dominic Calvert-Lewin to fire Everton into the lead for the first goal in any competitioon since Gylfi Sigurdsson's in Split.

The second half was just a few minutes old when Sandro slipped a great ball in for Calvert-Lewin who doubled his account by hammering a shot into the top corner to make it 2-0.

It was very nearly 3-0 shortly afterwards when Davy Klaassen won the ball back and crossed for Calvert-Lewin but the young striker was denied a hat-trick when his diving header came off the post.

James Vaughan missed narrowly with a header before Niasse came on and he would notch his first senior goal for Everton with a nice finish from Tom Davies' ball. The Senegalese striker took the midfielder's pass down and cracked a half-volley home to finish the scoring