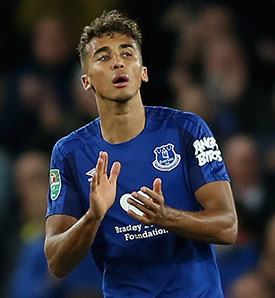 Will DCL lead the line again in Lyon?

Everton travel to Lyon for their latest Europa League Group E fixture in what is effectively a win-or-bust scenario for the club.

Having lost two of their first three group games, the Blues' chances of progressing to the knockout rounds largely rest on their ability to come up with a victory in what is, on paper, their toughest assignment of the competition thus far.

For David Unsworth, it's a chance to demonstrate to the Everton board that he can do better in charge of the first team than was the case on Sunday at Leicester City where his side went down meekly to a 2-0 defeat. The 44-year-old former defender had only been in his caretaker role for six days at that point but now, with 11 days in the hot-seat, he will be hoping be in a better position to rally his troops into a better display.

As Unsworth is no doubt discovering, the Everton job comes with a number of challenges, not least the lack of a recognised, experienced striker to provide a focal point up front but also age and a lack of pace at the back. Phil Jagielka, Ashley Williams and Leighton Baines's combined age of 100 was exposed at the King Power Stadium at the weekend and 18-year-old Morgan Feeney's promotion to the first team training this week was an indication that the stand-in boss has recognised the need for more youthful legs in defence and to give the older heads a break.

Whether Feeney will follow fellow teenager Beni Baningime in going straight into the starting line-up remains to be seen but Jagielka and Baines haven't travelled to France. Mason Holgate, 20, is also a candidate at centre-half but he was overlooked in that role for the past few weeks by Ronald Koeman who preferred to use him as a right back.

Further forward, with Rooney also staying behind, some other frequent question marks remain: is Dominic Calvert-Lewin, Oumar Niasse or Sandro Ramirez a better option to lead the line; should Aaron Lennon's experience trump the energy and inventiveness of Nikola Vlasic or Ademola Lookman; and what of Kevin Mirallas, arguably the best attacking player in a grey shirt in the first half on Sunday but sacrificed at half-time for the manager's substitutions?

With a vital game against Watford looming this coming Sunday and Everton a long shot to qualify from their Europa League group, Unsworth may feel he is on a hiding to nothing in this fixture. That could influence his team selection and might see his line-up skew younger, allowing some of those greener players to press their claims for more regular action.

The scenario for the Blues is fairly simple: win, and they are right back in the qualification mix and with the additional factor of a morale-boosting win under the belts; lose or draw and it's more or less kiss goodbye to the Europa League and focus on the Premier League.