Unsworth: 'Incredible' win was for the fans 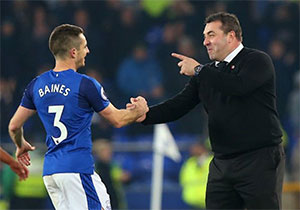 David Unsworth dedicated Everton's thrilling 3-2 victory over Watford to the club's long-suffering fans as his team followed another depressing defeat in Lyon last Thursday with the Blues' first Premier League win since the 23rd of September.

The 44-year-old, possibly in the dugout as caretaker boss in place of Ronald Koeman for the last time, oversaw a rollercoaster game at Goodison Park that saw Everton come back from 2-0 down to win a League fixture for only the second time since that Wimbledon game 23 years ago.

The club's plight this afternoon might not have been as desperate as that relegation-defying encounter in 1994 but the Blues were in danger of losing a sixth successive match and remaining second from bottom heading into the international break.

Unsworth was full of praise for this players, many of them young and relatively inexperienced, and he credited them with the spirit to overcome a difficult situation after goals from Richarlison and Christian Kabasele had put the Hornets into a 2-0 lead.

Oumar Niasse halved the deficit, Dominic Calvert-Lewin equalised and Leighton Baines scored the winner from the spot late on before former Everton midfielder Tom Cleverley despatched a penalty of his own the wrong side of the post.

“Incredible!” Unsworth beamed in the tunnel after the game. “I'm just delighted for the club and the fans that they can go home tonight happy.

“I didn't expect the second half to pan out quick like the way it did but to get the win and the manner of being two goals down [makes it] very special and it's a night that will live in the memory for a long time.

“The players have been magnificent. I've said all along that they've given me everything and they have. We've had a tough run of fixtures but that's no excuse. When you play for this great club you know that you've got to go away from home and give big performances and get results because our fans demand that.

“It's really important that we always go into every game and try and win. It was great to come back here tonight, to come home and bet 40,000 Evertonians behind us and that one's for them tonight.”

Unsworth's prospects of succeeding Koeman on a permanent basis appeared remote before kick-off after three successive defeats but he stressed that he did not know if he would be offered the post in light of today's win or if the board will look elsewhere for a new manager.

"Whatever will be will be," Unsworth said. "I have been the proudest man in the world to take charge for the last two weeks and no one can take that away from me.

"I know nothing about it. I'm sure I'll speak to the chairman and owner and I'll keep giving my best for this wonderful club."