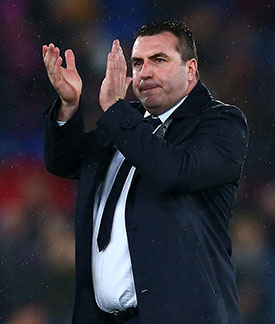 David Unsworth says that the players who took the field against Atalanta have to shoulder their share of responsibility for an awful drubbing as he admitted he had learned something about "numerous" players.

The Italian side completed the double over the Blues in Europa League Group E, notching eight goals to one over the two matches as they capitalised on dreadful defending to run away with the game at Goodison Park and secure their passage to the next stage of the competition.

Atalanta were ahead by a single goal at the interval after Bryan Cristante slotted into an empty net after just 12 minutes. His team-mate, Timothy Castagne, had been ushered into the Everton box by slack defending by Michael Keane and once Joel Robles had been drawn out of his goal, it was a simple finish for Cristante.

Robles denied Alejando Gomez from the penalty spot but Cristante later doubled the visitors' lead when he rose highest to head home a corner.

Sandro Ramirez pulled one back with an excellent finish, his first competitive goal for Everton, but the wheels came off the home side's attempts to equalise when Robin Gosens lashed home from the edge of the box and Andreas Cornelius plundered two late goals to complete the rout.

Unsworth had handed starts to some of the players previously overlooked over the preceding month after he took over from Ronald Koeman but Sandro aside, few, if any, will have done their cases much good on a torrid evening.

“I asked the players to make it difficult for me to leave them out and the majority have made it easy for me,” Unsworth lamented afterwards. “Those players who've been moaning or asking me for opportunities to play in the first team were given that tonight.

"I know it was a strange game and there was nothing riding on it for us but we had paying Evertonians there tonight.

“I stressed before the game that we must compete and the way we capitulated at the end was not acceptable.

“The players know that and they are a little bit fragile at the moment so you've got to be careful with this group but, thankfully, there are players to come back into the fold who have shown over the last couple of games that they are not fragile, that they are willing to be courageous and show a work ethic and desire to play for that shirt.

"I've learned a few things about a few players tonight.

“We're asking players to run and play harder, to get to the ball quicker than they're used to. Some can and some can't. You can't carry players. When your best player on the night is 18," the caretaker boss said in reference to Beni Baningime, "it tells you everything you need to know.

“I'd love to think every single player is hurting like I am. If they're not, they shouldn't be here at this great club. They need to know that the minimum requirement [at this club] is 100% desire.

“You need the players to give you everything they've got. Every manager needs to take responsibility but when the players step over the line they have to take it too.

"Like I said, I've learned something about numerous players tonight and that's good. It doesn't feel good and I'm sure every Evertonian would tell you the same but, again, if those players aren't hurting tonight like I am they shouldn't be here."