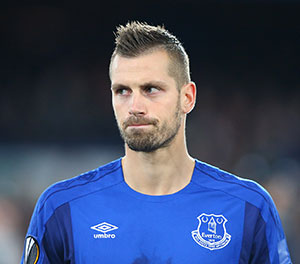 Sam Allardyce says he wasn't expecting the reaction to his decision to introduce Morgan Schneiderlin as an 80th-minute substitute in today's win over Crystal Palace.

The Frenchman was thrown on as a replacement for Idrissa Gueye who had reportedly picked up a knock but boos rang out from some supporters, many expecting new signing Cenk Tosun to be given a run-out instead, as the change was prepared and then when Schneiderlin ran onto the pitch.

Schneiderlin has come in for sharp criticism from many supporters this season for a perceived lack of commitment, not helped by his apparent dismissal from training last autumn by stand-in boss David Unsworth.

And his performance in the 5-1 defeat against Arsenal has been highlighted by some as indicative of a lack of effort on his part this season following a successful start to his Everton career last season.

"I was surprised, very surprised" Allardyce said after the 3-1 win over Palace at Goodison Park today. "I've not heard it before, so I was a little surprised

"He's a very important part of the squad this year.

"Lots of players haven't played up to their potential that we know they've got this season but we're starting to get better at home. It's away from home that we've had problems."

This was only the second win that Allardyce has overseen since the turn of the year but he was pleased with his players' reaction to last Saturday's debacle at The Emirates.

"I was apprehensive today after being done 5-1 away from home but the players have responded magnificently," he said. "We have shown what we can do and hopefully we can improve for the rest of the season.

"We have to look at our own record and that is where the mainstay of our season lies. In the eight home games I have been here, we have picked up 17 points and conceded just four goals.

"We are getting it right, entertaining the fans and getting the result. The unfortunate away form is causing us the problems."