No FA action in Holgate-Firmino spat 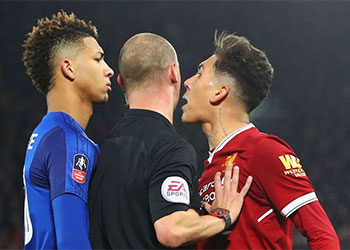 The Football Association have announced that Roberto Firmino won't be censured following accusations of racism levelled at him by Mason Holgate in last month's cup derby.

Holgate complained that the Liverpool striker had directed a racial epithet at him as the pair squared up to each other in the FA Cup Third Round tie at Anfield which sparked an FA investigation into the incident.

A statement on the FA's website said: "Following a detailed investigation into an allegation of discriminatory conduct against Liverpool's Roberto Firmino by Everton's Mason Holgate, The FA can confirm that it will not be taking any disciplinary action against Firmino."

No action will be taken but Everton made public their appreciation for the fact that the incident was looked at by the game's governing body:

Everton Football Club acknowledges and appreciates the thoroughness of the FA's investigation into the incident that took place during our FA Cup third round game on 5 January.

The Club welcomes the FA's expression of complete satisfaction that the allegation made by our player, Mason Holgate, was done so in absolute good faith, that proper process was followed and that there is no suggestion of malice or dishonesty on Mason's part.

The Club also welcomes the FA's commitment to continue to treat all allegations of a discriminatory nature with extreme seriousness. In challenging circumstances, the FA has reached its determination and, as a Club, we accept this. We will continue to offer the full support of the Club to Mason and will make no further comment.