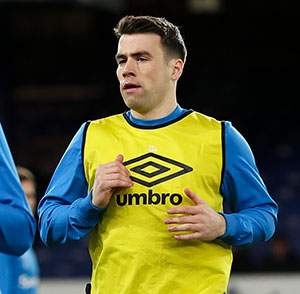 Seamus Coleman says that Everton need to repay the fans's support by putting in winning performances in the next two games.

The Blues return to Goodison Park to face Brighton this weekend after yet another demoralising away defeat at Burnley, their sixth on the bounce in all competitions since the goalless draw at West Brom on Boxing Day. They then travel to struggling Stoke looking to pick up only their second away win of the season.

Saturday's trip to Turf Moor should have ended in victory after Cenk Tosun's first goal in Everton colours set them on their way against a Clarets side that hadn't won in 12 games but missed chances at one end and horrendous defending at the other allowed Burnley to come back an claim all three points.

The match marked Coleman's second return from injury this season, this time from a thigh injury, but after providing the crucial flick-on for Tosun's goal, he was unable to prevent the Blues conceding two goals in the second half.

The Irish skipper says that he feels for the travelling fans who braved icy conditions and a freezing afternoon to pack out the away end and has pledged a response.

“I don't think any of the lads came here thinking about anything other than getting three points,” Coleman explained in the Liverpool Echo. “You need that positive mindset.

“When they got the first, maybe that's when we need to stand up and be counted and fight back and maybe get the second ourselves, which didn't happen. Unfortunately, there was no way back for us then.

“Can I understand the fans' frustration? Yeah, of course. They're travelling all round the country supporting us. We know what it means to them.

“It's no different if I'm sitting in the stand and my team aren't winning away from home, then of course you can understand their frustration.

“They're paying good money. It's up to us on Saturday to put in a performance for our home fans, and then kick on and try to win away from home.

“We need their support between now and the end of the season, and we've got no questions about that, because the away fans have been fantastic, and it's up to us as players to make sure we perform.”