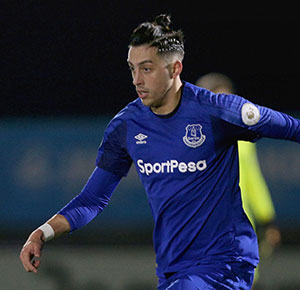 Ramiro Funes Mori came through 90 minutes of action for the Under-23s last night and says he is 100% ready for Saturday if selected.

The Argentine played in the second string's 2-0 win over Swansea City at Goodison Park, his third appearance for the U23s since regaining fitness following two surgeries on his knee.

Funes Mori tore the meniscus in one of his knees playing for Argentina last year but is now ready for Everton's run-in and on course to be included in his country's World Cup squad.

“I've been training [well] these past weeks," he told evertonfc.com. "Even though I wasn't playing for the first team, I've been playing for the Under-23s to get the rhythm, get the tempo. I'm 100-per-cent fit to play and I'm ready for Saturday.”

Funes Mori, who also turned 27 yesterday, hasn't played a first-team game for Everton since coming on as a second-half substitute in the home win over Hull City almost a year ago.

He says it was great to be playing at Goodison again, however, and with Ashley Williams suspended and Phil Jagielka battling injury, his prospects of playing are good.

“It felt good to play back in Goodison, to feel the pitch, the stands. I really miss it so I'm very happy.”


Simon Hermansen
1 Posted 06/03/2018 at 16:39:05
Worth throwing him in I’d say. He’s a decent defender, though prone to the odd error, but let’s compare that to what we’re seeing at the moment, couldn’t possibly be worse!
Brian Wilkinson
2 Posted 06/03/2018 at 17:05:24
Can you imagine Funes Mori, Coleman, Baines and Holgate in our back line this weekend instead of the three stooges, maybe rusty but Jesus wept, cannot be any worse than what we have witnessed this season.
Iain Love
3 Posted 06/03/2018 at 17:45:32
I agree with the previous posts. Strikers must rub their hands together at the thought of playing against Keane and Williams .

I was shocked at how poor they where against Burnley. Pick your man, then effin mark them. I thought Sam was a great defensive coach?

Your friend must be absolute nuts to have Williams as his hero.

James Power
10 Posted 06/03/2018 at 19:18:52
He has got so much better since he has been injured. I just hope he is good as we mis-remembered him to be. Although as people have already said, can't be worse than we have been putting out. Can he?

Dear old Funes Mori... he has missed the poison pot that Goodison has become, simmering tension and spitting invective of a ground tinged with sadness and furious disappointment for far too long.

But what joy could be unlocked by players with effort, passion and some get up and go.

Makes ya think, my friend.

We could do with 10 more Argy internationals.

We should be proud to have him amidst this shit show. Williams and Keane have been a farce the last two games.

As said though, this oaf manager will probably ignore him. Nothing surprises me with Everton anymore.

John Kavanagh
18 Posted 06/03/2018 at 20:20:49
We should definitely risk Mori as he can head a ball and can get more than 1 cm off the ground, which Keane and Williams respectively are incapable of. Thank you, ref, for Williams's 3 game ban, which we should have appealed in the hope that the FA would then extend it.

Funes Mori is definitely a professional and committed to the cause (as was evidenced by his coming back early for pre-season training in 2016 to get himself extra fit). In the mess we are in now, a professional attitude like that is all important. Shame about his occasional bouts of headless chicken, but he is capable of improvement.

I'd also risk Baines, despite his loss of pace. As this is risky, Martina and Kenny should be on the bench as cover, along with Jagielka or Keane.

The last two performances have probably seen off his England World Cup chances, though. You shouldn't be as soft as he seems if you're that slow or limited technically. Let's see how he goes next term under a manager worthy of the name.

The sooner we get a manager & coaching team in capable of giving that, the better, especially for all our younger players. I'd have had Unsy back in last Monday just for that.

The friend was chatting with him after the match, JPR having a pint while holding a handkerchief to his cheek, dabbing away the blood as it leaked through the stitches.

And let's hope Funes Mori isn't as good as when he got injured, as unless he's vastly improved, it will be like the second coming of Bolasie, another player whose stock rose every day he was injured.

Time to bring back Funes Mori and Jags or even Holgate to replace the dog shit of Keane and Williams. It really couldn't be any worse

Given up my ST this Saturday again for our Rugby re-union. England v Ireland the week after.

If they gel. we may only need one CB in the summer. Neither have much pace but they are quicker than Williams and Jagielka so we will be able to play a higher line.

He is prone to an odd error but so are the rest of them and at least he might help us with set pieces at both ends and adds the additional balance of being left footed. If we beat Brighton, it should take the pressure off a little, so here's to hoping he can make an impression.

Holgate hasn't really had a look in since the "racism" issue.

I just wonder if the management were a bit upset with him.

He made Mason stay behind and write "Have it" 1000 times. Despite paying the penalty, Mason still doesn't get a game as Sam believes he still harbours those fanciful notions.

Looks like this particular youngster, is proving difficult to ruin.

I also think that Holgate should play despite the problems faced because he has potential too.

Keane has had to play with different players every couple of games and he needs to get an established partnership going.

He is also probably confused because he has got to consider covering Williams position too for 90 minutes because he is fucking shite.

"Neither have much pace but they are quicker than Williams and Jagielka. "

I have to disagree with this though, Jags is still the fastest defender we have on our books.

Spot 0o Re Jags. I can't think of many quicker centre backs, even now.

It's like people don't really watch the game and just assume because he plays centre-back, is in his mid-30's and Jamie Carragher says we have no pace at the back, then Jags must be slow.

I once read a match report many years ago where the journo noted about Osman "The Everton youngster has pace to burn". I had to laugh!

People fall into the trap that because he is "old", Jags has had it. Well he might not quite hit previous highs but he's still the best defender by a country mile – and he's no slouch either.

Funes Mori makes mistakes, and takes risks, but I would prefer him alongside Holgate. Jagielka on bench, and maybe a chance for one of the U23 lads (Foulds).

I'm not sure who you have been watching, but Holgate is a footballing centre-back trying to play with a midfield who either run away from the man in possession, don't have the courage to take it from defenders, or simply don't show for a ball.

You couldn't have been watching if you think he can be compered in any way to Hoof Williams.

I must have been watching a different Holgate all season then, it's all about opinions of course but the Mason I've seen slice the ball out for throw-ins or punt the ball 60 yards even when there's been a ball on in front of him.

But at the end of the day, when all is said and done, we had that with Stones playing it out from defence, I'd rather we had a defender that just enjoyed defending, watching Juventus tonight and Chiellini would be a dream in defence!

Holgate is the one skilled central defender we have... and he's the one you claim hoofs it.

I know opinions will always differ, but when I see some of the comments on here and wonder what people are watching.

I'd rate them in this descending order:

Jagielka – Is still quickish but has definitely lost a yard a pace, was never the best in the air. Still probably our best defender when fully fit.

Holgate – Has some of the raw potential but does seem to switch off on occasion and lose his man. Could be a good centre-back in time.

Funes Mori – When fully fit, he is decent in the air, okay on the ball, and firm on the challenge. Also gets a few goals. He's prone to wild moments and losing position and we're yet to see how his injury affects his physical ability.

Williams – Has had some decent games this season but far too many suspect moments. Lacks pace and does not always read the game well. Does not organise the defense in the way I hoped he would.

Keane – A huge disappointment to me. He's good in the air but that's about it. He's horribly slow, does not mark well and is caught ball-watching far too often. Does not seem to anticipate danger and as such his positioning is often out. Probably on a par with Williams but, as he is younger and cost us £30m, he gets the bottom spot.

If I were playing fantasy football, I'd probably keep Holgate and Funes Mori and sell the rest to start again. Shame we got Keane instead of Maguire who looks twice the player at half the price. Perhaps he'll improve under a proper manager in a settled system but, as an amateur centre-back myself, I see some basic flaws that would worry me at any level.

Anyone who thinks Jagielka is past it, have a good look at the Anfield derby a few months ago.

If fit. I would start Jagielka without hesitation.