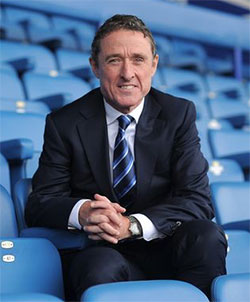 Everton's Chief Executive, Robert Elstone, has been approached by Rugby League about heading up their Super League according to reports.

The 54-year-old has apparently heads a list of a dozen candidates under consideration to oversee the organisation based on his work with the Blues and both his experience and love of Rugby League.

Prior to joining Everton, Elstone worked at BSkyB and Deloitte & Touche and was on the board at Castleford Tigers having already played a role in the initial creation of the Super League in the mid-1990s.

According to The Guardian, no deal has been completed but "it is understood the clubs are confident of tempting Elstone away from Everton."

Elstone was promoted to CEO a decade ago following the departure of Keith Wyness and has been heavily involved in the club's plans to relocate away from Goodison Park.

Recently appointed to the Board, he is currently charged with finalising planning and funding for the proposed stadium at Bramley-Moore Dock but his potential departure from Everton, along with that of Chairman Bill Kenwright, has been the subject of rumour in recent weeks.