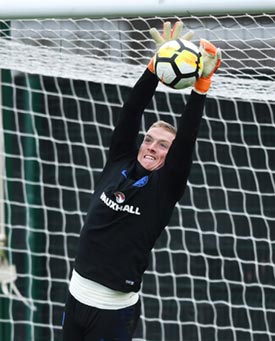 Jordan Pickford got another chance to impress Gareth Southgate when he started in goal in a friendly against the Netherlands and kept a clean sheet.

Everton's No 1 is in competition with Stoke's Jack Butland, Burnley's Nick Pope and West Ham's Joe Hart for who gets selected as England's first-choice goalkeeper at this summer's World Cup in Russia.

As such, this first friendly of the current international break was seen as an excellent opportunity for Pickford to press his claims following his impressive form for the Blues since joining the club from Sunderland last summer.

Despite conceding 50 Premier League goals already this season, a symptom of Everton's dismal campaign and, in particular, their defensive weaknesses, the 24-year-old is regarded as one of the few positives of 2017-18 and is viewed as a long-term star in the making for club and country.

England faced the Dutch this evening and won 1-0 thanks to Jesse Lingard's solitary goal. They now take on Italy on Tuesday as they begin their final preparations for the World Cup.