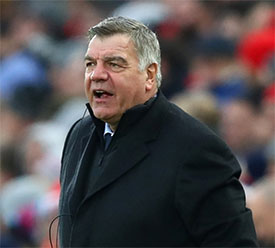 Sam Allardyce says that he would benefit from Everton's hierarchy providing some clarity over his position as speculation regarding his future continues.

The 63-year-old signed a shorter-term contract than is usual when he agreed to an initial 18-month deal last November, a compromise arrangement following the dismissal of Ronald Koeman as Blues manager.

Allardyce was tasked with preserving Everton's Premier League status, a feat that was confirmed this evening with Southampton's failure to beat Leicester City, but uninspiring performances and results mean that all indications suggest he remains unpopular with a majority of Toffees fans.

Talk of current Shakhtar Donetsk manager, Paulo Fonseca, coming on board as his replacement continues to bubble in the background, albeit from unreliable tabloid stories and speculative Internet betting sites — the Portuguese is as short as 2/1 to become the next Everton boss — which has contributed to the uncertainty over Allardyce's position.

Allardyce has said that he has regular contact with major shareholder and effective owner, Farhad Moshiri, and that he is already preparing for pre-season and 2018-19 beyond but, in today's conference with the print media, he inferred that he was not sure of his future.

Asked if he wanted Moshiri to make a statement confirming that he would be in charge after this season, Allardyce is quoted by The Telegraph as saying:

“I'm not going to tell you what I would do, but I would agree with what you say, yes. I leave them to make their mind up about what they do and what they don't want to do.

“I don't think it is my position. I leave them to make their mind up about what they do and what they don't want to do.

“His [Moshiri's] life is hugely busy in terms of what he does in the day-to-day running of a massive, multi-billion pound company. The direction from him has to come from the people he chooses below him and who he chooses to work with at the football club.

“If there is no clarity then you have to speculate on that. It builds the pressure but I'm not the boss. I'm the boss of the team and I make the football decisions with the rest of the staff but only [the board] can decide if, or when, they want to come out and say what they want to say.”