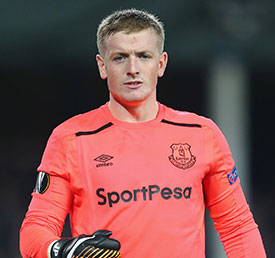 Jordan Pickford picked up the two biggest prizes at Everton's end-of-season awards this evening after being named Young Player and Players' Player of the Season.

The People's Club award went to Seamus Coleman, Phil Jagielka and Leighton Baines received the Howard Kendall award, while the Chairman's Blueblood award went to Tom Evans, the father of young Alfie who passed away at Alder Hey Hospital a few days ago.

Angharad James was named Everton Ladies Player of the Season.

Pickford, who was also voted Players' Player of the Season by his team mates, was rewarded for being, by some distance, the outstanding performer in an otherwise disappointing season. The 24-year-old arrived from Sunderland last summer in a deal that will ultimately be worth £30m and quickly established himself as a fan favourite with some impressive early performances.

His form during a difficult period earned him the attention of England manager Gareth Southgate and he is the favoured candidate to start this summer's World Cup as his country' first-choice ‘keeper.

Pickford: "I've enjoyed my first season here and it's great to win this award at the end of it,” he said as he collected his Young Player of the Season award.