I wonder about our ability, indeed desire “to run where the brave dare not go”. Part of our DNA I believe as Evertonians is to “reach the unreachable star” – let’s do what’s required to achieve it.

So sang Frank Sinatra. There are times when supporting Everton, being interested in their business approach and questioning how on earth we will compete on the pitch, paying for an expensive but not hugely cash generative stadium, I wonder about our ability, indeed desire “to run where the brave dare not go”

Now some supporters will claim that this is just another opportunity to be negative about the club pointing to the “award winning” achievements of Everton in the Community, the match day ticket pricing policies and some of the softer aspects of fan engagement as examples of bravery, initiative and evidence of the club “getting things right”. There’s no doubt that the charity has improved the lives of thousands of people and provides a valuable service to those most impacted by years of austerity. Not only that, but it has saved the lives of numerous people, one or two I know personally who frankly wouldn’t be here today if it wasn’t for the good people of EITC.

But, and with the greatest of respect to the work of the charity, it can also be viewed as a comfort blanket within the club itself. Has the good work of the charity become a substitute, a false feeling of well-being that doesn’t match the condition of our core business – being a successful football club?

I say this because any analytical or objective view of the business would point at a myriad of issues where more than three years into Moshiri’s share ownership of the club that are either unresolved or that progress is painfully slow. It would also point to our competitive position not improving to date.

Objectively, let’s look at what I consider the five main issues:

With the extensive investment in the playing squad our cost base (as measured by wages plus amortisation costs) doubled between 2016 and 2018. Projected costs for 2019 show a further increase. 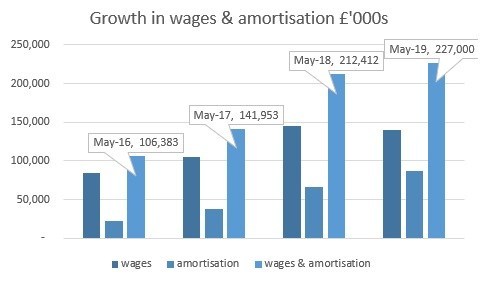 When plotted against turnover (expressed as a %) the issue becomes very apparent (2019 estimated): 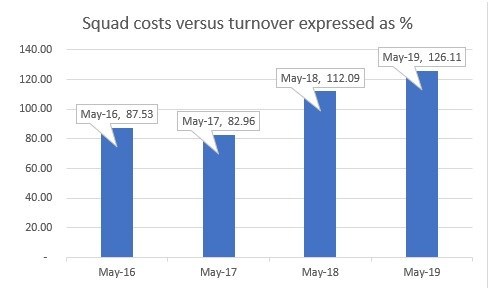 The final comparison is against the “top 6” financial clubs in the Premier League, all of whom have significantly higher squad costs but most importantly, even higher levels of turnover: 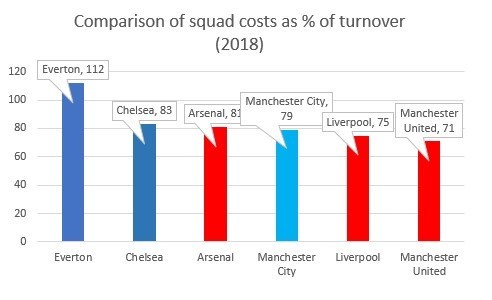 It’s well documented that following the arrival of Brands in particular, reducing squad costs whilst rebuilding the squad is a key priority. To be fair to Brands he has not had a complete summer window in which to operate. Much is expected this summer both in terms of recruitment but also in removing those surplus to requirement. From a financial perspective the need is very clear, we are spending more than we are earning, and the ratio looks particularly unhealthy versus the top 6.

The previously noted increase in costs brings the importance of income generation firmly into focus. Historically, it has been an area the club has operated poorly; impacted by the constraints of Goodison Park, a much lauded affordable ticket pricing policy and a failure to exploit the commercial opportunities presented by being ever present in the Premier League (one of only six clubs).

Turnover has 4 main contributors, broadcasting income, gate receipts, Sponsorship, advertising and merchandising, and “other commercial”. Totals are shown below: 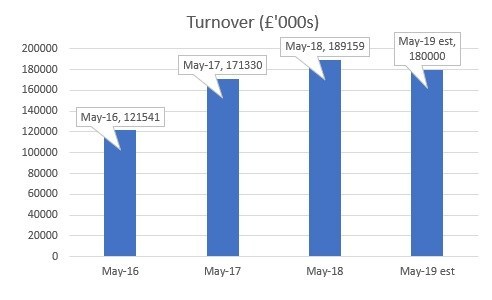 The key differentiator for all clubs is the income they generate from their own activities. For Everton, gate receipts at Goodison are effectively capped at current levels given capacity crowds and the ongoing commitment to affordable pricing. Much of our commercial activities are outsourced which again impact the ability to grow revenues other than by renegotiation when contracts expire or indeed termination if there was a commercial case. 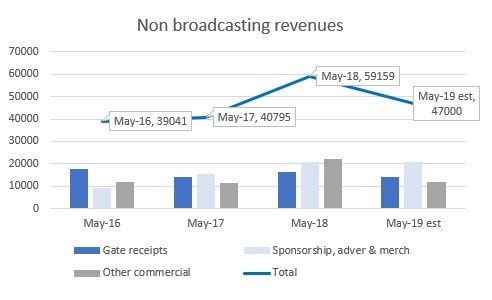 The figures for May 2018 include revenues from our 2017-18 Europa League campaign totaling approximately £12.5m. The estimated 2019 figure takes into account the failure to qualify for European football.

It is true that our commercial performance has begun to pick up. During the Moshiri era the following major deals have been negotiated:

Sponsorship of Finch Farm by USM worth £6 million a year

Replacement of Chang by Sportpesa as main shirt sponsors, 5 year deal to 2022 worth £9.6 million a year.

Shirt sleeve sponsorship by Rovio (Angry Birds), thought to be worth just under £1 million a year.

A renewed deal with Fanatics, (kit and other merchandising) length and value unspecified.

A renewed deal with Umbro (shirt manufacturer, “technical partners”) length and value unspecified but reliably reported at around £9 million a year.

Several minor sponsorship deals including Blackwell, Moneycorp, Davanti, Sure and Fratelli Beretta each worth up to several hundreds of thousand pounds.

However, it is also true that each of these deals pale into insignificance when compared to the sponsorship and commercial deals enjoyed by the “big six”. Whilst in real terms our non broadcasting income is beginning to grow our low base and inability to win the largest contracts means that in cash terms we lag further behind those above us. 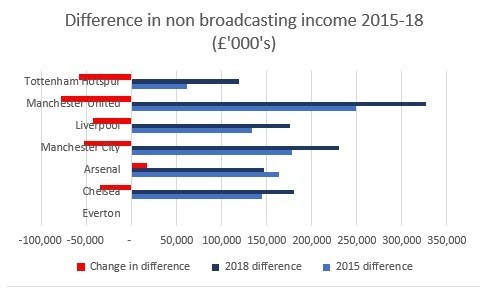 The above figures show that the club has significantly spent much more than the income it generates. It’s interesting to look how that was achieved and what happens in the future.

The difference between spending and income has been covered by three contributors:

With a stadium to fund, it is not clear where or how continued operating losses can be funded without an increased contribution from our major shareholder, Farhad Moshiri.

There is not the time and space to cover in detail the issues regarding Bramley-Moore (much of which is covered in previous articles and podcasts). However it is accurate to say that in the 3 years of Moshiri’s involvement the progress of the stadium has been patchy at best. The stadium progress has been materially affected by the proposed Commonwealth Games bid, the proposed funding by Liverpool City Council, Robert Elstone’s departure and a harsher investment environment in the last 18 months.

As a result, with cost increases, it is fair to assume that certain elements of the stadium have been scaled back, namely capacity and dare I say it, but the “grandeur” of the proposed stadium. If I may speculate for a moment the clever money would say whilst we will have a magnificent new home designed by Dan Meis, it will inevitably be smaller and less grand than perhaps reasonable expectations in 2016 anticipated.

The consequences of such, a smaller capacity, increased costs but lower income generation put pressure on all involved. Whilst the stadium remains a necessity as does the location, it is fair to say that the financial impact on the club (and perhaps the major shareholder) is less attractive than previously thought.

Nevertheless it is essential that the stadium is built, and if I may be so bold, built to the highest specification and capacity we can possibly achieve (certainly more than 52,000) in order to maximise the immense opportunity it presents us. I will continue to argue the very clear business case for 60,000.

The stadium will be cash generative, it will increase our global exposure and will certainly attract a new class of sponsors and partners. Now is not the time to lose faith but to reach out to every possible contributor to the success of the stadium and work even harder to achieve beyond our expectations. The impossible dream?

Finally, and perhaps less objective than the above:

Who are we? What do we want to become? Is our branding locally, nationally and internationally consistent with our behaviour?

For the first time in my life time as Blue I worry about our identity. There’s been plenty of times when I’ve worried about our ability to compete (most of the last 30 years) but I’ve been pretty sure about what the club represents and felt that a return to our past footballing glories, whilst increasingly more difficult due to competitive erosion, was both possible and a shared ambition.

I have to be frank – I’m not sure at this moment in time. We’ve been ambitious (but unwise) in our spending, we are on the cusp of a brand new stadium, we have a much better footballing model in a highly impressive Director of Football, so why do I feel this way?

It’s down to the owner and board of directors. I want to hear and see an unwavering commitment to becoming a footballing force again through their commercial judgement and excellence, their established operational capability, their vision and ability to be ahead of the pack not lagging behind, and in addition the “smart” behaviour of Brands and Silva. I want a mind blowing stadium not just presented with a fait acompli but with real and proper engagement with the many fan groups & interested parties. I want a focus by the executive team on our primary business – football. Everything else we do, including the great work in the community, benefits most from our success as a football club – that is the most effective and efficient way of achieving great things elsewhere, success on the pitch – doing it and the means of doing it should be our sole focus.

If that sounds like a great sense of entitlement it’s not I’m afraid. It’s the expectation that should come with being associated with Everton Football Club.

Part of our DNA I believe as Evertonians is to “reach the unreachable star” – let’s do what’s required to achieve it.