Vlasic is happy in Moscow 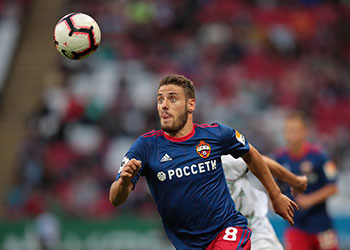 Nikola Vlasic says that if it were up to him, he would stay with CSKA Moscow beyond the length of his season-long loan from Everton.

The Croatian international joined the Blues in August last year from Hajduk Split in what had the potential to be a dream move but it quickly soured as the club's season came off the rails under Ronald Koeman and Vlasic was largely ignored by interim boss, Sam Allardyce.

In a conversation with Marco Silva this past summer, it was made clear to the 21-year-old that he would struggle for consistent playing time in the first team and the decision was taken to send him out on loan.

CSKA duly signed him and Vlasic has been a revelation in Russia, scoring seven goals in 19 appearances, including some crucial goals in the Champions League, one of them the winner over holders Real Madrid.

While Silva's hopes and plans for the player over the long term aren't clear, Vlasic himself has been speaking of how happy he is in Moscow and that he regards CSKA as home now.

“I am very happy and glad I'm at CSKA," he told Bob Soccer. "I truly believe that I am at home, this is my team, and if the decision depended only on me, it would be a very easy choice. I'd say yes and remain a CSKA footballer, but, unfortunately, there are several other interested parties.

“It's particularly necessary to understand Everton's position, how it relates to the situation, what they think. It's not up to me. Let's wait until the summer and see what the decision is.”