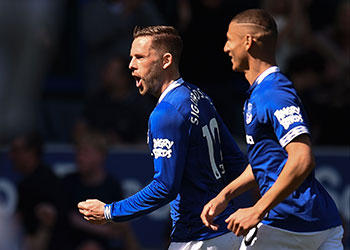 Gylfi Sigurdsson enjoyed another fine afternoon against United, scoring a brilliant 30-yard goal and setting up another for Theo Walcott
Oli Scarff/AFP/Getty Images

Everton atoned for their hugely disappointing defeat at Fulham by powering their way to an impressive 4-0 drubbing of Manchester United.

Richarlison, Gylfi Sigurdsson and Lucas Digne scored with terrific strikes apiece before Theo Walcott scampered away to round off a superb afternoon for the Blues and Marco Silva, arguably Everton's best result for two years.

Lucas Digne's long throw-in was knocked on by Dominic Calvert-Lewin and Richarlison, who had been denied by the visiting goalkeeper minutes earlier, swivelled onto it to slam the opening goal into the roof of David de Gea's net.

Marcus Rashford went close on what would be a rare attack for United when he fired over after collecting a ball over the top of the home defence but Everton broke away nine minutes later and Sigurdsson drilled an excellent shot into the bottom corner from 30 yards.

With Michael Keane back in central defence alongside Kurt Zouma and Morgan Schneiderlin slotting into midfield seamlessly in place of the suspended André Gomes, Silva's side were in dominant mood, hustling United out of their stride and forcing errors.

One misplaced pass was picked off by Schneiderlin who fed Richarlison later in the first half but De Gea saved again from the Brazilian to ensure that it was only 2-0 at the interval.

Richarlison had to be withdrawn with an apparent rib problem a few minutes into the second half but his withdrawal in favour of Walcott didn't halt the momentum established by Everton who extended their advantage in the 56th minute.

Sigurdsson's attempted shot was deflected behind and when De Gea punched the resulting corner clear, it fell to Digne who rapped it back past the Spaniard with a crisp first-time effort from 25 yards out.

Sigurdsson almost embarrassed the United keeper directly from another corner shortly afterwards as De Gea kicked it off his line but he was left stranded in the 63rd minute when the Icelandic star sent Walcott away and the substitute finished with aplomb, guiding the ball into the far corner.

Ole Gunnar Solskjaer's men were well beaten, yet were invited to try to reduce the arrears with the majority of possession in the final quarter of the contest but, while they finally got an effort on target in the closing stages, they never looked like penetrating Jordan Pickford's goal.

James McCarthy was handed his first appearance in 15 months when he came on for Idrissa Gueye for the last 15 minutes while Digne was forced off late on with a foot injury but Everton eased their way through the closing stages in brilliant Easter sunshine to complete a fine victory.

The result moves the Toffees back into 7th place on goal difference but they must await the outcome of Watford's home clash with Southampton and Wolves' game against Arsenal in midweek before they know where they stand going into the final three matches of the campaign.