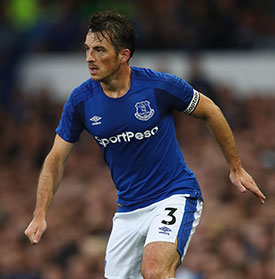 Leighton Baines could be handed a one-year extension to his Everton contract as the club prepares for Marco Silva's second season at the club.

The veteran full-back's current terms expire this summer but despite losing his place to Lucas Digne, Baines has remained an important member of the squad and deputised impressively for the Frenchman earlier this year.

The 34-year-old has played over 400 games in all competitions for Everton after signing from Wigan Athletic in a £6m deal 12 years ago and, according to MailSport, the Blues are not ready to let him go.

The same report claims that while Baines looks likely to be retained for another year at least, negotiations are ongoing with Phil Jagielka.

The club captain is two years older than Baines but has also called upon on occasions this season to plug gaps when Michael Keane has been out ill or Kurt Zouma ineligible to face his parent club, Chelsea.

"They will be the first ones to know what is our idea because they have all the respect of ourselves. They are fully focused on what we want in our desire and our goal as a team. They are there, they are there working really hard for us to achieve what we want because it is the most important thing.

"You are talking about our captain, our sub captain they are really important players and they deserve all our respect about the situation."