Now accepted as the world’s first black football player, Guyana-born Andrew Watson was to have a career that would bind him tightly to both Glasgow and Liverpool. He would also make a guest appearance in the colours of Everton.

His father, Peter Miller Watson, was born on 16 June 1805, in the Orkney Islands and was the fourth son of James Watson who acted as factor for a Scottish nobleman. His mother was Scottish, neé Christina Robertson, whose family were sugar plantation owners in the colony of British Guyana.

When Peter was just 3 years old his father died and his mother was married for a second time to Orkney-born Dr Thomas Traill who had a practice in Liverpool. She moved to the Mersey seaport with her sons and gave birth to another six children. Peter later trained to be a lawyer in London before joining his elder brothers in British Guyana where he administered legal affairs at the family sugar plantation. While there, he formed a relationship with a local girl named Hannah Rose who bore him a daughter, Annette, and a Son.

Named after his late uncle, Andrew Watson was born on 18 May 1857, at Georgetown but soon moved to England with his sister when his father purchased a small estate near Worplesdon in Surrey. At the time of the 1861 census the Watson children were visitors at the home of Elizabeth Buchanan at Colwith in Staffordshire who is listed as a school teacher and fund holder.

Watson was being educated at Heath School in Yorkshire when his father passed away on 22 April 1869 leaving him partial beneficiary in a will that amounted to £35,000. (Some went to both Annette and Hannah Rose.) Watson later attended Kings College, Wimbledon from where he enrolled at Glasgow University but left after one year to become a partner in a dry goods business.

Watson had begun his football career with Maxwell FC when he married Jessie Armour at St Ninians Episcopal church in Pollockshaws on 6 November 1877. He gave his address as 97 Shields Road and his occupation as an apprentice engineer. (The couple had 2 children, Rupert and Agnus.) He next took up the secretarial duties with Parkgrove FC, who played on Trinidad Park, and could be contacted at 21, Rutland Crescent in the Plantation area of Glasgow.

The finest achievement of the Parkgrove team came in March 1879 when they reached the quarter-final of the Scottish FA Cup but were beaten 5-0 by the eventual winners, Vale of Leven. The many fine performances given by Watson attracted the attention of the prestigious Queens Park club who gained his signature in the summer of 1880.

Occupying the position of full-back, Watson had the most successful time of his career with the Hampden Park outfit where he twice won the Scottish FA Cup and was capped three times for Scotland. He later sold his business interests and made a move to the Edmonton area of London where he signed for The Swifts.

His new teammates were a group of wealthy amateurs, based at the Dolphin Hotel in Slough who were captained by England International, Charles Bambridge. Watson represented them twice in the FA Cup competition until they were eliminated by Notts County and the Old Etonians respectively. He also increased his “social standing” by joining the exclusive Corinthian FC and took part in their Easter Tour of 1883.

On Good Friday they were beaten 4-3 by Accrington and on Saturday they beat near neighbours Church 2-0. After spending some leisure time in Liverpool, the Corinthians played Bootle on Irlam Road Cricket Ground, where they drew 2-2, before ending the tour with a 5-2 defeat at Stoke. Watson appeared to be enjoying a pleasurable life in London until the sudden death of Jessie forced him to return to Glasgow with his 2 children and live with his sister in Govan. He re-joined Queens Park with whom he won a third SFA Cup winners medal before moving to Merseyside where he planned to pursue a career in the Merchant Navy.

Watson had no sooner taken up residence at 76 Derby Road in Bootle when former Everton player Tom Evans invited him to join an invitation XI that he was putting together to play Bootle. His side contained seven Everton players plus Irish International Archie Goodall who was also residing on Merseyside. Mr Evans had now moved from Everton to the expanding village of Garston where he oversaw the foundation of a new cricket club. He approached his former football club who agreed to help him draw attention to this new venture with the staging of a football match. It attracted a crowd of around 2,000 people who watched Bootle win 1-0. After the game Andrew Watson signed for the Hawthorne Road club.

His presence greatly increased the quality of a Bootle side who would now have the best season of their short history. They battled their way through the local stages of the FA knockout and received an away tie against a Smethwick based side who played under the banner of Great Bridge Unity. The club, meanwhile, had a local cup tie to contend with against Everton.

The two sides had been at loggerheads for some time and no fixture had been arranged for the current season. They had both also applied for membership of the new Football League that was to commence next season. The Merseyside clubs were now heavily dependent upon players born outside the region as was reflected in the line-up.

Tensions were running high when play commenced at Anfield in front of a capacity crowd. The game that followed was the most brutal witnessed on the enclosure and two players from each side were badly injured. Watson was not amongst the casualties as Everton won 2-0. His side now had two weeks to recover before competing in an FA Cup tie that was veiled by intrigue.

In the days leading up to the game, the Midland club secretary received an anonymous letter claiming that Watson was being paid for his services and therefore Bootle should be expelled from the competition. Whoever wrote this cloak-and-dagger style of correspondence claimed to be acting in the best interest of football and signed himself “Smith of Oakfield”. The game went ahead under protest and the visitors won 2-1. The charge of “professionalism” against Watson, after inquiry, was “not proven” and this enabled his side to compete in the quarter final.

On 7 January 1888, Bootle became the first team from Merseyside to play an FA Cup tie in London when they met Old Carthusians at Kennington Oval. The Metropolitan spectators gave Watson a warm welcome when he appeared out of the pavilion as did the several members of the opposition who had also played for the Corinthians. The Charterhouse side included Neville Cobbold who was to prove a match winner. The England International scored a goal in each half to give them a 2-0 victory.

Watson then returned to Glasgow where he married Eliza Tyler in February 1887 and returned to Bootle where she gave birth to a son, Henry Tyler, on 18 March 1888. They took up permanent residence in Liverpool and left Rupert and Eliza to be cared for by their Grandparents.

Watson continued playing for a Bootle side who were on course to win the Liverpool Cup. However, he suffered an injury against Bolton Wanderers that reduced him to the role of spectator when Bootle lifted the trophy with a 3-0 win over Stanley. This picture shows a Bowler Hatted Andrew Watson posing with the winning team. 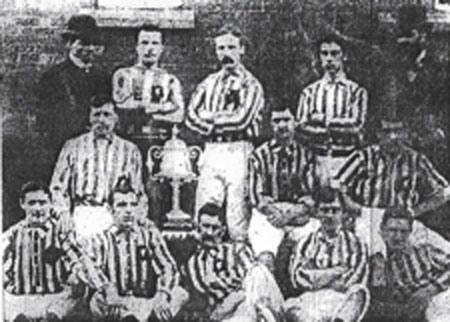 On 11 January 1891 a second child was born, Phyliss Kate, and her baptism record declares that the Watson family are living on Grey Road in Walton. The certificate also states that the head of the household has become a marine engineer and a record of his voyages may be found at the Maritime Museum in Liverpool.

On 2 October 1893, Watson signed aboard the SS Louisianan and gave his address as 17 Fairfield Street in Liverpool. He served on this vessel until the 7th of April 1896 and was living at 187 Grove Street when he transferred to the SS West Indian. Watson rose to the rank of Chief Engineer while aboard the SS West Indian and was residing at 28 Cranbourne Road when he quit the sea on 10 January 1899.

The 1911 census finds the Watson family residing in a large terraced house at 3 Hallville Road in the affluent Mossley Hill area of Liverpool. They later moved to Richmond-on-Thames where Andrew Watson died on 21 March 1921 and was buried at Putney Vale Cemetery in London.

Very interesting read thanks for your efforts...