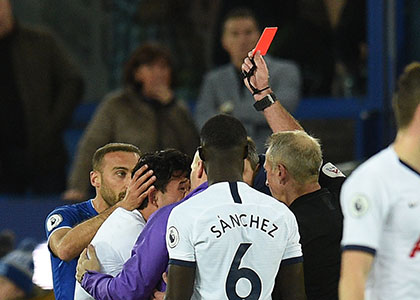 Cenk Tosun rescued a point for Everton deep into extended stoppage time but a result that may provide a further reprieve for beleaguered manager Marco Silva was marred by a sickening injury to André Gomes.

The Portuguese suffered what appears to have been an awful broken ankle following a challenge by Son Hueng-min that resulted in the South Korean being sent off with 11 minutes left of the regulation 90 minutes.

Play was held up while the stricken Gomes was strapped to a stretcher, taken off the field and whisked straight to hospital and the Blues were given 12 minutes of added time in which to claw their way back from a 1-0 deficit after Dele Alli had given the visitors the lead in the 63rd minute.

Everton, who had laboured to create anything of note for much of the match, looked destined to be frustrated in the closing stages despite their numerical superiority until Lucas Digne's excellent centre was powered home with his head by Tosun.

Two teams struggling for form and sitting in the bottom half of the table before kick-off played out a first half depressingly bereft of quality, made worse by typically horrendous officiating from referee Martin Atkinson.

Serge Aurier tested Jordan Pickford with a wicked delivery from the right that the goalkeeper batted away and Gomes headed disappointingly over the crossbar at the Park End as Silva's side struggled to fashion chances.

Richarlison had Everton's brightest moments before half-time when he spun on Digne's low cross in the 32nd minute but fired straight at Gazzaniga in the Spurs goal and later rolled Davinson Sanchez before lashing over.

The second period had begun in the same vein until the match came to life with an hour gone. First, Richarlison finished a smart move by latching onto Digne's cut-back but was foiled by a good save by the Tottenham keeper.

Then, a costly mistake by Alex Iwobi in his own half left Spurs in to take the lead. The former Gunner passed straight to Son who released Alli to turn inside his marker and drill a shot past Pickford to make it 1-0.

Everton tried to push in response, almost prompting Ben Davies to turn the ball into his own net before a lengthy VAR check looked like it might hand the home side a penalty after Alli was shown on the replays to have handled the ball in his own box but no foul was awarded.

The match turned from frustrating to sombre in the 78th minute, however, when Son appeared to go in late on Gomes, the midfielder collided heavily with Aurier and was left prone in unmistakable distress near the touchline.

Under advice from the VAR official, Anthony Taylor, Son's initial yellow card was changed to a red and the Spurs forward, wracked by tears at the extent of Gomes's injury, was led down the tunnel while Silva prepared a double change that saw Gylfi Sigurdsson and Dominic Calvert-Lewin come on with Tom Davies the other player to make way.

Calvert-Lewin came close to equalising when he headed an excellent Sigurdsson cross over but it was Tosun who finally made the breakthrough with 97 minutes on the clock to ensure that the spoils were shared.

The result keeps Everton in 17th place, one above the relegation zone, and still searching for the consistency expected of an expensively-assembled side.