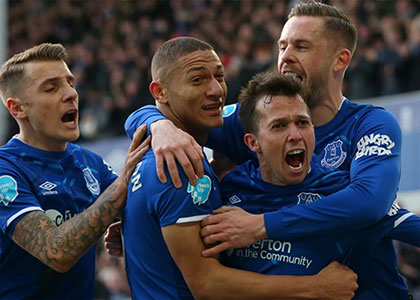 Everton extended their unbeaten run to five games and enhanced their prospects of qualifying for Europe with a win over Palace that was harder-fought than the scoreline suggests.

A moment of individual brilliance in the second-half by Richarlison proved to be decisive, his breakaway goal restoring the lead Bernard had given the home side in the 18th minute before Jordan Pickford atoned for a horrendous lapse by somehow denying Christian Benteke a second equaliser.

Dominic Calvert-Lewin added an insurance goal three minutes from time and really should have made it 4-1 but missed a sitter in stoppage time.

As he promised to do for the trip to West Ham before Michael Keane was ruled out of that game with a neck complaint, Carlo Ancelotti elected to rotate some players out, bringing Keane into defence in place of Mason Holgate, Seamus Coleman in for Djibril Sidibé and restoring Bernard to the starting XI in place of Alex Iwobi. Morgan Schneiderlin came in for the suspended Fabian Delph.

Everton started on the front foot and Lucas Digne forced an early save from Vicente Guaita with a low free-kick after Calvert-Lewin had been felled by Gary Cahill but it was Crystal Palace who came within inches of opening the scoring after 13 minutes.

James McArthur laid the ball off to Patrick van Aanholt in the Blues' penalty area and he almost surprised Pickford with a shot searching for the near side of the goal but it came back off the post.

Everton had struggled to play their way through the visitors' press in the opening quarter of an hour but they worked their way down Palace's left flank impressively with 17 minutes gone in a move that ended with Walcott swinging an excellent ball into the box where Bernard arrived unmarked to volley superbly past the goalkeeper from a central position.

Ancelotti lost Walcott soon afterwards, however, when the winger picked up an injury that saw Sidibé come on as a 24th-minute substitute to play down the right flank.

Bernard came very close to finding Calvert-Lewin's head in the middle but his ball back across just eluded the striker and Richarlison barely tested Guaita with a tame shot while, at the other end, Pickford spilled the ball to Wilfried Zaha and referee David Coote waved away claims for a penalty when the Ivorian winger went down under Coleman's attentions.

Everton had largely been in control in the first half but they started the second badly, giving away possession cheaply and then surrendering their slender advantage six minutes after half-time.

Palace turned possession over in midfield, Zaha quickly played Benteke in behind Lucas Digne and the Belgian fired a low shot straight through Pickford's hands to make it 1-1.

And the visitors almost went ahead six minutes after that when a corner from the right caused chaos in the Everton box, neither Coleman nor Richarlison could claim the ball at the near post and it bounced up, off Benteke and onto the post.

A minute later, Everton were back in front and it was all Richarlison. The Brazilian picked the ball up deep and ran at three Palace defenders before cutting into the box and firing an early shot across Guaita and inside the far post.

The hosts almost lost that lead just four minutes later, though and when a cross from the Palace left deflected into Benteke's path, the striker seemed certain to score but Pickford made himself big and blocked the header with his shoulder.

At the other end, Sigurdsson jinked his way past three defenders and tried to prod home but was foiled by the goalkeeper's left hand.

With Bernard appearing to be struggling with a minor injury, he was withdrawn in the 65th minute, Tom Davies coming on and eventually dropping into a five-man midfield with Richarlison moving out wide.

It had the effect of presenting a more defensive posture but Roy Hodgson's side weren't able to push on as the second half wore on and it was Everton who scored next.

Richarlison rose above everyone to steer a header from a corner onto the bar and the ball dropped to Calvert-Lewin in front of goal where he had the simple task of knocking it in.

Then, a minute into time added on, Richarlison forced one more save from Guaita and the keeper's block fell straight to Calvert-Lewin but the young striker contrived to spoon the ball over the almost open goal.

With his post-match comments, Carlo Ancelotti was under no illusions about the fact that the performance from his team overall was not the best but they got the three points that lifts them into seventh place for the time being before the rest of the matches over the winter break are completed.