Fans' Forum candidate argues for representation from beyond the British Isles 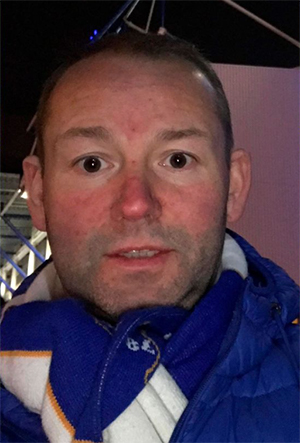 For the past few years, Everton's Fans' Forum has provided an official link between the football club and its supporters, serving as a touch-point for the surfacing and discussion of ideas relating to club policy, its governance, issues affecting fans, and fan-sponsored initiatives.

Made up of 15 elected Evertonians serving 3-year terms, the Fans' Forum operates under a Chair, a position currently occupied by Jazz Bal, with two Vice-Chairs, and meets on a monthly basis with club representatives in attendance.

The Forum is in the final stages of electing four of its members, with nine candidates chosen at the end of a 3-month application window at the end of last month; all supporters who have an Everton Customer Number are eligible to vote between 7th February and 21st February.

What's unique about this year's vote is that one of the nominees is based well outside of the British Isles in Chicago, USA. Ex-pat Scouser and lifelong Blue, Tony Sampson, is on the ballot, hoping to provide representation for the 50-plus affiliated international supporters groups who don't currently have a voice on the Forum.

Tony's candidacy comes at a time where the internationalisation and global reach of the Premier League is becoming an increasingly important factor and focus at the club but it remains an area where, anecdotally at least, fans feel Everton have not been as proactive as other clubs, particularly in the United States with which the former players Brian McBride, Landon Donovan and Tim Howard have provided potential marketing links.

North America has over 40 supporters groups and Howard currently serves as Everton's official club ambassador to the US but Tony feels that, with the rise in popularity of “soccer” on that side of the Pond, particularly on the back of the US Women's National Team's successes, and the fact that the World Cup will be hosted on the continent in 2026, there is plenty of scope to expand the Toffees' reach in that part of the world in the coming years.

It's a sentiment shared by a number of Blues fans based in the US, like Dr David France, who feels that having a member on the forum representing international fans is vital given the increasing size and reach of the Evertonian diaspora.

Since moving to Illinois a year ago, Tony has thrown himself into the long-established Chicago Toffees supporters club which is run out of AJ Hudson's pub and has nearly 600 Facebook members and 2k+ Twitter followers. He has quickly picked up experience in developing fan engagement there and partnering with Everton FC and Everton in the Community to raise $3,000 for the charity and drive new membership of Chicago Toffees.

Tony argues that there are differences in how overseas fans connect with the club compared with UK-based Evertonians and that understanding these perspectives is critical in being able to represent them effectively.

He feels that his experience of being a match-going Blue in the UK and now one exiled in the States makes him an ideal candidate to provide a bridge for supporters who want to be listened to and have their views heard on key club issues, as well as how to strengthen the ties and the communication between international supporters and the club itself.

Voting for the Fans Forum is open until 21st February; if you have an Everton Customer Number, you can cast your vote for your top four choices here.


Ray Roche
1 Posted 16/02/2020 at 13:57:37
Interesting article that appears to have been overlooked in the furore of the FFP debate and City's woes. Particularly concerning our friends in the USA who frequent these pages.
Ray Roche
2 Posted 16/02/2020 at 18:23:51
I make no apologies for bringing this article to the fore again, seeing as our Stateside friends are in evidence. It might interest them if they've not noticed it before.