Schneiderlin out for two months after knee operation 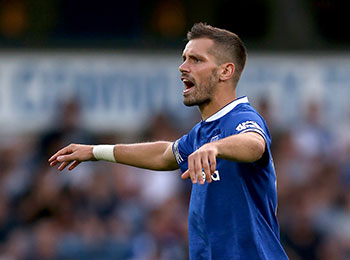 Morgan Schneiderlin could be out of action for two months after requiring surgery on a knee injury that he sustained in last weekend's match against Arsenal.

The Frenchman tore the meniscus in one of his knees in the 3-2 defeat to the Gunners at the Emirates Stadium and had to be replaced around the hour mark.

Schneiderlin had worked his way back into the starting XI under Carlo Ancelotti following a spell on the sidelines in December with a minor soft-tissue injury but will now miss a chunk of the Blues' remaining Premier League fixtures while he recovers from his operation.

Schneiderlin's lay-off coincides with the return of André Gomes, who replaced him as a substitute last Sunday to play his first competitive minutes since making his own recovery from a fracture dislocation of his ankle last November.

There was better news comes for Ancelotti regarding Theo Walcott, however. The winger, who missed the game against his former team last weekend, is available for Sunday's clash with Manchester United at Goodison Park. Lucas Digne, who was also ruled out last time out, could also return to the side.

"Lucas is training individually," Ancelotti said. "He had a little problem with his calf. We are going to check tomorrow."

I'd get Baningime, at least on the bench, but I reckon Tom Davies may be called up, we need a good full match press to get in their faces and rattle their defence.

Definitely winnable, and a must-win game.

Dave Evans
13 Posted 28/02/2020 at 20:11:03
Good players are dynamic. Quick over 5 to 10 yards when they want and need to be. It makes a world of difference. Barkley was a talented player but didn't have it. Schneiderlin is also one-paced, giving the impression of strolling.

Hope he heals well. When he recovers Ancelotti will still be coach. I think it will be the last chance of his career to fulfil his potential.

He started well, and has been okay recently. But in between he's been awful. We need better.

Brian Hennessy
15 Posted 28/02/2020 at 20:18:57
Unfortunately this increases the possibility of Sigurdsson playing again on Sunday, at a time when what Siggy needs is a kick up the arse via a prolonged spell on the bench.

Hopefully Carlo will opt for Tom Davies instead or indeed Baningime, who really impressed me during his brief spell in the team when he first came on the scene. Hoping to see Coleman back in the team also against Man Utd.

Not hardly. Siggy's problem is dwindling pace and quickness, not lack of effort. He still puts in 110%.

My choice for Schneiderlin's spot would also be Beni Baningime, assuming he's healthy. Rhino said a couple weeks ago that he's been struggling with that bad ankle for a full year.

I think Sigurdsson misses Gueye more than any other player. His pace and immense stamina. Gueye effectively allowed Sigurdsson to play to his strengths, and has never been replaced. Arguably he can't be, like for like. That plus being asked to play from deep more.

But, who is the man?

I pray that it might be Baningime, back to his best, but time will tell,

Carlo is still learning who can be long-term for him. This latest set-back, if you can call it one, is a chance for the manager to look at other options player-wise and formation-wise...

We have no chance of Europe; we blew that chance last weekend. The Man Utd game will no doubt be the same...

As always, it's going to be next season when everything clicks into place and we get back to being a big club...

Paul Jones
24 Posted 28/02/2020 at 23:28:16
Baningime and Davies have the opportunity to establish themselves in what people consider their natural position. Although in recent times, Holgate has been the most impressive player in that position. Better than both Delph and Schneiderlin, who have both been expensive and poor acquisitions. Given that we turned down and offer for Keane, then it would seem expedient if necessary to play Holgate in midfield.

It would seem that there is some advocating that Jesse Lingard would be the great utility answer to our squad next season and best man for a number of positions.

Neville, Gibson, Schneiderlin & Delph seemed to have proven the futility of the "not good enough for Manchester play centre of midfield for Everton theory". Gareth Barry was a relative success in his time but I would have hoped our aspirations are now significantly greater.

I don't believe Tom Davies is up for the job. He's energetic and keen, but is very weak on the ball. His passing and general distribution are awful, and he lacks pace.

I like the lad, and suggest he plays in goal â€“ he can't do any worse than that clown Pickford.

Let's get real, the player in question has been a passenger for all, but a handful of games.

I know the Football World has gone crazy in terms of contracts and wages, but who gets that amount of money for being 'sick'?

If not Holgate as centre-midfielder, maybe the stage could be set for a role for Beni Baningime, I'd certainly like him to get a chance, it's now or never really. I have been a big critic of Sigurdsson this season but let's not forget, he has a formidable scoring record against Man Utd.

He's not been anywhere near the first team for two years plus and hasn't exactly been in a position to further his career anywhere yet.

If needs must, I'd put Holgate in next to Gomes, at least Holgate can use the ball better than Davies.

Hopefully the return of Gomes is just in time for us to step it up a notch.

Jerome Shields
41 Posted 01/03/2020 at 09:03:17
Apparently Sigurdsson's poor form is being blamed on Carlo's team set-up, which it has been suggested, made his usual position under Silva redundant. What appears to have been overlooked prior to Carlo's arrival was Sigurdsson's tendency to go missing during games, which for many of us appears not to have changed and maybe has gotten even worse.

Sigurdsson was second top scorer to Richarlison last season. This season he can't hit a barn door, only scoring once, and has failed to embrace Carlo's positive forward play philosophy.

I think, in Everton's case, as one door closes, another one gets slammed in our face. Schneiderlin's injury means Sigurdsson will almost certainly play, although neither would be missed by me, to be honest.

Jerome Shields
43 Posted 01/03/2020 at 09:19:21
Correction to my post: Sigurdsson was actually joint top scorer with Richarlison last season.
Robert Tressell
44 Posted 01/03/2020 at 09:31:46
Sigurdsson's form was poor before Silva was sacked â€“ but it's true he fitted into the 4-2-3-1 of Silva much better than the current formation. He is a good player, but he needs a team built to his strengths, like it was at Swansea, where Bony would hold it up and two fast wingers would stay wide and create space. Behind him, there were players to sit and do the dirty work.

In that set-up, he scores goals â€“ like he did for us last season. If you push him back into a more orthodox midfield role, then he's very average. If you expect him to be a creative playmaker, then he's average also.

For us to kick on, we need a cross between Bernard (who is creative but doesn't score) and Sigurdsson (who scores â€“ or did â€“ but doesn't offer much else). Hopefully someone will buy him this summer for about 㾾M.

I think the summer transfer window will be exciting for us with Carlo bringing in his players, and you can bet there will be no dead wood as he will know them first hand and their capabilities.

Derek Powell
46 Posted 10/03/2020 at 16:22:02
We should be bringing the kids through now: assess them... keep them or get rid. We need a massive clearout at this club â€“ and that includes those running the club.
Trevor Peers
47 Posted 10/03/2020 at 16:54:32
There are no kids to bring through, we're stuck with OAP Sigurdsson until the summer because there's nobody better and Ancelotti knows it.

His replacement will cost a fortune, quality box-to-box midfielders who can score goals are currently the hardest to find on the planet and our track record of buying the right players isn't very encouraging.

Good luck Carlo, you will need a miracle to find new players who have the skill, desire and heart to lift the present squad out of the mediocre shit which we presently preside over.