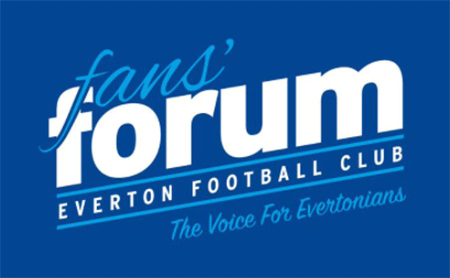 The Everton Fans' Forum has launched a new consultation to gather the views of Evertonians living outside the UK.

Between 30 April and 20 May, international Blues have been invited to tell the Forum, an independently elected group of supporters that meets with Everton FC officials, about the areas of the club that matter to them most and give their views on feedback mechanisms and how they prefer to be kept informed of key developments.

Tony, who is originally from Liverpool, leads the Forum's newly-formed International Project Group, which has set out clear aims to improve the way in which Blues abroad can engage on key issues – and now it needs the views of Everton's international fanbase.

Tony said: “We have affiliated Supporters' Clubs across the globe, and we want to help give them a voice and connect them with other groups. Through the Fans' Forum we want to provide an opportunity for them to share their stories, ideas and views.

“Whilst every fan wants the best for the Club on and off the pitch, the needs of supporters living abroad can be different to those based in the city. We want to understand more about that and listen to the supporters about what they care about.”

Joe O'Reilly, who is also Chair of the Irish Toffees, will lead engagement with supporters' clubs in Europe.

Joe said: “We've spent the past few weeks listening and speaking with some of the supporters' groups in different countries. This consultation is the next step in that process, so we need as many international fans as possible to take part and share their views.”

Jazz Bal, Chair of the Fan's Forum added: “One of the Forum's goals for this year is to improve how we engage with the fanbase, so that we can understand and attempt to deliver on what matters most to Evertonians. The survey is one of the ideas that the International Project Group has been developing for those devoted Blues living abroad. I'm looking forward to hearing more about what they've got to say and how we can support them.”

The survey will be shared directly with all affiliated International Supporters' Clubs.

I left Liverpool at age 19 but still watch every game on Sunday morning, currently on my laptop via Sparksport and check in to ToffeeWeb at least once per day.

There are plenty of Blues over here, three in my local club where I've played and now coach. I'd be interested to host or be involved in an Australasian version of the above most certainly. Regards. Paul Kernot.

I'll definitely be reaching out to Tony in my old hometown of Chicago, but it'll have to be by email... because watching an interview with him on Toffee TV, I had tough sledding with his Merseyside accent!

Next election, I'm gonna run with Jamie on a Homegrown Yank ticket for a seat on the Forum. Need some real Chicago and Boston accents on there.