Coleman: 'Training feels as safe as it possibly can' 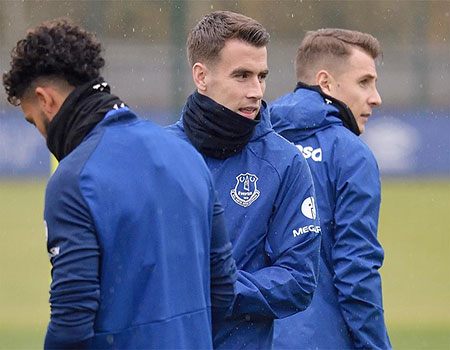 Everton's players returned to limited training at Finch Farm for the first time in over two months today as the Premier League inches towards a resumption of the 2019-20 season.

The campaign and all top-level football in the UK was suspended in March as the COVID-19 pandemic swept the country but the top-flight clubs have remained committed to completing the 92 outstanding fixtures as soon as it is safe to do so.

That began with the clubs agreeing on Monday to resume training at their respective facilities, but with strict protocols in place to mitigate against the spread of novel coronavirus between players and staff, including restrictions on the number of personnel in training groups.

The hope is that the players can get fit enough and for testing for the virus to reveal sufficiently few cases for the season to recommence around a month from now. Tests from this week threw up six positive infections among players or staff, three at Watford, one at Burnley and two at one more as-yet un-named team.

Everton club captain, Seamus Coleman, revealed his excitement at getting back to Finch Farm as he explained the new circumstances under which he and his team-mates will be training for the foreseeable future.

“It's probably the longest I've been away from Finch Farm,” he said on evertonfc.com. “Driving through [the gates] was a great feeling but it's definitely a little bit different.

"The club has taken all the precautions needed. We were in in small groups and it felt very safe. They told us that would be the case but when you got there, you could see the work that has been put in to make it as safe as possible.

"The ideal scenario is we get back playing Premier League football and to do that, as players, we need to make sure we are doing everything right.

"The club made sure of that by telling us the rules and regulations. We couldn't wait to get on the training pitch and it was nice to see some of the lads again and get back out there training. It is up to us as players now to stick to the rules at the club and do what is asked of us.

"There are measurements to tell us how far to stay apart and a one-way system around the building, so you are not crossing paths with people. It feels as safe as it possibly can and, hopefully, we can move to phase two as quickly and safely as possible."


Jerome Shields
1 Posted 21/05/2020 at 23:00:55
I expect Coleman to have benefited from the rest and I would expect he would have put maximum effort into his training in isolation. Gbamin probably also benefited, since he would be doing the same training as everyone else, which would have not been the case if the season had been underway.

When they are all back playing, we will see which players put the effort in.

I did, as many others did last weekend, watch those games, although having said that, invariably I gave up half-way through. Although there was some skill on show, it was more like watching a kick-around or practice session at Finch Farm, but less enjoyable.

Dave Abrahams
4 Posted 22/05/2020 at 09:17:41
It doesn't sound anything like the football we know, keeping away from each other at all costs. Well, good luck with this experiment because that's all it is, an experiment. It will never take the place of real football.
Tony Abrahams
5 Posted 22/05/2020 at 09:35:57
Troy Deeney said that not many players have got a problem with phase one, but this will change once they start bringing in more contact into the sessions.
Michael Lynch
6 Posted 22/05/2020 at 09:38:19
My feeling is still that, if they're going to play at all, it should be in a stand-alone competition. For example, I'd happily (well, quite happily) watch a mini-league played at Old Trafford between Everton, Liverpool, Man Utd and Man City with a trophy at stake. A few thousand fans from each club could be selected by ballot to go and watch and make a bit of noise, while social distancing could be respected. Surely the TV companies could sell that to their viewers?

As it stands at the moment, I don't see any great danger in doing this - the infection rates are comparatively low at the moment and, as others have said, we need to start getting back to some version of normality now. But simply picking up the PL where it left off, in such restricted and altered circumstances, is utterly ridiculous.

Good idea for us and it would work for Chelsea, Arsenal, Spurs and West Ham. You may get Southampton, Bournemouth, Brighton and Crystal Palace in a group. Villa, Leicester and Wolves could be supplemented by Sheffield Utd. But not sure how it works with Newcastle, Burnley, Watford and Norwich. Unless all the clubs get something similar, they won't go for it.

What would be more likely if this sort of route was followed is that the paymasters at Sky would want their darling clubs (don't expect us or Leicester to get a call) to take part in a 6-team tournament. The rest would be left out altogether.

I will cancel my season ticket, period.

I watched the German version of MOTD last Saturday, and like most on here, it was difficult trying to get excited beyond the sterile (empty) environment.

It's good that our players are excited, and let's hope we are not disadvantaged by this all.

Credits to Lyndon and Michael for keeping the site ticking over.

I will cancel my season ticket, period."

If the Premier League get to whatever phase is in place just before resumption of the league games, and Liverpool's entire first team is required to isolate themselves, due to an outbreak of coronavirus within their squad, will they require Liverpool to compete with just their back-up players?

What if the above happens and their youngsters blow the title?

Will they keep banging on about integrity then? Or will they null and void the league?

Alan J Thompson
12 Posted 22/05/2020 at 17:10:49
Look on the bright side, Lads. Nobody will get caught by undercover police giving a lift to three friends, having a party with a few young ladies 'cos you can't go out or arguing with the wife on whose turn it is to risk getting the milk, and all while filming it on your phone.
Kim Vivian
13 Posted 22/05/2020 at 17:52:02
Winston - it galls me to say it but the RS youth squad would probably see them over the line, there's so much daylight behind them.

Just give them the tainted 2019-20 trophy and start planning for a new season.

Good idea. A competition that people can identify with. Match practice for players. Media companies more than happy.

This season should be declared null and void, like any other season that was interrupted by a major event. Better for the clubs to move on in preparation for next season.

Bob Parrington
18 Posted 23/05/2020 at 08:40:44
South Australian view from afar. We are lucky. No new cases for weeks and now completely free of known cases for about 14 days. But we are not opening our borders or our pubs yet. Other states, such as NSW and Victoria have new cases, are not virus free yet are trying to apply pressure to our state government to open our borders and we are telling them to fuck off (politely). So we are being accused of "grandstanding".

And here are you in UK with heaps of new cases still and yet the EPL want to start matches again. Crazy IMO

In SA our concern is a second wave that will remove all the benefits from the efforts against the first wave. Are we being precious or sensible?

Charles Brewer
19 Posted 23/05/2020 at 09:08:59
I think we can be confident that no matter what happens, by 2021 the vast majority of football supporters will still be of the view that Liverpool have never won the Premiership.

Dick Fearon
20 Posted 23/05/2020 at 09:16:31
Bob @18,
Here in WA as in SA, the Capital and Northern Teritories plus Queensland are just about clear of the bug. Still they are loosening their tight controls very carefully.
This is down to their Premiers taking quick action and not waiting for the Federal Government to take control.
NSW and Victoria the two states with by far the largest populations are behind the 8 ball due to allowing giant cruise ships disembark thousands of passengers into the general populace when it was known Covid-19 carriers were aboard.
Bob Parrington
22 Posted 23/05/2020 at 10:19:22
Agreed, Dick, I think Western Australia has done a great job as you potentially had cruise ships banking up to disembark, I think.

Still not sure what to do next for South Australia as our business is suffering, albeit with help from the job keeper program. It covers about 1/3rd of our wage bill but we are down close to 50% on last year's turnover. Still, we're thankful for what the Government has done.

What I don't want is frustration of lockdown to take-over and bring on phase 2, which might be more damaging. What's that phrase my mum in Moreton, Wirral used? "Patience is a virtue, try it if you can" â€” or something like that. Certainly, patience is needed.

Frankly, I would not like tho be at the top of the Premier League decision-making team. It's a lot of dosh they're having to think about. Maybe they need a new PR manager!

Ditto chaps. I have already cancelled my Season Ticket and asked for my money back re unplayed games. End of!!

Paul Jones
24 Posted 23/05/2020 at 14:23:09
Last time I watched national news, we still have a pandemic with social distancing, so the return of that a "sport" that will require the support of national resources more urgently needed elsewhere would be a wrong call.

A reckless decision was made when Liverpool played Atletico Madrid. It is time for football to be sensible for the common good.