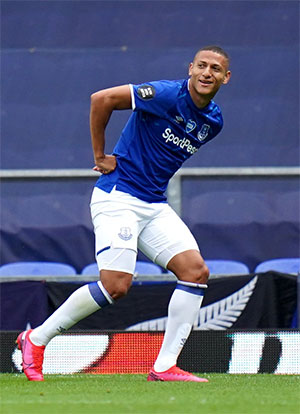 Everton hung on to claim three points against Leicester City to register a second successive victory in the Premier League.

The Blues were 2-0 up and coasting at half time thanks to Richarlison's opener and a penalty by Gylfi Sigurdsson but when substitute Kelechi Iheanacho pulled one back early in the second period, it prompted a defensive posture from Carlo Ancelotti that kept the Foxes at bay.

Leicester, who had the most of the ball even in the first half, would enjoy two thirds of the possession overall but particularly after Yerry Mina was introduced with 22 minutes to go, they found Everton very difficult to break down and the Toffees held out for the win.

Ancelotti had made two changes to the side that started against Norwich, with Sigurdsson coming in for Tom Davies and Bernard making way for Anthony Gordon. And it was the teenager who served up the first goal when he collected Lucas Digne's header, cut the ball into the box for Richarlison and the Brazilian rapped it home first time.

Dennis Praet saw a shot deflect behind off André Gomes at one end before Everton were handed the chance to double their advantage from the spot with a quarter of an hour gone. After a lengthy review, Wilfred Ndidi was adjudged to have handled the ball in an aerial duel with Michael Keane and Sigurdsson stepped up to stroke home the Toffees' first penalty of the season.

A second spot-kick was waved away when Dominic Calvert-Lewin tumbled in the box under a shoulder charge from Caglar Soyuncu and Keane headed a corner into the roof of the net as the home side threatened to extend their lead.

Leicester almost halved the deficit eight minutes before the break, however, when Keane blocked Youri Tielemans's volley off a corner and when the Belgian sprung the offside trap from the rebound, Jordan Pickford did well to save from Johnny Evans to ensure it remained 2-0 at the interval.

Digne forced a save from Kasper Schmeichel early in the second half with a deflected shot from distance after a Calvert-Lewin effort had been charged down but just a couple of minutes later it was 2-1.

Tielemans was given too much time to clip a ball into the Everton penalty area where Mason Holgate knocked it into Iheanacho and the striker had space to size up a shot and convert uncontested from close range.

With the Foxes' tails up and the hosts struggling to keep hold of the ball, it seemed as though an equaliser was just a matter of time, especially after Richarlison was forced off with an injury in the second half.

And the visitors came within inches of levelling when Pickford failed to claim a routine cross and Keane almost knocked it into his own net. The defender hacked the ball off his goal line in the nick of time, however.

Brendan Rodgers had thrown James Maddison on in an attempt to turn the tide but while the midfielder started well and had a shot deflected narrowly over, he couldn't pick his way through Everton's rearguard. Iheanacho, meanwhile, sliced a gilt-edged chance over after Pickford had flapped at a high ball to his right-hand post.

Leicester tried to press in the closing stages and substitute Ayoze Perez popped up in the stoppage time with what appeared to be a goal-bound effort but it deflected safely wide.

The win means that Everton are undefeated since the resumption of Premier League play following the coronavirus shut-down and have kept four successive clean sheets at Goodison Park.

It lifts them into 11th place in the Premier League, still eight points off sixth place but just a couple off Arsenal in seventh with six games left.