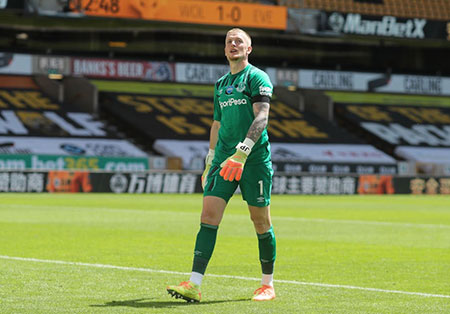 Jordan Pickford had another erratic afternoon, almost dropping a clanger either side of good saves that kept the score down against a more accomplished Wolves outfit

Everton turned in another dreadful display and slumped to a comprehensive defeat at Wolves as the scale of the task facing Carlo Ancelotti was laid bare.

The Italian was forced, by injuries to the likes of Mason Holgate and André Gomes, to deploy an experimental line-up featuring Lucas Digne as a third centre-half in a five-man back line and suffered a further setback when Yerry Mina experienced a recurrence of his thigh problem but that couldn't mask another gutless overall performance from his team.

The Blues ended up going down to a 3-0 defeat but it could and should have been worse because Diogo Jota and Adama Traore both spurned gilt-edged chances to add to the misery of the visitors who offered almost nothing going forward themselves.

The early going suggested that Ancelotti's make-shift line-up, that had Leighton Baines and Theo Walcott as wingbacks, might successfully contain Nuno Espirito Santo's well-drilled outfit and that it might be an even contest.

Daniel Podence and Dominic Calvert-Lewin had similar efforts saved inside the first 3 minutes, the latter from a terrific Walcott pass, the like of which would be depressingly rare over the course of the match, but it soon became clear that Wolves were much more effective with the ball.

Matt Doherty surged through Everton's porous midfield and shot wide, Digne was forced to make an excellent covering tackle to deny Ruben Neves, Jordan Pickford made a smart one-handed save to turn Podence's shot behind at his near post and Raul Jimenez tested the England keeper with an overhead kick, all before the half-hour mark.

The hosts did take the lead in first-half stoppage time, however, when Digne clumsily brought the lively Podence down in the box and referee Anthony Taylor awarded a penalty that Jimenez casually despatched after sending Pickford the wrong way.

Having initially replaced Mina with Seamus Coleman in the 31st minute, Ancelotti switched to a more conventional back four at the half-way stage when he withdrew Baines and introduced Jarrad Branthwaite for his senior debut.

The teenager made the worst possible start, however, conceding a foul near the right touchline and then failing to track Leander Dendoncker who met Neves's dead-ball delivery with his head and guided it past Pickford into the far corner of the goal.

Alex Iwobi and Bernard came off the bench to replace Walcott and Anthony Gordon after 55 minutes but it made little difference to the pattern of play. Podence wriggled free in the box and fired across goal, an effort that Pickford fumbled badly but was fortunate to prevent the ball squirming over his goal line.

The Blues' keeper partially atoned for his latest gaffe by standing up well to put Jota off as the Portuguese raced into the clear having sprung the offside trap but it proved merely to delay a seemingly inevitable third goal.

Jota's run behind Michael Keane was picked out again with 15 minutes to go, and this time he rapped a shot inside Pickford's near post.

By this stage, Ancelotti had already put Moise Kean on for the frustrated Richarlison but Everton offered almost nothing in an attacking sense. Gylfi Sigurdsson had seen one decent chance to strike from outside the box blocked, Digne smashed a shot inches past the far post and Dominic Calvert-Lewin planted a header into Rui Patricio's arms but it was Wolves who should have added to the scoreline.

Patricio sent Jota away once more down the home side's left and he cut the ball across to meet the run of substitute Traore but, with the goal at his mercy, the winger could only turn his side-foot shot onto the crossbar.

It was a moment of mercy for an Everton team that didn't deserve any and, even accounting for injury problems and fatigue, Ancelotti must be concerned about the fragility, impotence and, perhaps most worrying, spinelessness of the squad he has inherited.

How much he and Marcel Brands are able to reshape the team in the transfer window remains to be seen but Evertonians are now just looking to be put out of their misery and for the season to end.