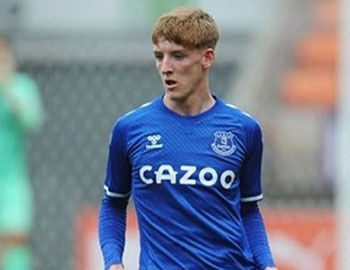 Anthony Gordon was the standout performer on the night, edging fellow teenager Niels Nkounkou who excelled at left back

Everton progressed to the third round of the Carabao Cup and a date at Fleetwood Town next week with a comfortable victory over League Two Salford City at Goodison Park.

The Toffees were leading at half-time thanks to Michael Keane's early header and eventually saw the game out by padding their lead with a Gylfi Sigurdsson strike and late penalty by Moise Kean.

Keane was the only player from Sunday's Premier League win over Tottenham to start the game — Lucas Digne came on after 24 minutes when Jarrad Branthwaite was forced off with an ankle injury — so it was a chance for Carlo Ancelotti's second string to shine and to press their case for inclusion in the starting XI on a regular basis.

It was an opportunity that teenagers Anthony Gordon and Niels Nkounkou grabbed with both hands, with the Frenchman emerging from the first half as the standout performer and the Scouser edging the man-of-the-match stakes overall by the final whistle.

Gordon twice struck the woodwork and laid on Sigurdsson's goal with an impressive second-half display while Kean had to be content with a goal from the spot after heading onto the bar and the post himself in what was a mixed showing up front.

In the final reckoning, while the margin of victory was comfortable, there was little to convince Ancelotti that any of the more senior figures in this evening's line-up should displace the eleven that kicked off the Premier League campaign in North London three days ago. In the absence of a proper pre-season, there may have been a degree of rustiness about the likes of Sigurdsson, Tom Davies, Theo Walcott and Bernard but more might have been expected against inferior, lower-league opposition nonetheless.

Walcott did well to get on the end of a dangerous ball over the top from Bernard in the third minute but could only guide a back-header over the bar before Gordon burst around the outside of the fullback to the byline but his cross was cut out for a corner.

Sigurdsson curled in the resulting set-piece and Keane rose easily to head home from close range to give Everton an early advantage.

Richie Towell forced the only save debutant Joao Virginia would be called upon to make all evening in the 10th minute with a rasping drive from 20-plus yards out while Davies flashed an effort across goal at the other end and Nkounkou almost surprised Václav Hladk but the goalkeeper blocked his shot from the angle.

Kean miscued a shot wide and Walcott blasted past the other post as the game went into a lull for the latter half of the first period but Bernard almost lit up the closing stages with a goal but Hladk made a terrific save, finger-tipping the Brazilian's accurate drive behind.

It was the visitors who had the first sight of goal in the second half when Bernard's clearing header fell to Jason Lowe outside the Blues' area but he slide his effort. At the Gwladys Street End, a glorious ball by Sigurdsson put a chance for Kean to double the lead on a plate but the Italian planted his header onto the bar instead.

More good work by Gordon saw the ball cleared only as far as Bernard in the 56th minute but he lashed a left-footer the wrong side of the upright before Towell ballooned a decent chance well over for Salford.

After Nkounkou's teasing ball if from the left flank had just eluded Walcott at the back post, Everton finally added a second and it was Gordon who was the provider once more. Driving in from the flank, he crossed low to Sigurdsson who swept the ball past the keeper first-time from a central position.

Hladky kept the score down with another excellent save to parry Walcott's shot behind, Jonjoe Kenny just cleared the bar with a curling shot and Sigurdsson grazed the post before Gordon rattled the upright with a superb curling shot from the edge of the box.

The teenager wasn't done tormenting Salford, however. He drew James Wilson into tripping him in the box with five minutes to go giving Kean the chance to make it 3-0 from the resulting penalty which he did with an elaborate stutter-step run-up and cool finish into the roof of the net.

There was time for a fourth which almost arrived when Sigurdsson slid a pass through to Kenny wide on the right and he picked Kean out with a pin-point cross but the striker's header bounced off the post and Gordon slammed the rebound off the bar.

In the end, apart from Digne, Ancelotti was able to keep his first-choice starters fresh for Saturday's league clash with West Bromwich Albion and allow his “B” team to get the result while Gordon and Nkounkou stole the show.

The win ensures that it is the Toffees who travel to Fleetwood a week today for a third-round tie which will also be carried live on Sky Sports.