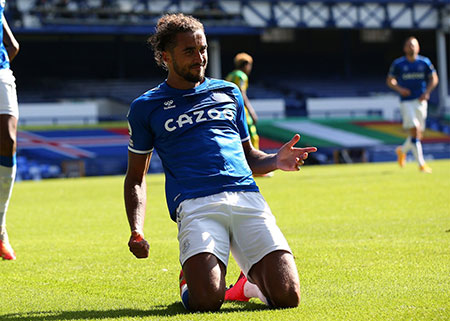 Dominic Calvert-Lewin scored his first hat-trick for Everton and James Rodriguez got off the mark for his new club as the Toffees battled back from conceding an early goal to eventually run out comfortable winners over West Bromwich Albion.

The Baggies had to play the second half a man down and with manager Slaven Bilic watching from the stands after Kieran Gibbs was sent off for striking Rodriguez off the ball and the Croatian received his marching orders for remonstrating with referee Mike Dean as the teams left the pitch for half-time.

For Everton, it was an early test of character for Carlo Ancelotti's tweaked team as they were forced to come back from a sloppy start that saw Grady Diangana fire the visitors ahead and Jake Livermore strike the post with a shot that would have made it 2-0 after 21 minutes.

Featuring the same line-up that started the victory over Tottenham last weekend, the Blues found their rhythm, though, and levelled through Calvert-Lewin, whose back-heeled goal after it had fallen to him off Darnell Furlong's head was initially ruled out for offside but then given after a check by Video Assistant Referee, Simon Hooper.

Jordan Pickford had already had to beat away one shot by Matheu Pereira and he parried another effort from the Brazilian 12 minutes before the break but after a succession of Everton corners came to nothing, James struck on the stroke of half-time.

The Colombian took a touch away from his marker on the edge of the area and fired a crisp shot inside the far post to make it 2-1.

The game had barely restarted in first-half stoppage time when Gibbs and Rodriguez collided, the Everton man brushed the West Brom fullback off and Gibbs retaliated with a hand to the former's face, earning himself an instant red card.

West Brom were undaunted as the second period got underway and they set about their task with the same energy with which they had done in the first. And when Allan fouled Pereira in a dangerous area outside the penalty area, the latter Brazilian curled the resulting free-kick into the top corner of Pickford's goal from 25-plus yards.

Everton were ahead again just seven minutes later, however, as their superior quality and numbers told. Richarlison won a free-kick of his own on the left, Lucas Digne swung the set-piece in and though Richarlison's initial header was pushed away on the line by Sam Johnstone, Michael Keane was on hand to knock the ball in for his second goal of the week.

3-2 became 4-2 eight minutes after that. James ended a patient sequence of passing outside the West Brom box with a beautifully lofted pass over the top of the defence, Richarlison touched it on past the goalkeeper and Calvert-Lewin slid in to toe it over the goal line.

And Calvert-Lewin completed his treble in the 66th minute after Digne's attempt from a direct free-kick grazed a defender's head and bounced off the top of the crossbar. Rodriguez delivered the resulting corner which Calvert-Lewin met with a header that flew past the keeper to make it 5-2.

Richarlison had the ball in the net one more time with a quarter of an hour to go but it was ruled out for offside and he also glanced a late header wide as the Blues coasted to their second victory of the new season.